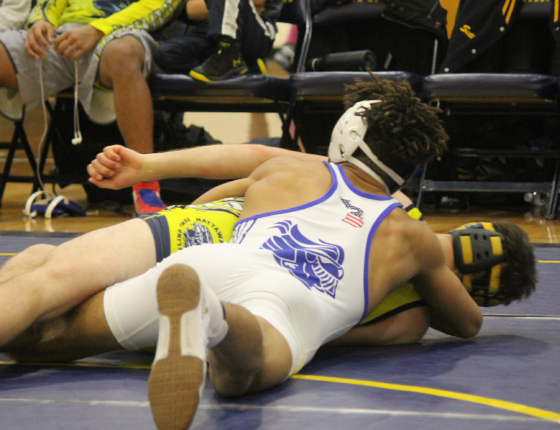 By Finn Brent
Leonardo Galasso, a Loy Norrix Freshman has been wrestling since the 6th grade. “It made me have to grow as a person,” said Galasso. It has helped him learn about himself and has turned into more than a sport. For Leo wrestling is a lifestyle.
Since 6th grade, Leo has come a long way. During his freshman year, he closed out the season with a 30-7 record. Additionally, he tied Loy Norrix alumni Nick May’s school record for tech falls. Tech fall is the term for what is basically a wrestling mercy rule. This happens when one wrestler is ahead of the other by 15 points during a match. Along with this, Leo led the team in takedowns this 2017-2018 season.
His victories haven’t come easily though, during his wrestling journey one of his personal heroes and friends, Dante Latorre, who he met through his coach, passed away behind the wheel while on the way to wrestling nationals in Virginia. Leo and Dante had styles that complemented each otherwell.
“He was like a big brother to me,” Leo recalled, “He was like one of the first people to believe in me.” Leo also said that Dante was a very talented wrestler, and 3rd in the state at one point.
During his wrestling journey, Leo met his personal hero, Coach  Nunez, former Loy Norrix wrestling coach and one of the first people to realize Leo’s talent, at a wrestling club. Coach Nunez has been a vital part of Leo’s journey in wrestling and has taken him under his wing to mentor him.
Not only has Coach Nunez helped Leo grow as a wrestler, but he has also helped Leo grow as a person. It’s possible to be a good wrestler, while not being the greatest person. Nunez has helped Leo realize this. And in Leo’s words Nunez taught him that, “Sometimes people will win, but really they’re just jerks.”
Coach Nunez has helped him learn that wrestling isn’t everything, and being humble will get you farther than being arrogant or boastful.
Nunez has been around from the start of Leo’s wrestling career. This includes many achievements such as fighting the way to the MHSAA regional meet as a freshman in high school, and  receiving an invite to a Michigan State wrestling camp over the summer of 2018. Much of this credit is given to his coach. Not all coaches or people have good morals, they may teach you a sport, but not lessons that apply to real life. Leo is lucky to have someone that does both.
Delete Image
Align Left
Align Center
Align Right
Align Left
Align Center
Delete Heading