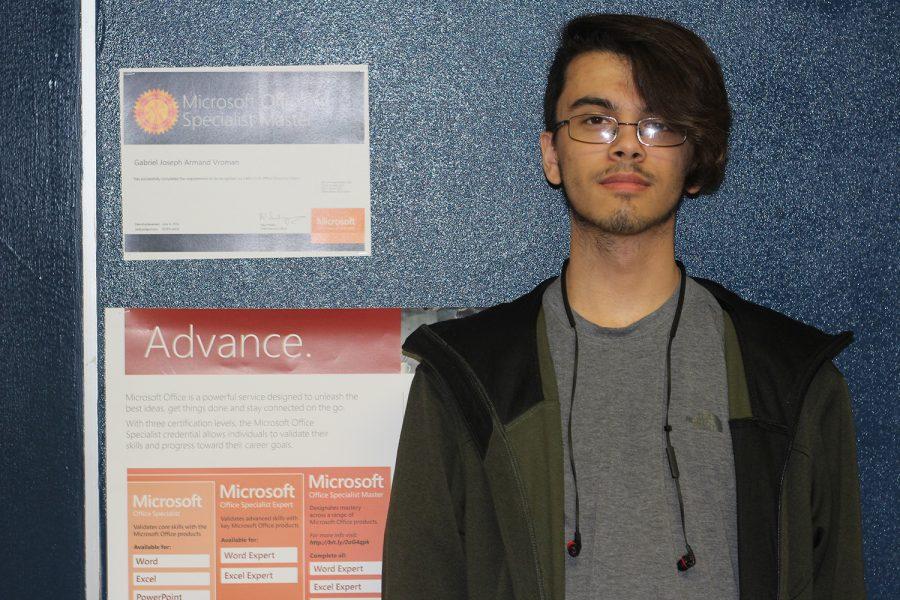 
By Finn Brent
On Friday June 8th, Loy Norrix Sophomore Gabriel Vroman completed his journey to earning the Microsoft Office Master Award.
To do this, he earned a Microsoft Office Specialist Certification in the Microsoft programs PowerPoint 2013, Excel 2013, and Word Expert 1 and 2 2013. He also earned  a 7 hundred out of one thousand or higher on the certification exams. There is more than one track to earning this award, and Gabe decided on the Word 2013 track and took an elective exam on PowerPoint 2013.
Earning this award is a big deal and also a landmark for our school as no one else, teachers included, have earned the Microsoft Office Master award.
Gabe described his journey by saying, “I played video games after every test and slept through a good amount of my classes.”
Gabe made his way to the reward under the guidance of Loy Norrix Business and Education for Employment teacher Beth Soisson.
This is a proud moment for Soisson. “This is not only the first  Microsoft Office Master Certification earned at Loy Norrix, but only 32 have been earned through this program in K12 schools in Michigan so far this school year,” said Soisson. “What an awesome goal this young man set and accomplished using the resources available in our business classes here at Loy Norrix High School.”
Through this award, Gabe has helped set a very high standard for not only Loy Norrix business students but business students of schools all over Michigan.
Delete Image
Align Left
Align Center
Align Right
Align Left
Align Center
Delete Heading