The Hype About Fashion Among Teens 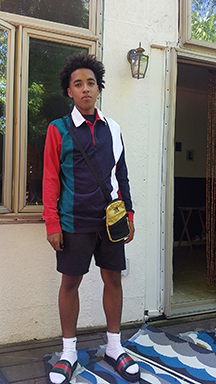 
By Jayden Millard
In the past few decades, fashion has blossomed into a huge influence on teenage culture. High school is a place where kids love showing off their clothes, but all too often kids take this fashion show too far.  Supreme, Gucci, Louis Vuitton, and Off White are all clothing brands that kids would almost die for, but they can certainly kill your pockets.
“In a month I spend almost $500 dollars on clothes,” said Diego Sandoval, a Loy Norrix senior. The budgets on clothes are getting bigger and bigger. “Almost every paycheck went to shoes at one point,” said Sandoval. Diego works at a local Footlocker to put all his hard earned money toward buying shoes.
Do teens just like to buy expensive stuff, or is it really the brands they love?
Junior Ty Pritchett said, “To be honest I just like the fact that it’s expensive. It could be the most plain shoe ever, but if it was $1000 dollars, I would buy it.”
There is a popular website called “Stock X,” and it is the biggest reseller site/app available.  Stock X is a resale app for very rare items with limited supply. According to Stock X, the number one trending and sold shoe is the Air Jordan 1, Retro High Satin Shattered Backboard. The selling price for this pair of shoes is $458! Streetwear culture for both clothes and shoes is only rising in younger generations, older generations do not believe in this so called “Hypebeast culture.”
Loy Norrix English Teacher Tisha Pankop was asked for her opinion on $500 shoes.  She said, “I’d rather take $500 to go buy a plane ticket and go visit a friend and do something amazing instead of wearing a supposedly amazing shoe,” said Pankop.
The pressure this type of expensive clothing puts on teens and also their parents is frustrating and can be very destructive to bank accounts. The average cost to raise a teen is over $233 thousand.
On top of that, the fact that most children want high-end clothing that can cost as much as $100 for a t-shirt is crazy! Even if the teen has a job, they go to school so they have to have a part time job that pays at most ten dollars an hour. Parents can get very frustrated if their kid is not focusing on their priorities. Going off and buying $500 shoes is typically not considered a parents priority. They almost have to win the lottery to pull this type of lifestyle off.
Delete Image
Align Left
Align Center
Align Right
Align Left
Align Center
Delete Heading