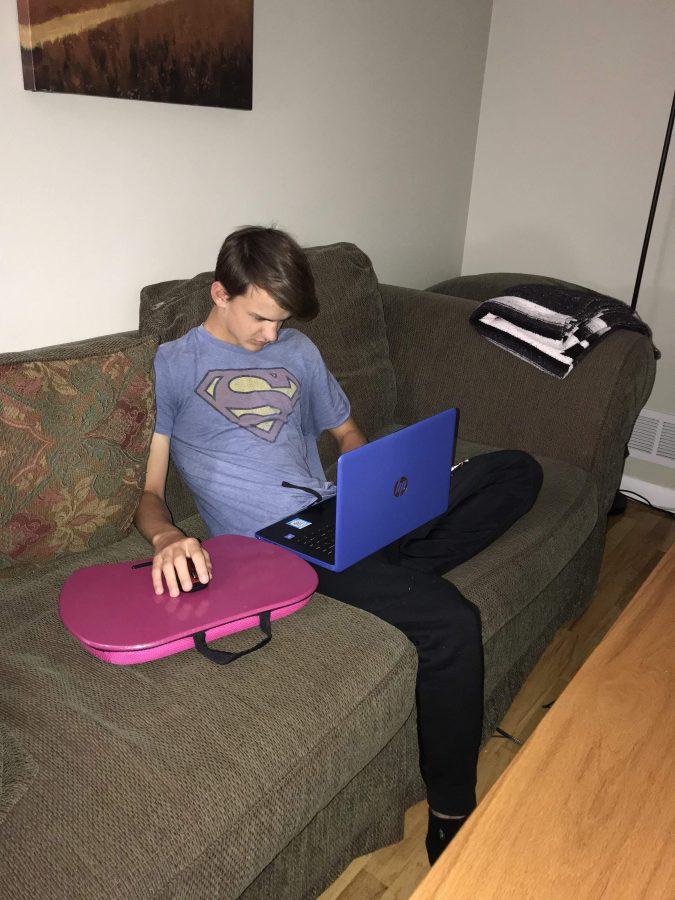 If you’re looking for a place where countless all-nighters playing video games with your friends while eating potato chips and drinking soda will come in handy, the Loy Norrix eSports club has a spot for you!

The eSports club is where gamers can get together and play video games either competitively or casually. Just tell Loy Norrix math teacher and eSports club organizer, Patrick Greely the game you want to play and who is on your team.

The eSports club met and practiced over the summer and during the first few weeks of this school year. Participants have been practicing their gaming skills at home so far.
Now, their hard work is about to pay off, as the competitive league recently started. The club registered for the high school eSports League on September 26th. Andrew Laboe, the athletic director, reports that the competitive eSports club at Norrix club will be playing teams from across the entire country.
The club may have registered, but the first match has yet to be played. When the first competition starts, the gamers will play their games from home. The participants will get into the game that they are competing in at the assigned time while logged into the High School eSports League website at the same time. The website will keep track of scores and players as they are playing the game.
Currently the eSports club has two groups playing two separate games: League of Legends and Smite. The objective of League of Legends is to destroy the enemy base with your team: this is an online, multiplayer game. Smite is also an online multiplayer game where the players choose gods and team up together in order to fight another team who have chosen their own set of gods to play with as well.
Some confirmed games that will be available to Loy Norrix players include: League of Legends, Heart Stone, Super Smash Brothers, Rocket League, Dragon Ball FighterZ, and Fortnite. Future games for the league are still being decided based on what is appropriate or not. Games such as Call of Duty, Rainbow Six Siege and Counter Strike: Global Offensive (CS:GO) are still under discussion regarding if they are appropriate enough to be played since they are very realistic shooting games.
The basketball game series of 2K is also still not confirmed yet because the developers of 2K are not yet on board with their game being played in the High School eSports League. However, in the future, the 2K series may be playable.
The main console that would be used for the club would be the PC gaming computer. Exceptions would be made for games such as Super Smash Brothers that are only available on certain consoles.
This is the first year that Loy Norrix has an eSports club to offer for students. Loy Norrix and Kalamazoo Central will be the first schools in the Southwestern Michigan Athletic Conference to have an organized eSports club.
When asked why he wanted to become the eSports director, Greely responded saying, “I’ve been playing video games my whole life, so when I heard there was a club I thought that’d be really cool.”
Greely is also trying to set up gaming systems at the school for casual players. Greely said, “I would like to get something set up at the school. There’s still a lot of questions I have to answer before I can give an official date, but I would like to have casual days where kids can just kind of show up and we can play and we can do some fun stuff.”
Greely also said that there s a local Loy Norrix vs. Kalamazoo Central gaming tournament in the making that will happen sometime this school year. The rivals would compete over a trophy to bring home to their school.
Opinions vary about if the eSports club is beneficial to the school within the student body. Senior, Caleb Young was asked if he thinks the eSports club is beneficial to students at Loy Norrix, he said, “Yeah, I do, because some people don’t play sports and their skills are in their fingers.”
However, when the same question was presented to 12th grader, Chase Wagner, he replied differently, arguing, “Not really, I don’t know. You can play video games at home, so why do it at school?”
Certain colleges are offering scholarships for eSports players. All those hours spent on video games during the summer and school year just might pay off. According to Scholarships.com, colleges offering scholarships to eSports players include, but are not limited to The University of California-Irvine, University of Utah, Robert Morris University, Indiana Tech and Stephens College.
If you want to receive a scholarship for your gaming skills, you may want to consider joining the eSports club in order to improve your skills and get recognized by colleges for your gaming skills.