Augmented Reality: The Future of Technology 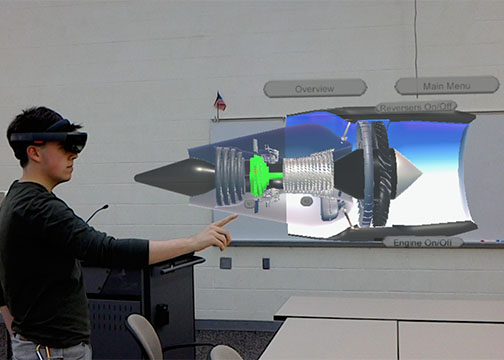 Nowadays, most Americans own cell phones. We can use them to text, call, look things up, play games and we’re still developing new capabilities. So, what if we could make these everyday activities even more streamlined? With the release of the iPhone X, Apple has introduced the ability to use augmented reality in its most basic form, but we can still go much further.
Over 100 years ago, L. Frank Baum, the author of “The Wizard of Oz” series, wrote a novel titled “The Master Key.” This book is known as the first recorded mention of the essential idea for augmented reality, the overlay of data into the real world.
Fast forward another 80 years to the development of the EyeTap by Steve Mann, who is known as “the father of wearable computing.” The EyeTap was a headset that took in recordings of the world around you and projected it onto the eye. The EyeTap can be viewed as the mother that birthed the Google Glass. Right now, there are multiple companies, like Google and Microsoft, who are working on developing programs that would allow you to do things like type on a keyboard that was only visible on your AR headset. Programs like these are the driving force for developing newer and better technologies.
Since the EyeTap, augmented reality (AR) has been making tremendous strides the world of technology, but what can it be used for in the future? AR has the ability to take everything your phone can do and then apply software to create better AR games, reconstruct ruins, design buildings and many other possible developments. One of the biggest things to look forward to is the application of AR in education. With AR, a teacher can now display and interact with full 3D models that the entire class can see. In fact AR is already starting to be integrated into modern education.
Associate Professor and Researcher at Western Michigan University’s College of Aviation, Lori Brown, was chosen by Microsoft for their for its “Women in Mixed Reality Spotlight Partner Program” to use the Microsoft HoloLens in their aviation program.
In school, it’s hard to put what you learn in the classroom into practice, but with AR the process becomes more streamline. “There is a gap between the classroom and the simulator. AR fills those gaps by providing an experience that bridges what students learn in the classroom and in the aircraft simulator or airplane and allows them to practice and be totally immersed,” said Brown.
However, not everyone is on board with the implementation of AR into everyday life.
One of the biggest issues of new technology is making sure that there are proper defenses in place to protect from hacking.
“All it takes is one hacker to figure out how to mess with those things,” said Loy Norrix senior, Tom Rossi.
If someone were to hack your AR device, you could be looking at an extreme invasion of privacy. The way most modern AR systems work is by recording and then projecting an image onto the glass or the eye, so if somebody were to gain access to this feed, they would be able to see everything you do.
Introduction to Information Technology EFE teacher Rostam Ahmad Daud said, “With augmented reality everything is being observed, it’s being recorded. This could easily compromise a lot of information.”
Amongst security reasons, there are also dangers to your mental well-being.
If you were able to sit at your house and do all your work from your AR system, it could seriously cut on your time interacting with people. There are also still physical dangers of AR. Pokemon Go, an app for smartphones released in 2016, had a big focus on using AR as apart of the game. But Pokemon Go also showed us that there are risks to walking around with some form of a screen in front of our face. A study by Purdue University shows that as of November, 2017, Pokemon Go has caused 2 deaths, 31 injuries, and over $500,000 in vehicle damage.
Ultimately, while AR has many practical applications, there are still plenty of risks that come with it. As we learn more and more about what we can do with technology, we run into equally as many issues. Practical AR devices are still a long ways away, but before we can even consider releasing them to the public, we need to make sure that all the kinks are worked out.