Students Rush to the Polls in the Mock Elections 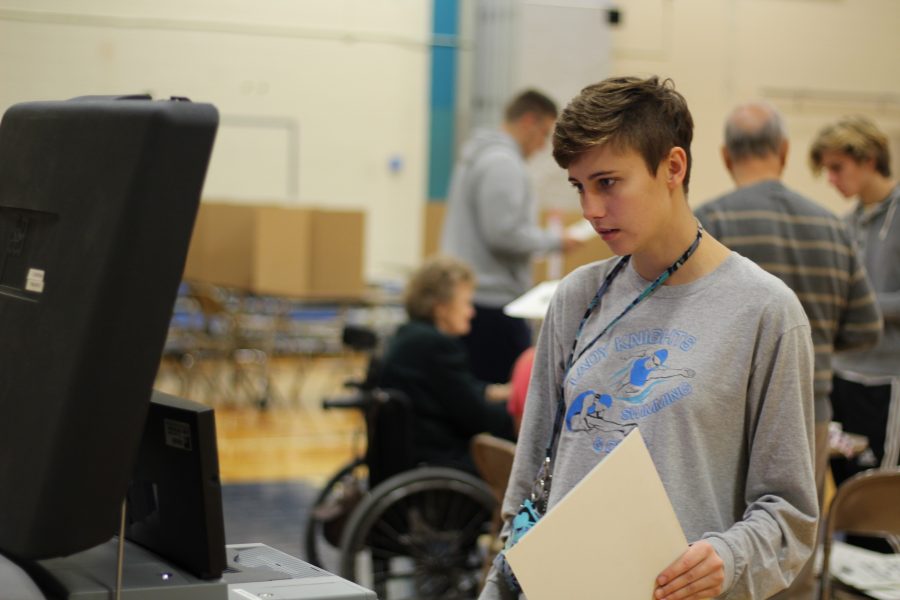 Junior Caila Chapman submitting her ballot to the tabulator. This is the last step of the voting process. Photo Credit / Gavin Rutherford

With the rise in political tension these past few years, there has been a lot of pressure on young people to get out and vote in every election they can. The League of Women voters is coming to high schools to help educate more young people on just what voting entails.
On Tuesday, October 23, the League of Women Voters of the Kalamazoo Area came to Loy Norrix High School to hold a mock election. Juniors and seniors were called down to the back gym where they would go through a voting process almost identical to what will happen on election day.
With so many students already or approaching 18 years old, the league wants to make sure that today’s youth will be ready to help carve the path for the future.
“We come to the high schools and we do a program that tells people how to vote, where to find information about voting, what it takes to be a registered voter and where to find non-partisan information, because that’s the point of the league, we’re non-partisan,” said Merrikay Oleen-Burkey, the president of League of Women Voters of Kalamazoo. “So we don’t align ourselves with either candidate, with either Democrat or Republican, Libertarian or Green Party, we don’t sign up with that.”
Loy Norrix had 341 students participate in the mock election. If this were the actual elections, the voting results of the students of Loy Norrix would be as follows:

The majority of students also voted “yes” on all three proposals focused on recreational marijuana, reforming gerrymandering and voter registration.
Presidential and midterm elections are extremely important to upholding American Democracy. For those of you who are over 18 already, the actual midterms are Tuesday, November 6th. For those who aren’t yet 18, look forward to the presidential election in 2020.