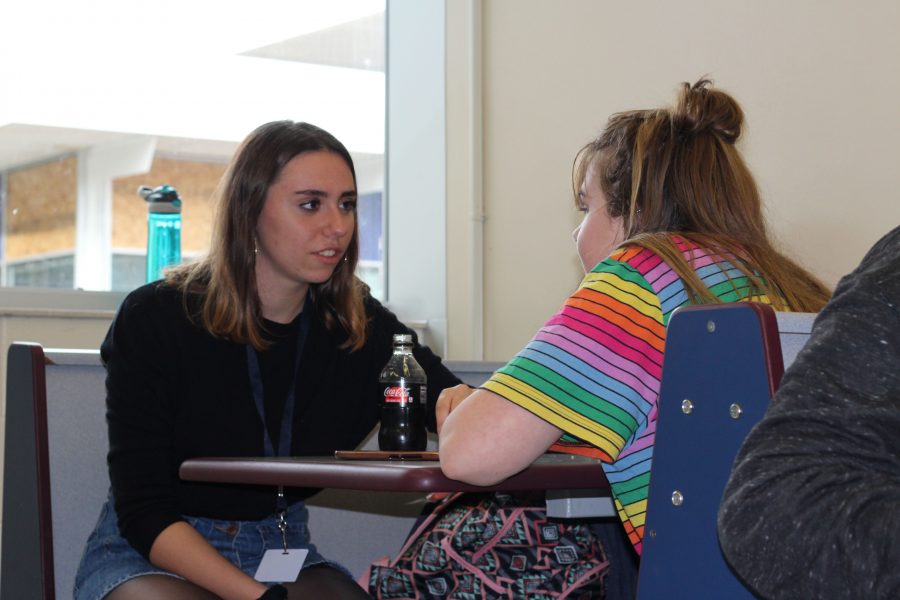 Paula speaking to her friend during A lunch.

After a nine hour plane ride from Madrid, Spain to an airport in Chicago, Paula Montoro was just about to board another plane to Kalamazoo when she was greeted by her host family with three balloons. They had driven up to meet her at the Chicago Airport. They conversed and got to know each other a bit before Paula got on the next plane ride which would take 45 minutes.
“They were really cute, and since the first time of seeing my host parents I liked them,” said Paula.
Paula arrived in Kalamazoo at midnight. A week later she would have to start going to a new school with new people she had never met before. She also would have to use a language she is not used to speaking and adjust to being far from her family in Spain.
Paula is currently a junior and is a literary artisan. At the age of three Paula began to learn English, as it is very common for many kids in Spain to learn another language at a young age. Paula misses her country, as well as friends, family, the food, and her pet labradoodle, Mary.
The food in Kalamazoo and the food in Spain is pretty different as well. Food in Spain tends to be healthier than the food in Kalamazoo. In Spain, American fast food restaurants such as McDonald’s are also very well known and enjoyed by many. Paula likes McDonald’s food better in Kalamazoo than in Spain.
As fall and winter approached, Paula had not yet decided on her Halloween costume. Most holidays that are celebrated here in the U.S. are not celebrated in Spain. Santa Claus is a new subject to Paula. In Spain, instead of Santa there are the three wise men. The way Paula’s family celebrates New Years is by eating 12 grapes, 12 seconds before midnight.
In Spain, Paula had a little brother who will turn 14 in November.
“He is very different from me. We would always disagree and he would always mess around but I miss him,” said Paula.
Coming to Kalamazoo, Paula gained a host sister, Jeanie Gould-McElhone. Jeanie’s family previously had another foreign exchange student, who came from Japan.
“We heard a foreign exchange student needed a home, so we just offered to give them one,” said Jeanie.
The family thought it would be an interesting experience and an opportunity to learn and get to teach about a new culture. After their experience with their first foreign exchange student, three years ago, they decided to accept another foreign exchange student, this time with someone who was from a Western European country where there is not much of a cultural difference.
Jeanie is an only child and she is still adjusting to having another person in her home. It has not been bad, but it has taken her some getting used to. They enjoy watching TV and movies together.
“It is sad when they leave but you have a good time with them. Hopefully they come to visit. Our foreign exchange student from Japan is going to come and visit us, and I hope it will be the same with Paula. Either we go see her or she can come and visit,”  said Jeanie.
Paula’s transition was made easier by her host family. They remind her of her parents at home, just that her host parents are bit older.
“It’s ironic, in Spain I would listen to more English music than Spanish, and now it is good to hear some Spanish after a whole day of English. It reminds me of home,” said Paula. She also put up photos in her room to help her feel like she is more at home.
In IES (International Education of Students) Joaquin Araujo, Paula’s school in Spain, there are around 6 hundred students, compared to Loy Norrix which has over 16 hundred students enrolled. Paula was one of 500 students to receive a scholarship to travel and expand her English language.
Paula’s first day at Norrix was far from a breeze. She missed the first week of school and was struggling to catch up. The language was also a struggle. The diversity at Norrix and the assistance of peers and teachers has made Paula feel accepted at LN.
As days have gone by it has gotten a bit easier for Paula to understand American English, though people struggled to understand her due to her accent. Paula has very much enjoyed her time at Norrix and the teachers. Paula feels that the teachers are way more involved in their students’ education then they are in Spain.
The classes that Paula has are very different in the U.S. than in Spain. Electives such as journalism are not provided in Spain.
Paula has A lunch at 10:40, this lunch time for her is very early and odd to her. Students in Spain typically get a 3 p.m. break then come back to school a hour later. In an average school day in Spain, Paula has around 11 to 12 classes a week, class time is shorter, and every day she has different classes.
As Paula continues her year here at Norrix she wants to continue experiencing things such as snow and maybe even participate in a school sport. She is not that good at sports, but still wants to try and be more involved in school activities.
Paula said, “I want to grow a little more as a person with this experience and meet new people. I am very thankful to have this opportunity.”
Click Here To Read “Adopting a Year-Long Sibling: A Loy Norrix Student’s Experience with the Foreign Exchange Program”