The Slack Year: Senioritis and How it Could Affect our Graduating Class 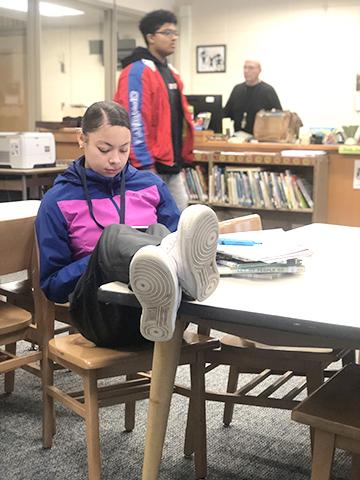 It’s 7:20 am, and you snooze your alarm for the fourth time in a row. Debating on if you can afford another absence in that class, your reluctantly roll out of bed throw on sweats and a hoodie. On the way to school you stop for coffee because you’re already late so why not make the pass worth it. Finally getting to school around 8:00, you wonder “Why didn’t I just stay home?”
Senioritis in general is the feeling of being extremely tired, drained, stressed and just the overall feeling of being done with school.
According to Loy Norrix psychology teacher Rebecca Layton, senioritis is when “effort levels go down exponentially. Students will have an ‘I don’t care’ attitude and are relatively cranky.”
Students of all grade levels can experience the symptoms of senioritis: the stress, tiredness, and feeling of not wanting to go to school. However these symptoms have been given the term, “senioritis” because of how much more it affects seniors over other students.
A common symptom of senioritis is not caring about appearances anymore. Many seniors don’t put in as much effort into their appearance and can be seen strolling the hallways sporting their messy buns and sweats. According to senior Tanaja Hudson, one of the biggest signs of senioritis is appearance.
“The way you dress, just putting on anything, the hair, physically through their appearance,” said Hudson.
Senioritis can also show through academics, “Seniors will pick classes based on what’s easy or they’ll come in late everyday,” Layton explained.
Though senioritis doesn’t seem like a big deal, it can be very detrimental to students who don’t get it under control in time. Senior Nikia Harris sees senioritis as a large obstacle for herself and fellow students.
When asked if she feels like senioritis could prevent some students from graduating she said, “For some people they fall behind and feel like they can’t catch up so they just stop trying, they give up and just don’t finish it out,” Harris said.
Some students have the ability and commitment to bring their grades out of the gutters, that is, if that student allows for their grades to get that bad to begin with. For other students, missing class, being late and their lack of interest in school will come at the cost of graduation.
There are a few realistic ways to prevent or stop senioritis. The most helpful tips from Layton were, “One, you have to remember that that you aren’t done yet. Second, I think you need to have some priorities because what happens a lot is people burn out. They’re trying to do 8 thousand things and they feel like ‘I’ve expanded so much energy, I have no energy left to do the things.’”
Layton suggests prioritizing based on what’s valuable to you, like choosing classes you care about and will actually attend.
“Inertia is bad, once you stop… getting going again is really hard,” Layton warns seniors.
The best way to power through senioritis is to never let it get to the point where you just stop coming to school or stop going to particular classes. This year, we have the opportunity to have the largest graduating class at Loy Norrix. Most of us just want to graduate and be done, so let that be the deciding factor and not the easy way out.
Delete Image
Align Left
Align Center
Align Right
Align Left
Align Center
Delete Heading