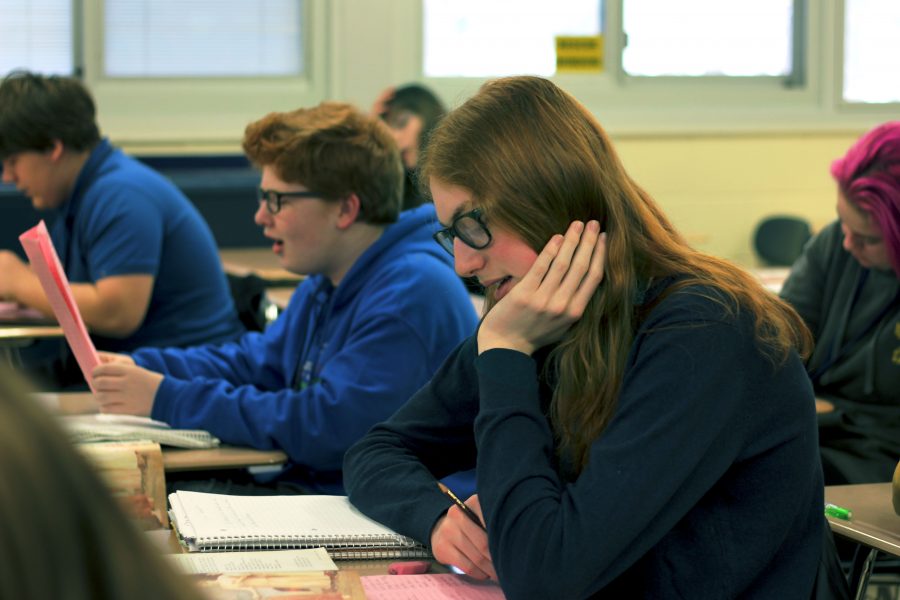 
Walking into Loy Norrix High School for the first time is overwhelming for everybody, but not many experience the drastic change that Elliot Russell did when he started as a freshman this fall. Russell is one of eight students to transfer from Kazoo School, Kalamazoo’s smallest independent private school. While Kazoo School has a student population of 81 people, Loy Norrix has a total of 1,637.
“It was definitely overwhelming, and I didn’t know where to go. I was just walking through the crowds of people,” said Russell.
However, despite the massive, nearly 2,000 percent population change, Russell is finding that he and his fellow Kazoo School alumni are adjusting quite well to Loy Norrix. An active member of the new eSports team, Russell is happy to have found his own little corner in the chaos and is grateful to have his teammates to help him out at school. Like extracurriculars do for most students, eSports has been a great way to make one of Kalamazoo’s largest schools seem a bit smaller and a lot more welcoming for Russell.
“Elliot has been an important part of the team since the first day,” said math teacher and eSports supervisor Patrick Greeley. “He has been very supportive of the other players on the team and has even acted as a commentator for one of the team’s matches. He started the season as a player ‘on the bench’ but he has since worked his way regularly into matches.”
Greeley also added that he is “happy that the eSports team is becoming a place where anyone can feel welcome and included.”
This team is not the only safe place for new students. Russell also has friends from Kazoo School who are involved in the Gender-Sexuality Alliance. Another friend participates in the school’s Dungeons and Dragons club, SWORD, and one has an interest in playing hockey. It seems that everyone has found their niche.
Among the various benefits of Kalamazoo Public Schools, like the extensive list of extracurriculars Russell and his peers enjoy, there is one that goes unmatched: The Kalamazoo Promise.
“I’m really excited for that [the Promise scholarship]. Because of it, I’m going to try to go somewhere in Michigan,” said Russell.
Although Russell only started attending KPS in ninth grade, he will have over half of his college tuition paid for with the Promise. With the average college tuition in Michigan being $14,160 a year, this is certainly a gift he recognizes and is grateful for.
Overall, Russell is happy with the switch from private to public school, and so are his parents, he says. They find the opportunities Norrix offers very different from those at his former school.
Kazoo School, with its small class sizes and emphasis on creativity and individuality as opposed to grades, is on the complete opposite end of the spectrum from a traditional public school. So naturally, one might expect Kazoo School parents to favor another private, similarly progressive school for grades 9-12. However, every single one of the eleven students in Russell’s previous class is continuing their education at a public school. Eight attend Loy Norrix, one goes to Portage Northern, one moved to Kalamazoo Central, and one now lives out of state.
In fact, interest in private schools is declining nationwide. According to the “Wall Street Journal” and the U.S. Census Bureau, private school enrollment dropped 14 percent from 2006 to 2016 and is still going down. It seems that public schools are far richer when it comes to extracurriculars, diversity, and real world experience.
Russell agrees, he sees a bright future at Loy Norrix, largely because of his new favorite extracurricular and the generous Kalamazoo Promise.
Although unafraid to admit he was nervous at the start, when asked what advice he would give his past self about transferring to Loy Norrix Russell responded, “It’s a lot easier than it initially seems.”
Delete Image
Align Left
Align Center
Align Right
Align Left
Align Center
Delete Heading