Loy Norrix Twins Describe What It’s Like Being Identical 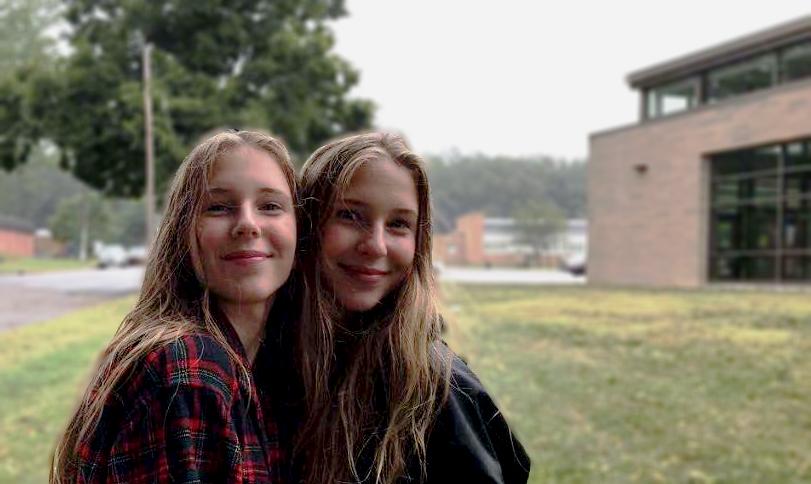 
“Wait, which one are you again?” This is a question that twin sisters, Eva and Zoe Bugnaski get quite often. Why? They look exactly alike.
Eva and Zoe have been living together and eating together their entire lives. They even shared the same womb and have been expected to share everything since then. This can be frustrating for any teen who wants to form their own identity.
“People not knowing my identity, it always goes back to ‘Are you Eva or Zoe?’ Even after a full conversation. Specifically with teachers that know both of us,” said Eva explained is one of the negatives about being a twin.
Since twins are so rare, people are interested in the twin lifestyle. According to Insider, only about 3 percent of the population are born as twins. Even if twins look the same, they are still their own person. Despite having the same gene set they have different fingerprints, and different personalities.
“The worst part of being a twin is having close to no independence in my daily life- being hard to identify, though it’s regular, can be very demeaning sometimes; it feels like I’m not my own person a lot of the time because people see no differences between us,”said Zoe giving her take on the down sides of being a twin.
Most people know that twins have a special connection, that only other sets of twins can understand since it’s so different than other sibling bonds. It’s believed that twins have a telepathic connection. This is where the term, “Twin Telepathy” comes from.
“Twin telepathy is definitely not real,” Zoe said, “but sometimes Eva and I have mixed memories from things in the past that both of us believe that we alone experienced. Also, we remember having the same dreams sometimes.”
“We’ve had the same dream before and situations where we were convinced we’ve had the same memory,” Eva agreed.
While there are negatives and annoying things twins have to deal with, it does have a lot of perks. It’s like being assigned a best friend at birth and having a best friend with that type of connection is uncommon. It’s hard for non-twins to understand.
“I think it’s really hard for anyone who isn’t a twin to understand what it’s like, which is a super weird part about having one,” Zoe said, “talking to other identical twins is really interesting, but even that isn’t the exact same thing one has with their own twin.”
Delete Image
Align Left
Align Center
Align Right
Align Left
Align Center
Delete Heading