Proposal 1 – What You Need to Know 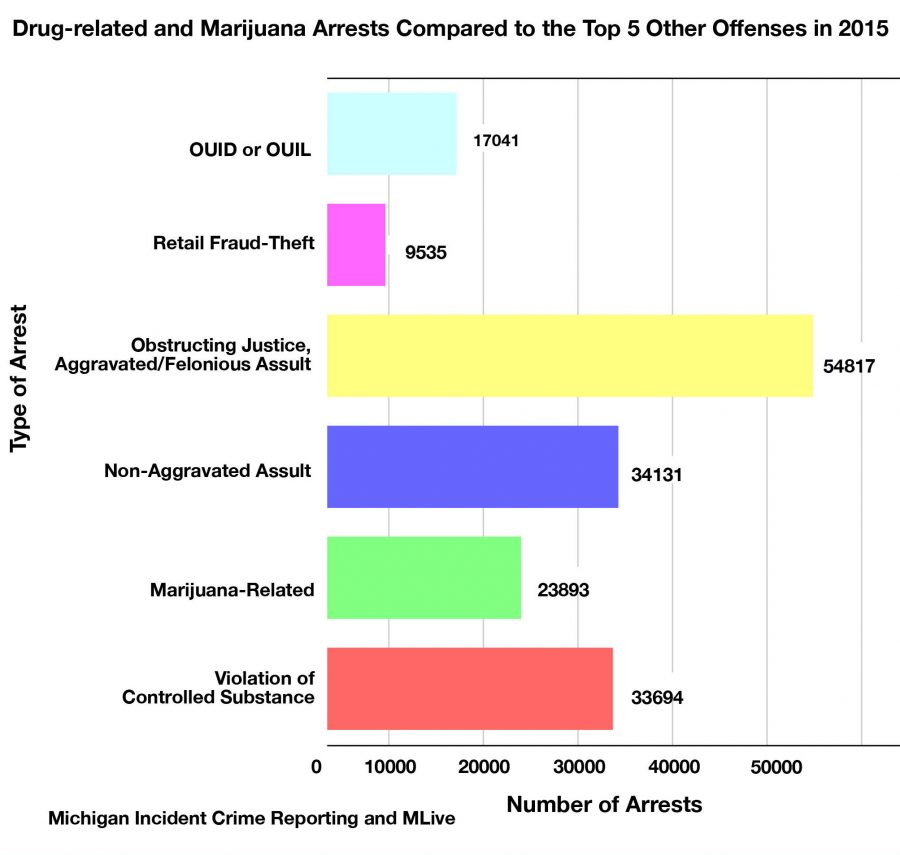 In the early morning on Wednesday, November  7th, the day after the midterm elections, Michigan residents woke to the news that Proposal 1 had been approved by voters, a move which legalized recreational marijuana for adults over the age of 21.
The state and Loy Norrix High school were abuzz with discussion of the issue. Whether it was joyous potheads, or embittered advocates determined to follow federal law, everyone seemed to be talking ab
How Legal Is It?
While the election’s results did legalize marijuana, cannabis enthusiasts around the state shouldn’t be so eager to light up. The law did not fully take effect until December, and pot retail shops won’t be allowed to open until early 2020. While cannabis has been legalized, it hasn’t been decriminalized by this proposal.
Legalization means you can’t get arrested, convicted or ticketed for marijuana as long as you follow the restrictions and laws concerning it.
Decriminalization means that states no longer prosecute people for having a small amount of marijuana on them if they are not intending to sell it. While marijuana would still be illegal, it would be treated more like a traffic violation, as you wouldn’t be prosecuted and therefore can avoid a criminal record.
About 9% of all arrests made in 2015 in Michigan involved weed. In Kalamazoo county, 6% of all arrests in 2015 involved marijuana, according to MLive. The graph to the right illustrates the fact that there is a disproportionate amount of people in jail for something that has now become legal.
Sheldon Neeley, a democratic representative in Michigan’s State Congress, has proposed a bill that would make it easier for low-level marijuana offenders to have their records expunged or sealed.
Governor-elect Gretchen Whitmer has also discussed possible clemency for numerous low-level marijuana offenders. 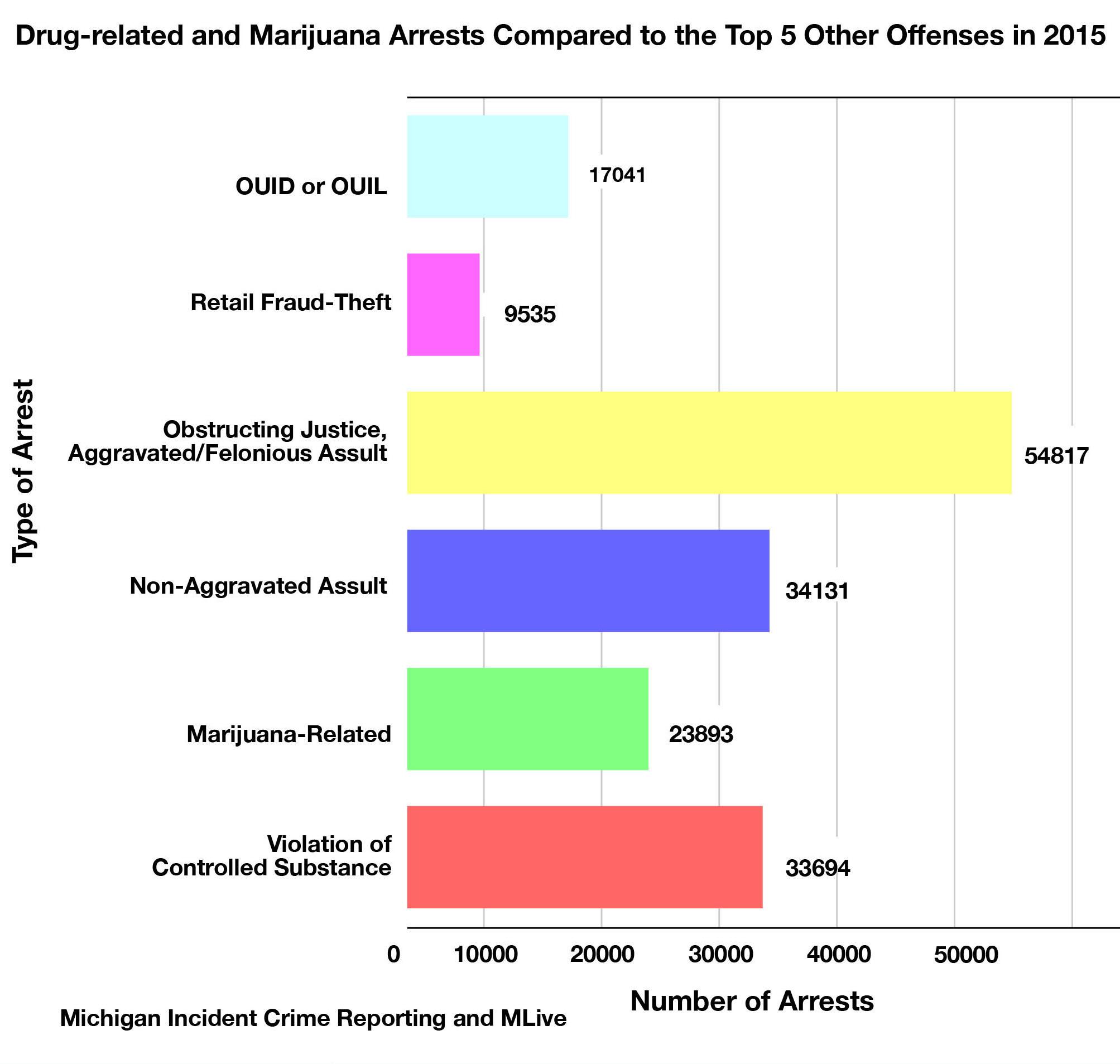 How Will it be Regulated?
There are many speculations as to how marijuana will be regulated. Michigan is looking to other states that have legalized recreational marijuana, such as Colorado and California. These states regulate marijuana similarly to alcohol in that you have to be 21 to be involved in a business or use it, and there are strict restrictions on how pot shops can operate. Most are satisfied that these restrictions will ensure that marijuana will not put any of the population at risk.
Loy Norrix sophomore Haley Lankerd, when asked what she thought regulation would look like replied, “ Honestly, I don’t know what regulation will look like. I feel like rules will still try to be put in place when it comes to it. Knowing how it was used when it wasn’t legal, I feel like some people won’t listen to the regulations and carry on with what they were doing.”
For those that share her apprehension for legal weed, the proposal gave municipalities the option to ban marijuana retailers from selling in their county. This means that while one county may allow pot to be sold in a business, another may not. Adults that want to use marijuana must be aware of local laws concerning it.
Additionally, according to federal law, marijuana is still illegal. Despite changes in many states’ laws, according to “Safe Access Now,” “Under federal law, cannabis is treated like every other controlled substance, such as cocaine and heroin.” Marijuana is also illegal in a large number of states across the country. A person traveling with marijuana from a state where it is legal to a state where it is illegal will be subject to that state’s laws regarding marijuana related arrests.
According to The Detroit Free Press, Michigan’s law will have these restrictions:

Allow individuals age 21 and older to purchase, possess and use marijuana and marijuana-infused edibles and grow up to 12 marijuana plants for personal consumption.
Impose a 10-ounce limit for marijuana kept at residences and require that amounts over 2.5 ounces be secured in locked containers.
Create a state licensing system for marijuana businesses, including growers, processors, transporters and retailers.
Allow municipalities to ban or restrict marijuana businesses.
Permit commercial sales of marijuana and marijuana-infused edibles through state-licensed retailers, subject to a new 10-percent tax earmarked for schools, road and municipalities where marijuana businesses are located.
Possession of [up to] 2.5 ounces [will be allowed] on an individual’s person.

How Does it Affect Minors?
The biggest concern of most people who voted no on Proposal 1 had was the concern about minors and marijuana. According to The National Institute on Drug Abuse for Teens, marijuana use in people whose brains have not fully developed can cause long term detriments. These impairments include poor memory, concentration and judgement skills.
The concern that teens would have easier access to something that could affect them developmentally is not something that should be taken lightly. This is one of the main reasons the law is so restricted.
Lankerd shares these concerns stating, “I think it will be easier in some ways. Teens buy it from sellers and now that it is legal it will be easier for sellers to get it and therefore easier access to teens.”
The opposing side argues that making marijuana legal in the way that alcohol is legal makes it harder for teens to buy marijuana. Marijuana would also only be legally sold through registered, licensed shops and would likely be subject to purity tests. These quality controls could help to eradicate weed that could be laced with harmful additives such as formaldehyde. Legalization with regulation for marijuana like alcohol, can make it harder for teens to get it, and if they do, it will most likely be safer than the marijuana they could get on the streets.
Daniel Isacksen, a Loy Norrix sophomore, said, “I think it’s going to be quite strictly regulated too, so I don’t think there are going to be very many problems with like underage kids getting sold it. I think it’s going to be quite strict. I think it’s going to be about the same, obviously there will always be older people selling it to younger kids, but I don’t think the kids will be able to get it directly from dispensaries.”
Is the Legalization Debate Over?
Legalization with regulation in a handful of states does not mean that the debate over legal marijuana is over, but it does highlight a change in the cultural perception of the drug. People no longer think that marijuana is equivalent to hard drugs such as heroin, and many are turned on to the medicinal values it presents. This legalization by states will most likely lead to an even greater cultural acceptance of it, until it is regarded much like alcohol.
Marijuana still carries many negative connotations and is unlikely to become legal nationwide in the next ten years, as evidenced by the provision that allows municipalities to ban marijuana. Former Attorney General Jeff Sessions was adamantly against marijuana, and there were rumors that he would start cracking down on states that had legalized it.
According to The Boston Globe, Interim Attorney General Matthew G. Whitaker might be less stringent. The Boston Globe writes, “During a 2014 primary debate for the Republican U.S. Senate nomination from Iowa, Whitaker sympathized with patients who benefit from marijuana ingredient cannabidiol (CBD). But he also voiced concerns about the disconnect between state legalization efforts and the enforcement of federal law under the administration of Former President Barack Obama.”
While the passing of Proposal 1 may have seemed like a victory to some, its actual legality is precarious, as the federal government could overturn this law if they wanted to.

Click the link to view “What Does Loy Norrix Think of Proposal 1?”