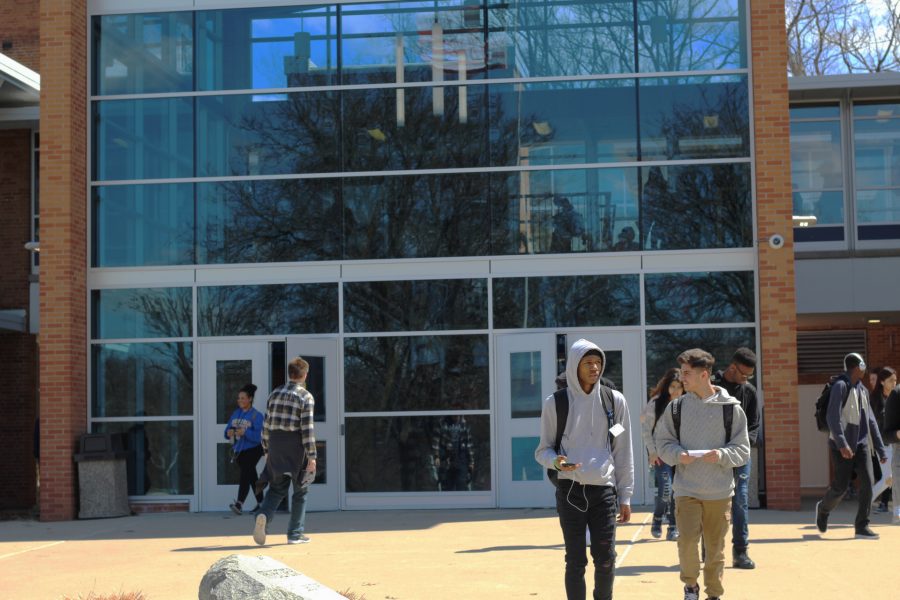 Students leave Loy Norrix at the end of the day. The Tower marks the beginning and the end of each day. Photo Credit, Kailynne Besser

Walking into Loy Norrix in early September, you look around and notice the new updates that have been done all around the school over the summer.
Updating the windows was one of the primary changes that occurred at Loy Norrix. The front entrance or “Tower” was newly updated with a replacement of the exterior glass and entrance doors. About 80 to 90 percent of the tower was originally single-pane glass, which provided poor insulation and allowed huge amounts of heat and air conditioning to escape, increasing energy bills.
With the old single-pane windows, the tower used to get unbearably cold throughout the winters and would tend to overheat to the point that it was hotter than the rest of the school in the springtime. The only time during the school year the tower wouldn’t be too hot or too cold was late fall.
“The tower is 100 percent warmer,” said campus safety officer Jacqueline Hampton, who is often positioned in the tower, monitoring security feeds and handing out passes.
You might have noticed that when you come into the school, the door is no longer unlocked. The external doors in the school were replaced and new locks were put on the doors. The doors are locked at all times. You have to wait for someone in the tower or office to open them to be able to get in to the school .The updates on the doors and locks have been put in place in order to increase the safety of the students and staff.
“The updates are great. They make the school look better, but more importantly, they’re much more energy-efficient,” said Principal Christopher Aguinaga.
“I am glad that they are doing updating to the school, but with the updates they should do more like the heating system,” said junior Caila Chapman.
Another noticeable change to the exterior of the school is the new color. Formerly teal, all of the colored external panels on the school have been made blue to match the school colors. The new blue exterior modernizes the street appeal of the school.
The changes were done over 2 summers to minimize distraction to the learning during the school year. The process really started after the last bond proposal was passed, where a community input process was used to help decide what the replacement was going to be in the terms of the glass and the exterior color of the building.
After getting the input from the parents, different community groups, teachers and students, it was clear that it was going to be way too much to do in one summer just given the square footage of the building.