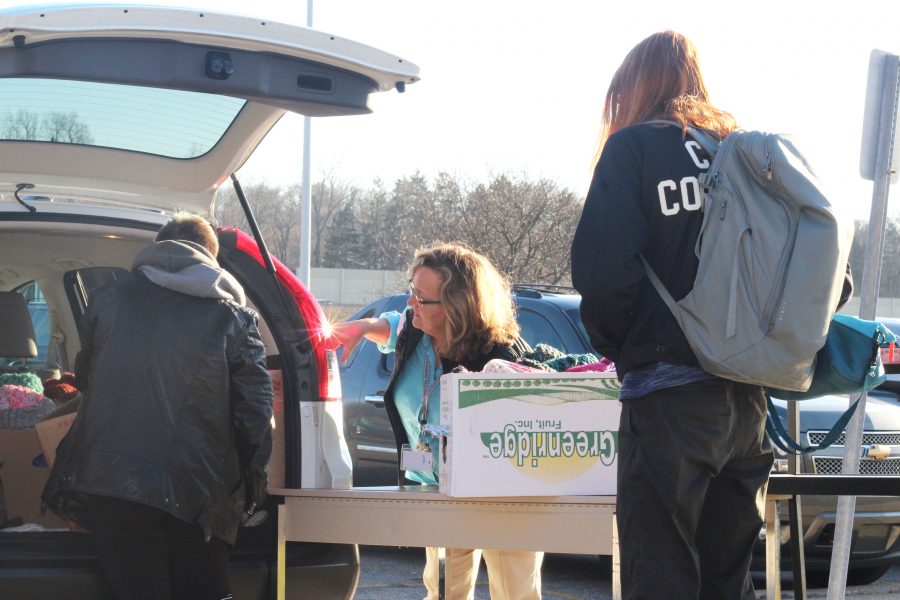 Out of over 2 million children in Michigan, more than 356 thousand families with children struggle to have enough food. There are kids who rely on school provided meals to get them through the week whose families can’t always afford to put food on the table or into their lunch bags.
Loy Norrix PeaceJam, a community service-based organization, along with individual members from the National Honors Society and Link Crew, have made providing food for the families in Loy Norrix one of their many goals.
In the winter of the 2018-2019 school year, over 4 thousand items were donated to the Loy Norrix food drive, and over the last four years, the LN community has raised over $6,000 dollars for Loaves and Fishes. These acts provide for the needs of the Kalamazoo community.
Loy Norrix has been participating in the food drive since 1997. At first, the food drive was run by the Kalamazoo Area Food Drive, originally the Black Police Officers Food Drive, where LN dominated other schools in the district in the number of donations students collected. In 2014 the Kalamazoo Area Food Drive was disbanded and Loy Norrix PeaceJam took things into their own hands.
Originally the drive provided for 100 Norrix families and this year expanded to 110 families according to Sveri May, a Loy Norrix teacher and PeaceJam advisor.
PeaceJam quickly leapt on the idea when it was proposed and many students joined in. Soon a sense of competition arose among classrooms as they competed to gather the largest amount of food to donate, but students weren’t the only ones lending a hand.
“With the help of the following local businesses, and of course the Loy Norrix students, we made it happen,” said May.
Local businesses, like Meijers, D&W, Hardings, and Sam’s Club, provided financial help for purchasing flour, sugar, and a lot of the loaves of bread each basket receives.
Kalamazoo Public Schools has proven itself a supportive community of teachers, parents, and students. The food drive isn’t the only example of what Norrix does to help its students but it is a standout example.
Communities in Schools, along with organizations like PeaceJam, provide support for the LN family.
“Our district through Community in Schools has food banks in the schools, and for elementary schools backpacks filled with many items to help families get through the weekend, we have Loaves and Fishes, a local food bank, for families as well. Our district does a great job helping students and their families in need,” said May.
Students at Loy Norrix like senior Emma Knutson have helped to spread the view that LN is one big, disjointed family, and that it’s students are more than willing to help each other.
“I feel like, as Norrix, we’re given a reputation that all we do is fight. But really we’re just one big family. I feel like I’m blessed to have what I have so I should spread it around,” Knutson said.
The Loy Norrix food drive creates an opportunity for school bonding through a little competition. The top three classes that bring in the most food donations receive a large muffin and juice after the food drive. The top three classes this year were Richard Rashad and Sveri May’s, Matthew Porco’s, and Paige Carrow’s classes whose donations totaled at 2,411 items.
The top individual donors receive gift cards from various business like La Cantina’s, Texas Roadhouse, Cafe Meli’s, Skyzone, and Olive Garden.
Not only this, but the food drive and other school-wide fundraising also plants the idea that young adults can do something to help their community as well as promoting student unity. Students have the ability help and support each other. The adults aren’t the only one who can lend a helping hand.
Delete Image
Align Left
Align Center
Align Right
Align Left
Align Center
Delete Heading