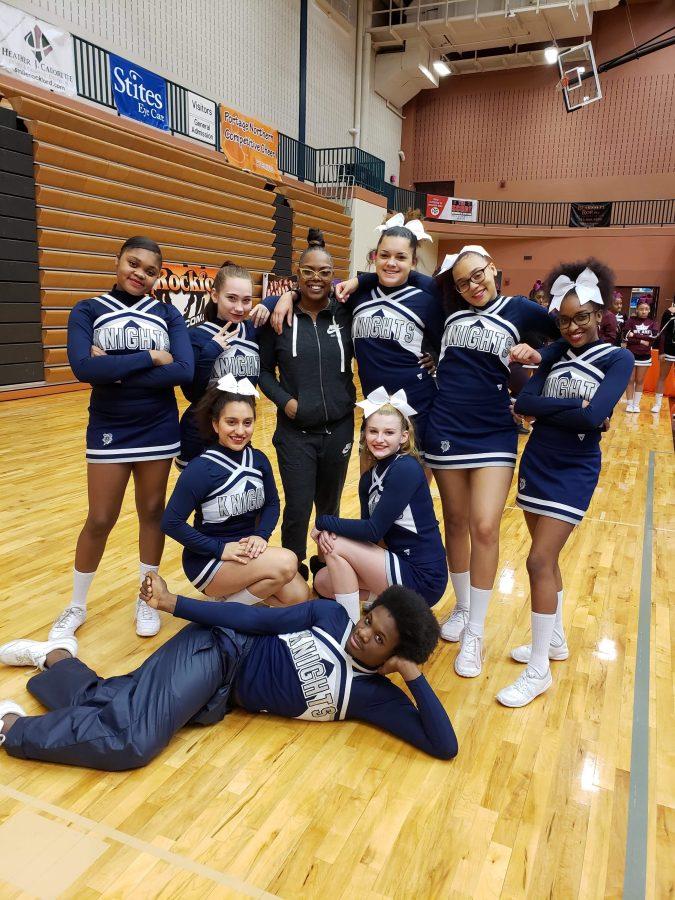 “L-N-H-S! LET’S GO! L-N-H-S!” yells the Loy Norrix cheer team at Kalamazoo Central High School while preparing to take the mat for round one of the cheer SMAC tournament.

It’s their first tournament of the season, and the new competitive cheer team finally gets to show off what they’ve been practicing. After finishing the round the team runs off the mat to their new coach, Chelsey Carpenter.

Over the past few years, coach Sheree Lillard had been coaching both sideline cheer, which involves cheering for basketball games, and competitive cheer which is when cheer teams come together and compete against each other. This year she decided to only coach sideline and let a new coach take over for the competitive season.

Chelsey Carpenter, originally born in Muskegon, MI, grew up in Grand Rapids and cheered for 4 years at Grand Rapids Christian High School.  After graduating she did two years of collegiate cheer at Ferris State University. She began working in Kalamazoo at WMU in April 2017 as the assistant director of the MI GEAR UP Program which is a grant-funded program designed to target local high schools and provide tools and resources for first-generation and low-income students to go to college.

At the time she was still living in Grand Rapids and commuted roughly 50 miles for the first 4 to 5 months. Carpenter moved to Kalamazoo by August 2017.

“I’m always looking for opportunities to impact my community. I decided that Kalamazoo is where I’m going to be for a few years, so I looked around for some ways to get more involved in the community. The position [of cheer coach at Loy Norrix] was posted on the KPS website.” said Carpenter. “I decided to be a cheer coach because I have a lot of mentorship to offer. My motto with everything I do is, ‘Be the person you needed when you were younger.’ I can relate to the everyday struggles of being a teenage girl on top of the demands of being a scholar and an athlete.”

When asked what Carpenter’s goal for the team was she replied, “My goal for the team is for us to build character skill first and cheer skills second.” Carpenter continued, “I want the girls to be able to transfer everything learned during the season into their real life after graduation. My goal for the team is to win their internal and personal battles before a cheer competition. Discipline, Integrity, and Humility are the pillars to becoming a productive young woman in society.”

She wants to be able to be a mentor to the cheerleaders and connect with them on a level that her own coaches never did.

“I like her,” said senior Kiara Weatherall. “She is really supportive and she is dedicated to helping us. We are a lot better and even though our team is smaller than usual, she is really putting effort into getting us where we need to be.”

Carpenter’s favorite part of the season is attending the cheer competitions. When she’s not coaching or working at Western she spends her free time time relaxing with her fiancé, watching Netflix movies and finishing puzzles or coloring books.

Carpenter acknowledges that in the past seasons the cheer team didn’t make it to districts but wants to end the season “feeling like winners” and hopefully go to districts.

“I’m proud of the team for remaining committed to our dream. It’s extremely difficult to group strangers together to reach a common goal. I’m amazed at how helpful and encouraging they have become towards each other. They  have worked hard to begin changing the reputation of the program to get the respect from school peers and administration that they deserve,” said Carpenter. “I feel that cheer is the perfect sport to learn the power of your mind over your body. It’s just as much physical as it is emotional. The sport itself teaches you have to have confident and because in tune with who you really are.”

Round 1 focuses on skills like splits jumps and single person skills.

Round 2 focuses on team unity. Cheerleaders are judged on unified jumps splits, rolls and other skills.

Round 3 is a very free round. Cheerleaders mainly stunt and do advanced tumbling in this round. They are judged based on how advanced their stunts and tumbling are.