Old School vs. New School: Two Generations Show How Music Makes Them One In The Same 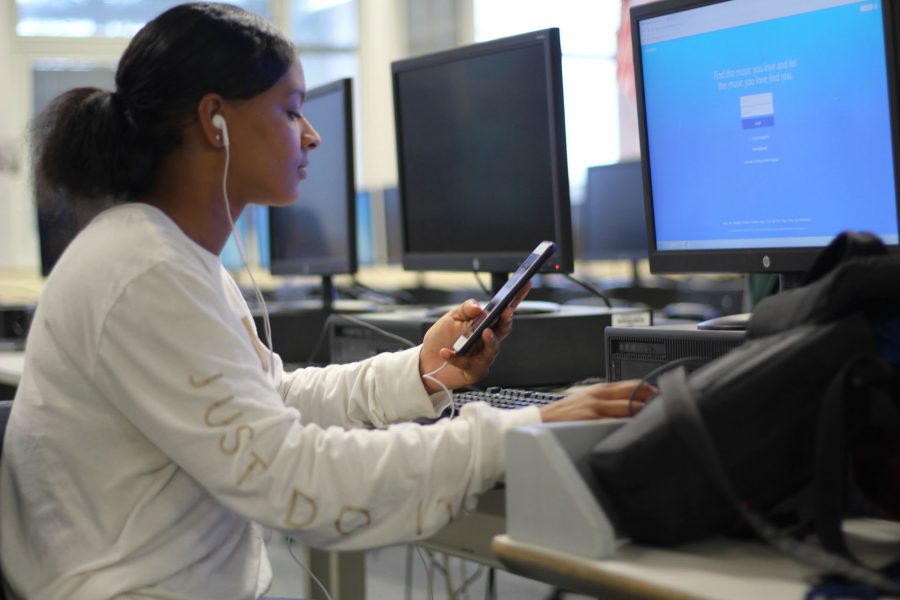 Music has always been emotion evoking. It can help you get through seemingly any situation or mood, either through expressing your emotions or coping. Everyone has go-to songs that they listen to during good or bad times.
Musical taste has evolved, for better or for worse. Loy Norrix biology teacher Valerie Long and senior Imani Berry were asked to reflect on the music they listened to throughout their teenage years. Newer music has become more “vulgar and explicit” according to Long.
“The biggest shift in music is taboo is no longer taboo,” Long said, referring to newer songs’ use of sexuality explicit language and anger toward the world.
Berry said, “Older music was like storytelling, now it’s more just talking,” agreeing with the popular criticism of modern music being nonsense and unmeaningful.
Long represents the teenage generation of the 80’s. During that decade she describes her music as roller skating solid gold, electric boogaloo and pop-locking music. During her teenage years music was loving, fun, and about enjoying life.
“In general the attitude of our [graduating] class was getting along, like a big happy family,” said Long
According to “Top 40 Weekly” the top artists from that time were Michael Jackson, Madonna, Prince, and U2, the top song being “Physical” by Olivia Newton-John, one of Long’s favorite songs. Long lists more of her favorites being:
“Black and White” by Michael Jackson
“I Don’t Care About Anything But Being With You” Smokey Robinson
“Endless Love” Lionel Richie and Diana Ross
“Summer Summer Time” Will Smith
Berry represents the current high school generation, the 2000’s babies. She describes modern music with four words: love, drugs, money, and sex.
One thing that remains the same with music is its ability to draw in listeners with lyrics they can relate to. Berry said, ”Most people believe it’s [lyrics] true, and take what they hear to heart. A lot of people try to do what they [the artists] say.”
Overall she believes modern music is “hype” or “turnt,” while she did note that there are certain artists that cater to a different mood. She mentioned the artist Juicewrld, saying, “It’s a lot of sad stuff, depressing or about heartbreak” when asked about the emergence of “Emo Rap.”
Emo rap or sad rap is is a genre that mixes hip-hop beats with lyricism typically found in emo music and includes artist like Lil Uzi Vert, XXXTentacion, and Trippie Redd.
According to Billboard 100, the top artists recently in 2019 are: Ariana Grande, Post Malone, BTS, and Cardi B. The top song is “I Like It” by Cardi B.
Berry listed a few of her own favorite songs as well:
“India pt.2” by Lil Durk
“Wine Pan You” by Doja Cat
“Mixed Personalities” by YMN Nelly and Kanye West
Music has changed, just as things do over time. The 80’s were a time where young people lived for the disco and flare out pants were a must. The 2000’s are now a time where having headphones and a fire playlist have been added to the survival list.
Even here at Norrix, just looking down the hall it’s hard to find a kid without headphones in. These two generations were able to show us that no matter how much music changes it will always be around and spreading its influence to us and how we feel listening to our favorite songs.
So turn up your airpods, and brush the dust off your boombox and keep listening