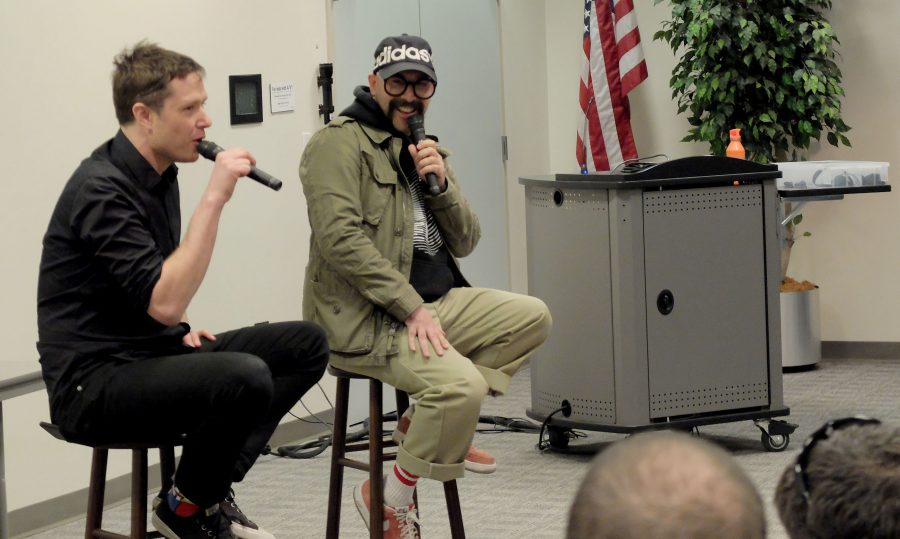 Damian Kulash (left) and Tim Nordwind (right) of OK Go speak at meet & greet at the Kalamazoo Public Library. When Nordwind was growing up in Kalamazoo, his mother served as the president of KPL's Friends Board of Directors.

A flyer is plastered onto the bulletin by the office. It shows four men in bright attire, tangled up in colorful yarn. This poster advertises that their tour is coming to town, but it isn’t the first time for one of them.

“My friends, who I played in a band with in high school, someone’s English class was doing, it wasn’t a talent show, but it was like everyone was supposed to come show the class something that they did creatively, and so we decided to figure out if we could set up in the auditorium and play a three-song set basically. I remember thinking then ‘this may be the first and last time I ever play on a stage in Kalamazoo with a band,’ so it’s funny to think about that and hear there’s a flyer for our show in Loy Norrix,” said LN alumnus Tim Nordwind.

Tim Nordwind graduated from Loy Norrix in 1994. Since then, he’s moved cities, gone to school for playwriting, and of course, helped form the popular indie-rock band, OK Go. After meeting him at Interlochen Arts Camp in northern Michigan, Nordwind quickly became friends with Damian Kulash, who would end up being a lifelong friend and bandmate. Together they formed OK Go in 1998.

“We became best friends and bonded over lots of stuff, but mostly music, which was funny because neither of us were there for music. He was there for visual arts and I was there for theater, but we were super into Run DMC and the Beastie Boys and also ‘Les Miserables,’ the musical, and all this weird stuff.” Nordwind continued, “I don’t know many people period who are still in contact with their friends from the age of 11, and the fact that I’m not just in contact with them, but I started a band with Damian and Dan [Konopka] and Andy [Ross], and how it’s somehow gone on to be known is really a pipe-dream come true.”

OK Go has gone on to create a current total of 4 albums, releasing their most recent, “Hungry Ghosts,” in 2014.
The band is known for producing meticulously crafted music videos to accompany their music where they do things like dance in-sync on treadmills, set up a giant Rube Goldberg machine or jump around in a zero-gravity airplane.

“One of the reasons we haven’t put out music in so long is because we’ve made videos for not every song on the record, but a good number of songs on the record and every one of those videos typically takes three to six months or something like that, so we make records at a slower rate than most bands,” said Nordwind.

Before Nordwind entered the world of music, he was a boy with artistic prospects growing up in a town in southwest Michigan. He lived in Kalamazoo for the first 18 years of his life. He attended the Gagie School up to 4th grade then subsequently went to Parkwood-Upjohn, South Junior High (now called Maple Street Magnet School), and finally Loy Norrix High School.

At the age of 10, Nordwind started to pursue an interest which would pave the path to where he is today: acting.

“My brother did a lot of theater in high school and he babysat me, and so when he was in the musicals I had to sit through his rehearsals. He went to Hackett. So for several years in the springtime, I would sit in the theater and watch my brother rehearse, and when I watched him do theater it made me realize I want to do that, like I really want to do that, so I started enrolling and doing shows at the Kalamazoo Junior Civic Theatre.” explained Nordwind.

During his freshman year at Norrix, Nordwind was a part of the Drama Club, helping to put on productions like “Androcles and the Lion” and “A Midsummer Night’s Dream.” Over his remaining three years, he played leading roles in “Anything Goes,” “Guys and Dolls,” and “Oklahoma.”
He came to appreciate the diversity that Norrix has to offer. This was very helpful to him when he moved to Chicago, living in a very diverse environment.

“On a social level it was an incredibly diverse student body that I went to school with, and I didn’t realize how unique of a situation that was until I got to college, and in talking to fellow classmates and stuff like that I realized they did not come from as diverse a student body as we did, and that in and of itself was maybe the best education I got in high school,” said Nordwind, “It’s a special thing that should not be taken for granted.”

Nordwind’s interest in acting in musicals along with his exposure to music through his siblings encouraged him to learn guitar and play in bands while in high school. He was a part of the D.I.Y. punk scene that was taking place in Kalamazoo at the time.

“I was always going to shows in illegal warehouses and basements of probably some student from Western Michigan’s flophouse basically. All throughout high school, my friends would go and see this punk music that would either be local or come through Kalamazoo.” Nordwind continued, “It’s kind of what inspired us to go start OK Go and later on it’s what inspired us to start making videos online and without the permission of our label, and just start doing stuff ourselves.”

As well as acting and punk, Nordwind is heavily influenced by comedy. The comedy filmmaker Christopher Guest, who is famous for films such as “Waiting for Guffman” and “This is Spinal Tap,” has had a large impact on Nordwind and the band’s creative process.

“The way that he [Christopher Guest] makes films is by sort of creating a sandbox for really talented people to come and play in, so usually there’s not a full script, there’s a blueprint of a story and he gives the actors the basics of what’s supposed to happen in the scene and they improvise and shoot until they get stuff they like.” explained Nordwind. “That happens to be very similar to the way that we make our music videos, where it’s like we create a sort of sandbox of an idea for us to then get in and play with until we’ve come up with enough ideas that we can sew them together to make a video out of.”

His bandmates bring their own material to the table. They all share their love for Christopher Guest, but their individual inspirations are very different.

“Damian is very inspired by science and technology and visual arts, and Andy, who’s our guitarist, is a computer programmer and makes a lot of his own apps and things like that and used to be super into robotics and that kind of stuff, and our drummer Dan is super into sound production and things like that,” said Nordwind, “so we usually all come at whatever creative project we’re working on from slightly different perspectives, but I think that at the end of the day it’s the combination of those things and the push and pull of those things that make what we do work.”

As of late, the band members have channeled their interests and the educational properties of their videos into a new charity called OK Go Sandbox. In collaboration with Dr. AnnMarie Thomas from the University of St. Thomas, they have started this new charity with the purpose of using OK Go’s art for the purpose of education. Their most recent project is “Art in Space,” a science competition for middle school and high school students where the winner has their own science experiment sent into space aboard a Blue Origin rocket.

“For the last several years, teachers and parents have come up to us and said, ‘We use your music videos to teach our students and kids about the basic principles of physics or math or just creativity and music in general.’ We started asking ‘what can we do, how can we help’ and we came up with this idea to make more focused educational videos for tools and teachers that they can use in their classrooms,” explained Nordwind.

Even though OK Go has been in full force for over 20 years, this is their first real concert in Kalamazoo. They decided their Live Video Tour, where they perform live to their iconic videos, would be the perfect time to play their first major show in town.

“I remember that on our first record coming to play Miller Auditorium for some sort of festival that was happening at Western Michigan University, but our set was 20 minutes long. We played at like one in the afternoon, and then I think we played in Chicago that night or something like that.  I’m going to go ahead and say this is the first real proper show that OK Go has done,” Nordwind continued. “I’m pretty excited to go play at the State Theater because that’s where I saw the Pixies. I saw the Dead Milkmen there, I saw the Replacements there, you know, I saw all these super influential bands so it’s kind of special to be able to come back and play on that same stage.”

Tim Nordwind returned to Kalamazoo on April 28, 2019, for the first time in 25 years. He has not forgotten his history here and how the town shaped him into who he is today. Thinking back to his time as a student at Loy Norrix struggling to find his place in the world, he remembers the difficulty of being a striving artist.

“Make sure you really really love what you’re doing because it’s a challenging career path and it’s hard to make a living at. You have to really love it. Basically, if you’re scared by doing anything else in the world but making music, making art and stuff like that, then I think you’re ready to go try it out, but just make sure that you love to do it because it’s a hard path. It’s a very very hard path but also can be an extremely rewarding one,” said Nordwind, “I guess in some ways I thought it would happen and in some ways, I thought it wouldn’t. It’s definitely a dream to hear that there’s a flyer for our show in the hallways of Loy Norrix. I know that was a dream of my 15-year-old self.”