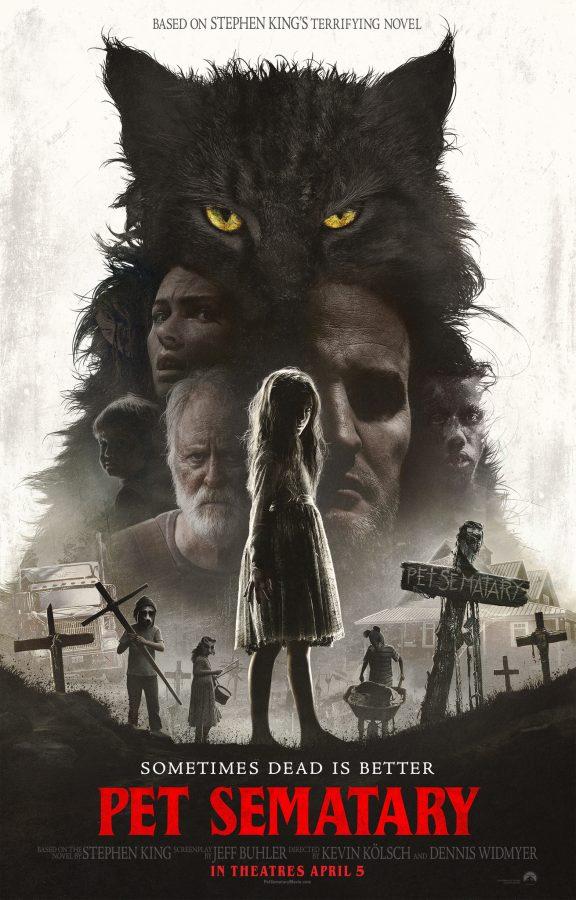 “Pet Sematary” has to be one of the slowest, most anticlimactic movies I have ever watched. The movie “Pet Sematary” came out on April 5, 2019. Rotten Tomatoes gave the movie a 58% and followed with only 41% of the audience liking the film.

The movie opens on a family moving to their new country home. Shortly thereafter, Ellie, the daughter, goes to explore the new property and she meets an old man named Jud. Ellie asks Jud about the ‘Pet Sematary’ in their backyard. On Halloween, Jud finds the family cat on the side of the road after it has been hit by a truck. Jud takes the cat beyond the ‘Pet Sematary’ and buries the cat there.

The next day Ellie’s parents plan to tell her that the cat ran away, but the cat inexplicably reappears, now as an evil feline. The reincarnated cat scratches Ellie, so her father, Louis, takes the cat and drops it off miles away so it can’t hurt anyone else. However, the cat returns again and Ellie sees it during her birthday party. She and her brother run into the middle of the road to pet the cat, unaware of the semi truck speeding down the road. The semi driver sees her brother, but ends up hitting Ellie.

After Ellie’s funeral, her father takes her out of her grave and brings her to the cat’s burial site. Later that night Ellie becomes alive again, but she is not the same, she has also turned evil. Ellie breaks into Jud’s house and kills him. Then her mom comes back from Brooklyn and Ellie kills her too, then drags her to the burial site where she can be revived. Eventually, Ellie’s dad finds and tries to kill her to end all of the madness, but when he is finally about to kill her, he gets stabbed by his reincarnated evil wife.

The acting in the movie was decent, the effects were good as well, I give the director, Kevin Kolsch credit, for that. He did not do a good job embodying the book.

The only thing I have to complain about is the plot of the movie In my opinion, the movie, “Pet Sematary,” was not as well-directed as I hoped it would be. The movie lacked features to make the film exciting. It was repetitive and cliche. Every move was easy to predict, for example, I predicted that the bus was going to swerve and hit Ellie or that her father was going to send her to the burial spot behind the ‘Pet Sematary.’

It was quite obvious that Ellie was going to turn evil because it happened to the cat. When Ellie’s mom comes back, Ellie doesn’t like it because she wants it to just be her and her dad, so Ellie definitely wants to kill her. Ellie drags her mother to the burial spot everyone knows what is going to happen she will come back to life and became evil.

The cliche ending of the movie upset me the most because when Ellie’s dad attempts to finally get rid of the evil within his daughter,  his reincarnated wife stabs him and he comes back as an evil-incarnate himself.

Overall, I agree with the Rotten Tomatoes rating, the movie did not live up to the hype I was expecting. I did enjoy the beginning of the movie right after the cat turns evil up until Ellie dies and gets revived from the special burial site.