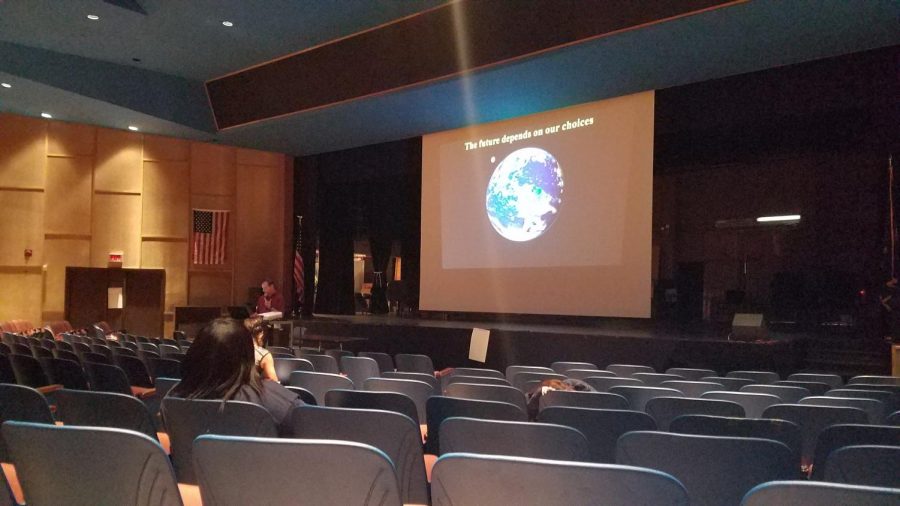 Two days before a paramount International Day of Peace summit was hosted by the United Nations in New York, students and staff at Loy Norrix attended their own presentation. Except at this assembly the presenters weren’t diplomats, and the lectures weren’t on global politics.

The object of the mock-United Nations rally narrowed in on a subject just as sobering. An unavoidable planetary ecological meltdown. Professors David Kowe and Paul Clements of Western Michigan University used the opportunity that afternoon to shed light on the urgency of climate change and what forms of global planning—if any—can halt the march of imminent horticultural holocaust.

Students listened attentively as Kowe spoke about the effects that future climate change will have on the development of the Great Lakes region. On the stage a visual presentation powerfully illustrated the abysmal destruction life will face in the future, granted we continue on doing nothing.

“We definitely need to focus more on recycling, and waste management efforts. Things that will help the environment in general,” said Acurea Brown, a student attending the lecture.

The longer we are unwilling to deviate from the business as usual doctrine, the less time we have to slow down potentially existential climate threats. The problem stems from rapid human progress in the past two centuries. With the onset of rapid industrialization, urbanization and population growth the weight of our presence on Earth strains the foundation of ecology itself. The consensus in the scientific community regarding the origin of climate change is a nearly unanimous agreement that human activities contribute the most.

“Scientific evidence for warming of the atmosphere is indisputable,” the Intergovernmental Panel on climate change stated in a public announcement. Still, skeptics, public figures, and politicians debate the origin of the issue.

“Birch, Aspen, Balsam, White Cedar, White Pine and Sugar Maple will all perish by 2100,” Kowe said. Going on to explain what moderate and severe biome changes are, Kowe pointed to a map of the world where almost all the land was highlighted in red and various shades of orange demonstrating the areas most vulnerable to damage.

Normally, gradual climate change would take place on Earth over periods of millions of years. The fact that we can observe changes in the environment over a period of less than a century is incredibly alarming. And incredibly dangerous for the tedious balance of biodiversity the natural world is built on.

Additionally Kowe pointed out that over the course of the next century, the Earth’s biosphere may destabilize so rapidly that a majority of all life perishes. In painful irony, it might be that the economic miracle of mass manufacturing will prove to be one of humanity’s most formidable hurdles if what Kowe says is correct.

“Over seventy percent of the surface of the earth will experience at least a moderate biome change in the next century,” Kowe continued, “That’s like having a desert that never existed before suddenly appear in Kalamazoo.” The most devastating effects of global climate change will begin to manifest in the later part of the 21st century if the world continues to do nothing.

Kowe maintained overall that the most important step we can take against climate change is to socialize about the problem with peers and relatives. And that the more people are exposed to the issue in their daily lives, the harder it becomes to ignore.

A major warning sign of potential disaster, according to Kowe, is that our atmosphere is rapidly approaching a carbon content higher than even the hottest periods of geological history.

Human activities that convert solid carbon reserves into gaseous emissions must be slowed down or stopped. Kowe explained that the best way to make sure that happens would be to follow the provisions outlined in the Paris Accord, an international climate agreement between the world’s leading industrial powers to limit their carbon footprint.

After decades of deliberation between world leader, and warnings from the scientific community, the experiment with global climate cooperation was finally launched in 2014. However, as of today, the fate of the Paris Accord remains ambiguous. Many member nations aren’t legally obligated to participate in checks from UN representatives to confirm that standards are being respected. Furthermore, Donald Trump’s decree to disconnect the United States from the treaty does away with the economic incentive for most other nations to participate, as well as doing harm to the amiable international environment necessary for truly effective cooperation.

“I think that if students start to get more involved with elections, and volunteering change can happen on a larger scale,” said Linda Mah, a Communication Specialist with Kalamazoo Public Schools, when asked how she believes young people can add their input to the global climate change conversation.

Steering  the conversation into the political realm of climate change, David Kowe shed light on the policies world leaders have on climate change. Recapping some of his colleagues’ main points and highlighting some of the most concerning data. Paul Clements gave his insight.

“A key point of his being that individuals and organizations that benefit from climate change tend to benefit when awareness of climate change is suppressed,” said Clements.

For example, an oil processing company might use industrial processing methods that produce egregious amounts of carbon. A large portion of the scientific community would concur that industries producing larger amounts of greenhouse gases are the most responsible for climate change. The company would, therefore, lose potential business and moral superiority if the views of the scientific community were to go unchallenged. So many large carbon-producing companies pay their own research panels to conduct experimentation, but they only release the results that benefit that corporation.

“Politicians whose ideologies contradict with global cooperation will be antagonistic towards global warming reform,” Clements said. he continued stressing the devastating results of climate change denial by top government officials and brought the fight to the students by explaining what courses of action young people can take to bring climate change reform to their communities.

“Kalamazoo County, as of today, has a Climate Action plan drafted. But right now, it isn’t being used,” explained Clements. He suggested that young people who are to inherit and protect the Earth for future generations should “Demand as voters that Kalamazoo enacts the draft Climate Action Plan.”

The two colleagues stood on stage and took questions from students ranging from how we can reduce our carbon footprint to what ways young people can involve themselves in the fight. The presenters then stepped off the stage, their somber message and imagery lingering in the auditorium like a fog. The crowd broke into small groups, taking notes and contending with what they had learned.