Clara Moss on growing up with two moms 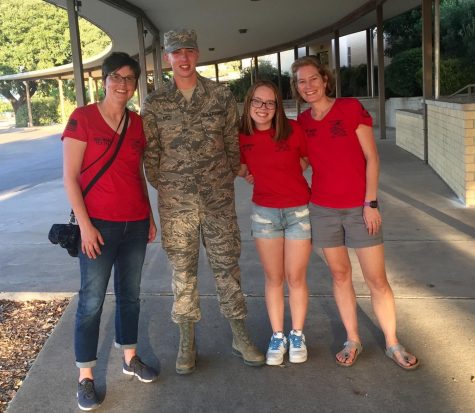 “My family is just like any other one, just with two moms,” freshman Clara Moss said.

Her moms’ names are Anna and Kim. An interesting fact about the family is that Anna gave birth to Clara and Kim birthed Isaac, Clara’s older brother who is an 18 year old graduate from Loy Norrix. However, Clara and her brother have the same father who will remain unnamed due to sensitivity issues.

Clara and her brother’s father is a close family friend who was asked to help create the two as a sperm donor. Even though they have both met their father, they rarely contact him because of the family that Anna and Kim have created for them.

Anna is from Wisconsin and is a legal house attorney who works in Battle Creek and is on the Kalamazoo Public Library Board. Anna loves to read and write but not as much she loves to run. Anna joins “Girls on the Run” for the 5k every year and runs a marathon twice a year.

On the other hand, Clara’s other mom Kim is funny, creative and a do-it- yourself person. She is from Washington State. Kim has built bookshelves, tables and chairs. She teaches special education at Maple Street Magnet School for the Arts. Kim loves to go on adventures like canoeing, and on the side, she is a sports photographer. Kim and Anna met in Mississippi while traveling for teaching. They have have been happily married for 21 years.

“I wouldn’t trade moms for a dad any day,” said Moss.

She thinks that the two moms she has is all she needs to succeed.

When you have two moms in a household, there might be one that you can trust more but with Moss that’s not the case.

“It’s like having two best friends just there for you,” said Moss

If you had two moms would you feel more of a connection to your birth mom or would you be like Moss and love both of them equally?

“Having two moms doesn’t have an impact on my life, it’s just like having a mom and a dad, two parents to talk to and at the end of the day,” said Moss.”

Moss loves the closeness of the family and all of the trips they take together but really wishes she knew more about her family history on both sides, Moss grew up with two moms all her life so not having a dad didn’t really affect her that much.

When it comes to two moms there are highs and lows. Two highs Moss has is the trips they take together and how close they all are. The low to having two moms is not knowing a lot of her historic family. Moss know’s that part of her mom Anna’s family is Scottish. One of Kim’s great-great uncles invented a port where ships would pass through back in the day

“I don’t want any homophobic friends. When I sense a homophobic person, I automatically distance myself from that type of negativity. I accept people no matter what. That doesn’t mean I’m going to grow up and automatically want to date a girl, it just means that it doesn’t matter your gender, race or sexuality is, you should be able to express yourself  in public, your home, or your place of business,” said Moss.