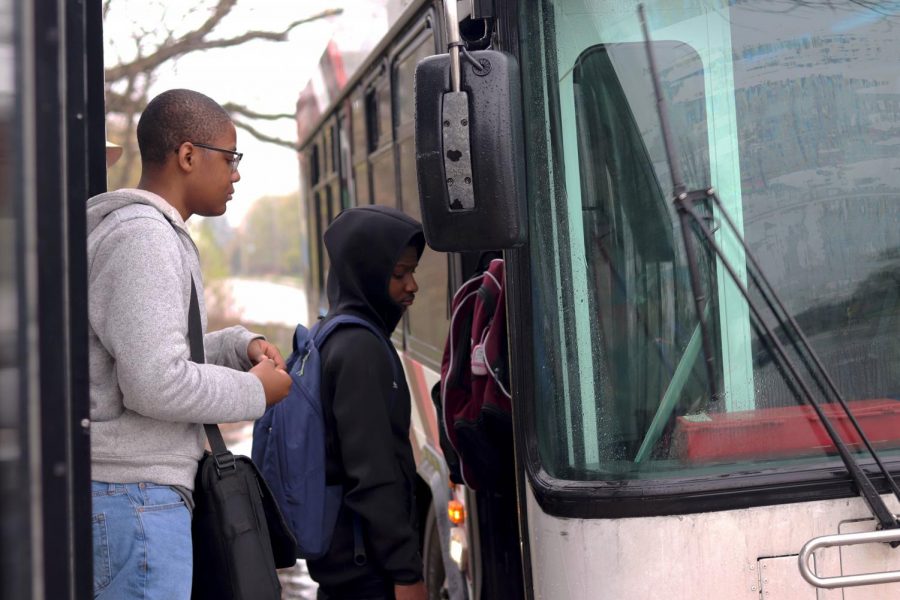 Loy Norrix students, Tayvon Davis and Jeremiah Nelson, board the bus at the 2:45 stop to head home. With the new Metro policy the students will no longer be allowed to ride for free between 2 to 4 p.m.

For the 2019-2020 school year, the Kalamazoo Public School high school students have been given a bus pass for the Kalamazoo Metro Transit, as a partnership with the Kalamazoo Youth Mobility Program. The students use these youth mobility passes, which are free, to get around between jobs, home and school. The bus passes have been a huge success, as students have packed some buses to their max capacity.

“The transit has given about 75,000 rides [since the beginning of the school year] to students through the program” according to mLive.

As of November 19th, the Metro Policy has been changed from its original policy.  This is a big upset to the students who have been informed about the change.

“Especially between those afternoon hours, the buses are at capacity and paying riders are not able to ride the bus,” [said] Steve Brown [in an interview with mLive], coordinator for the Foundation for Excellence continued. “It does not make business sense to run extra buses for one pick-up.”

While this is most likely to be true, the program is heavily funded.

Another reason the Metro decided to not allow the passes to be active during these hours, is some of the students are being very disrespectful and are fighting on the bus or in the transit center.

Kathy Schultz from Metro Transit said, “So it [the change] mostly had to do with student behavior. We have had students who normally ride the school bus, taking the bus downtown and then loitering at the transfer center.”

However, to deal with these issues, Metro Transit has created a new type of bus pass which Schultz said should be available in February. New opt-in forms have also been created that students have to get signed by a parent or guardian to be able to ride the city bus with the new pass. The students will get a temporary tamper- proof sticker on the back of their ID, until the new passes are available.

This new rule has affected many students in very different ways.

Loy Norrix junior Matthew Gonzales said, “As the weather gets colder, relying on transportation like this becomes a bigger issue. I respect Kalamazoo Metro’s right to charge us, but I had assumed for the foreseeable future I would have transportation to work when needed, and so did my parents. [Now] it will be about 20 dollars out of every paycheck.”

A lot of KPS students use the buses to get home from school or get to work. Now students need to find other transportation methods or start paying the $1.50 to ride during the hours of 2 p.m. and 4 p.m.

This change is only in effect until February. According to Loy Norrix Principal Christopher Aguinaga, “After February, they [Metro Transit] are going to revisit the 2-4 window, and our hope is that they will be able to reopen that time frame.”

For the students that are staying after school for club meetings, tutoring, or other reasons, and need bus transportation, Aguinaga said, “If you have a detention or staying for tutoring. almost all of those programs end at 3:30. Metro has told me the next bus [Duke] comes at 3:45 or 3:50 which is about a 20 minute wait… Metro has said they won’t shut that bus off, meaning it is close enough to 4 o’clock they will let students ride that bus.”