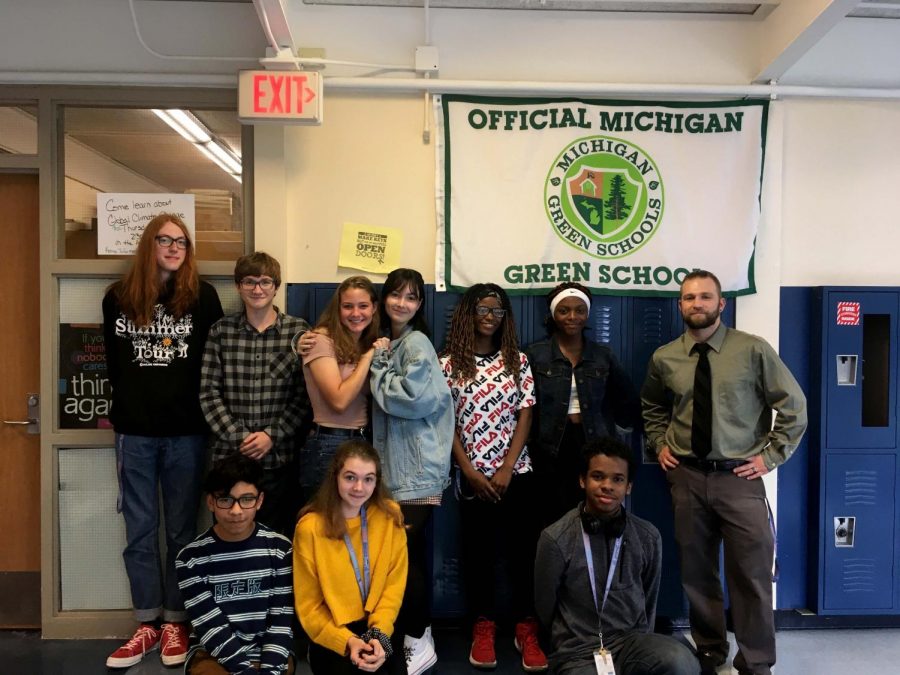 “Green School Club is a bunch of people that do good, just to do good,” said Loy Norrix freshman Brian Treadwell. Treadwell feels that everyone in the club is very positive and helpful. “It’s nice to care about the world you’re living in. If you care about the environment and want to put in the effort, you should join the club,” he adds.

Every Thursday, students gather in room B14 to inform each other and hopefully the whole school about environmental issues. In order to become a green school, schools have to have two activities from the four categories. The four categories are reduce/reuse/recycle, energy, environmental protection, and miscellaneous.  Green schools are groups of students that aim to make schools more environmentally sustainable, and we have one you can join at Loy Norrix!

“Green School is all about trying to make the school more aware,” said David. He also said walking more, driving less and eating less meat are good ways to be more sustainable. “I very rarely eat meat. I am plant based: I don’t eat animal products, including dairy,” he added. According to Industrial Agriculture Pollution 101 from the website Natural Resources Defense Council, 3.3 million deaths a year are attributed to the particles we inhale from livestock pollution. Animal waste emits around 400 harmful gases into the air. Among those gasses are ammonia. Eighty percent of all ammonia emissions in the U.S. come from animal waste, according to 5 Facts About Animal Agriculture and Air Pollution That You Just Can’t Argue With from the website One Green Planet.

Last year the Green School Club did projects such as animal habitation and adoption. They also put out all of the recycling bins throughout the hallways of Loy Norrix. The project for this school year is cleaning up the A-Wing courtyard, which includes potting plants that attract monarch butterflies. The A-wing used to be a monarch way station, which is a resting and feeding area for monarch butterflies, and the Green School wants to maintain that.

The Green School Club also has great tips to be more sustainable. According to 12 Ways to Live More Sustainably from the website Biological Diversity, going plastic-free is one of the biggest ways to reduce waste. Forty percent of the ocean’s surface is covered in plastic, hurting the habitats of many lives.

“If you do eat meat, please be more conscious about who you are buying your meat from, and support local businesses,” sophomore Telice Celmente continued. “I’ve been interested in helping the environment and doing what I can to stop climate change. One club won’t cause that much change, but we can influence the whole school to be more environmentally conscious.”

“There are so many people that waste so much stuff,” said sophomore Sophie Talo. Sophie tries to cut down on waste, reduce the use of plastic bottles or bags, use tupperware, metal water bottles, and “duhh” metal straws. Sophie said that Mr. David is really supportive and feels that everyone in the club wants to save the planet.