What Role Models Mean To Us: Freshman looks up to her middle school art teacher 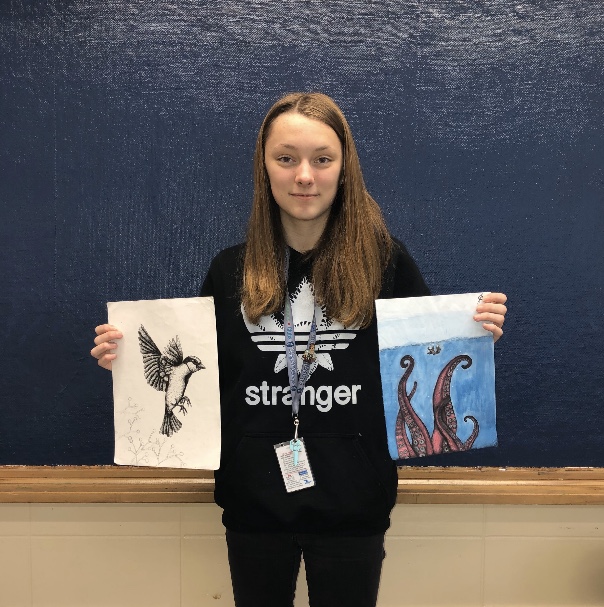 Holverstott poses with two of her original pieces. The one on the left was recently featured in an art show.

“I look up to her, she helped me through some rough times,” said Loy Norrix freshman Lucy Holverstott when talking about her 6th grade art teacher from Maple Street Magnet School for the Arts, Gayle James.

Everyone has someone they look up to. Whether it’s a person they’re close with or someone they idolize. Role models inspire us in ways that influence how we act and how successful we are in the world.

“She helped me discover skills I never knew I had,” said Holverstott.

Role models motivate us and show us what we are capable of. They not only introduce us to new skills, but they make us better our current skills. Lucy’s art has improved greatly since having James as an art teacher; she’s already had her art displayed in 3 art shows!

When Lucy was in 8th grade, she wanted to be in a high school art class called Basic Design which was offered in her middle school. At first, she was not chosen because Mrs. James had noticed Lucy was distracted at many times during her former art classes. Basic Design is a very fast-paced class, and Mrs. James was worried she wouldn’t be able to keep up. Lucy has ADD (Attention Deficit Disorder), causing her to become easily distracted and not focus in class.

According to  “Art Therapy for ADHD,” written by Diana Rodriguez, “Art therapy for ADHD offers the opportunity to communicate in a way that’s easier than talking for many people who have a hard time organizing their thoughts.”

When Lucy did not see Basic Design on her schedule, she emailed Mrs. James. She told Mrs. James that she would work very hard and focus. She had been looking forward to this class and loved having her as an art teacher. Mrs. James was touched by the email and let Lucy join the class.

After Lucy joined Basic Design, she learned many different techniques for art and how to become a better artist. Now because of Mrs James, she wants to be an art teacher.

“When I become an art teacher, I’ll help people who are struggling just like Mrs. James helped me,” Lucy said.