President Trump faces impeachment because of the Articles of Impeachment 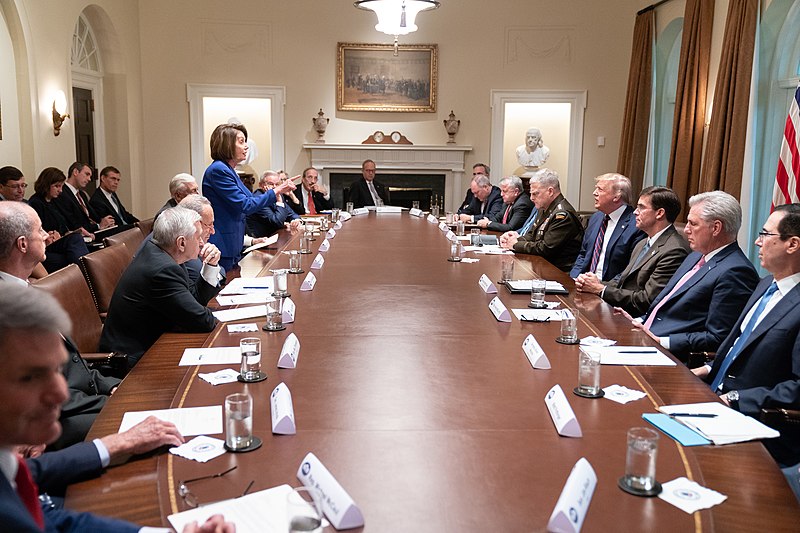 Speaker of the House Nancy Pelosi scolds President Trump during a meeting with Congressional Leadership.

House Democrats have released articles of impeachment. The two articles are specifically accusing President Trump of abuse of power and obstruction of Congress.

The abuse of power charge is a result of President Trump’s phone call with Ukraine, “…soliciting the government of Ukraine to publicly announce investigations that would benefit his reelection, harm the election prospects of a political opponent, and influence the 2020 United State Presidential election to his advantage,” cited from The House of Representatives Resolution Impeaching Donald John Trump, President of the United States, for high crimes and misdemeanors.

“In response, without lawful cause or excuse, President Trump directed Executive Branch agencies, offices, and officials not to comply with those subpoenas. President Trump thus interposed the powers of the Presidency against the lawful subpoenas of House of Representatives…” according to The House of Representatives Resolution Impeaching Donald John Trump, President of the United States, for high crimes and misdemeanors.

The vote for impeachment in the House committee took place on December 13, 2019. The committee has decided to bring it to full a house on Wednesday December 18, 2019.

Loy Norrix government teacher, Jay Peterson thinks that the articles of impeachment are justified along with the charges that are included.

“I feel they’re [the articles] justified and the charges that they are asking for. There’s definitely be obstruction of justice on behalf of the Trump administration, in refusal to provide evidence and witnesses for the house judiciary committee,” said Peterson.

It is likely that President Trump will be impeached in the house because it is currently controlled by Democrats, however, as Peterson explained, “My fear is that because the Senate is a narrow majority of republicans, that when this goes to the Senate it will be will go along party lines, that Republicans won’t find him guilty regardless of the evidence.”

This idea has also been predicted by many professional political analysts.

“I think it will be successful in the House and in a vote to send it to the Senate for a trial, but I don’t think that once it goes to the Senate, unless new info is provided. I don’t think, based on what I’ve heard and what I’ve read, that there will be enough evidence for the senate,” said Peterson.

If the president is not impeached in the Senate, which needs a 2/3rds majority vote, he will not be removed from office.

As of November 18th, 2019 President Trump was impeached by the House.