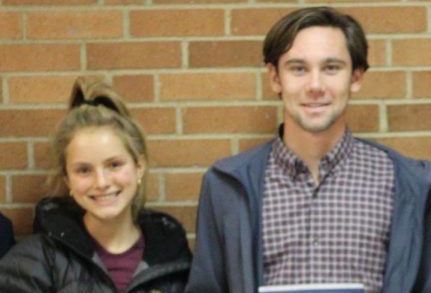 Three members of Tea Club discuss the meeting while seeing what kind of tea is available to them. They are excited to see who shows up, and what conversations will be had.

“My dad wanted me to try it [long-distance running] out. I was pretty good naturally, and I liked the people I met,” said Meyers.

Meyers has steadily improved his 5K time every year in his time running cross country.

“I don’t do a lot of stuff other than school and sports. I feel like it [cross country] is my place,” said Meyers.

Meyers has run cross country for LNHS all four years of his high school career. His 5K personal record (PR) is 15 minutes and 40 seconds. He ran in the state division 1 race his sophomore, junior, and senior years. His senior year, he placed 21st out of 245 runners.

Schnell, on the other hand, has only ran cross country for LNHS her senior year. Her 5K PR is 18 minutes and 57 seconds. She ran at the state division 1 conference Saturday, November 2, placing 50th out of 257 runners.

During her cross country season, Schnell was contacted by Boston University and Northeastern University. However, running in college is still an uncertainty for Schnell.

“Depends how I do in track, but I would like to continue running in college,” said Schnell.

Schnell’s family members run regularly, and she grew up running 5K races with her mom. Schnell used to play soccer in the spring season but now participates in track and field instead.

Meyers also participates in track and field in the spring season. Beyond track, Meyers was also on the tennis team for all but his senior year as well as running indoor track in the winter. Meyers also attends a running camp in Colorado in the summer.

“I quit tennis last winter because I wanted to focus on running, and I knew to run in college, you need to run pretty well in junior track season,” said Meyers.

Meyers committed to running for the University of Michigan on October 28, 2019. Schnell has not committed to any one college yet.