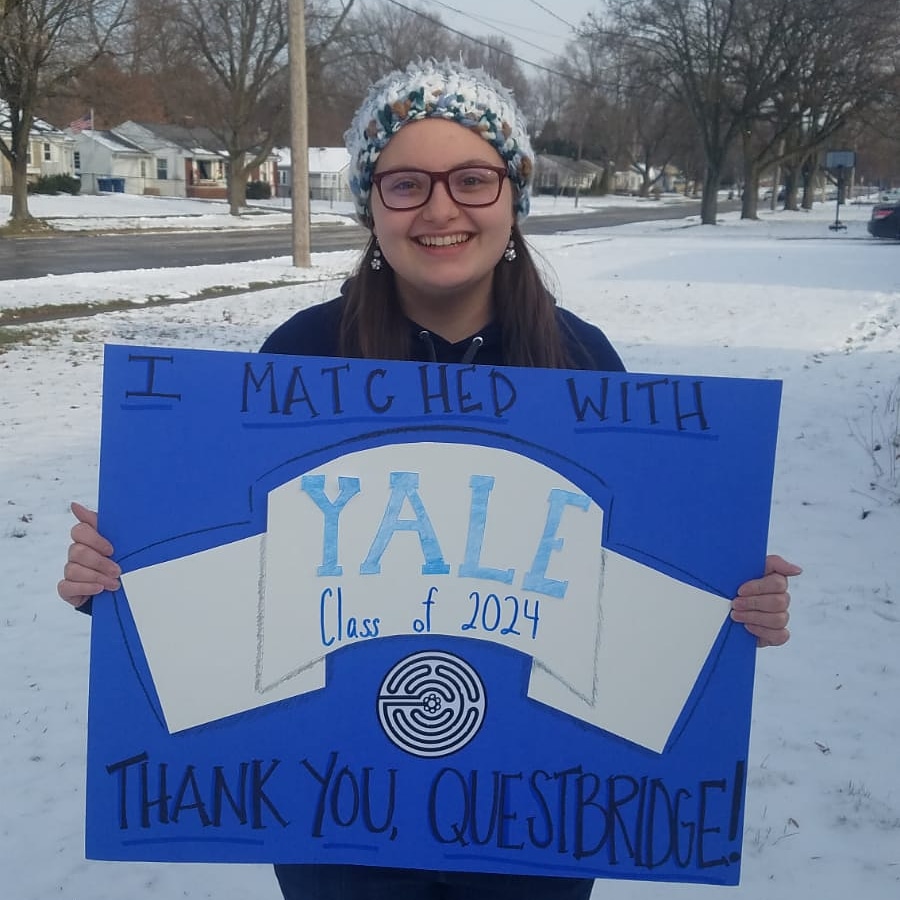 Senior Lily Dorstewitz poses with her Questbridge poster after learning of her acceptance to Yale.

“It just doesn’t feel real, it hasn’t started to set in yet,” said senior Lily Dorstewitz.

Dorstewitz found out in early December that she has been accepted into Yale University, one of the world’s most prestigious universities.

According to the Yale University website, last year, Yale accepted over 2 thousand students out of almost 37 thousand applicants, for an acceptance rate of 5.9%, one of the nation’s lowest. While getting accepted to Yale is an astounding feat itself, Dorstewitz was also informed that she received a full scholarship, through the Questbridge program.

The Questbrige program ensures students from low-income backgrounds have equal opportunity to pursue elite higher education that is otherwise too expensive. The program matches students to forty different prestigious colleges across the country through a rigorous selection process. Dorstewitz selected Princeton and Yale as her top two schools, and she found out early this past December that she had been matched to Yale.

“We were all so excited, my family just couldn’t believe it,” said Dorstewitz.

The college admissions process is a stressful time for many high schoolers. Often it is difficult to tell exactly what a college or university is looking for, especially when so many students have similar grades and test scores. Admission at prestigious schools has become increasingly difficult for students who in the past may have had a good chance of getting accepted to a certain school.  Students often look for that extra edge that will put them over the top in the pool of applicants. For Dorstewitz, she believes attending KAMSC and swimming for LN has really helped her chances of admission.

“I think my leadership role within the swim team and through 84 steps [The KAMSC student run newspaper] helped show my initiative and ability to lead,” said Dorstewitz.

While Yale is about a 14 hour trip from Kalamazoo, Dorstewitz is excited for the opportunity to live in a completely new place.

“I visited and I really fell in love with the campus, and I’m so excited to go next year,” said Dorstewitz.

Dorstewitz plans to study mechanical engineering at Yale. However, despite her intended major, she looks forward to taking many different classes and exploring her various interests.

“One of the things I’m most excited for at Yale is the opportunity to explore and see what I like. I’m not restricted to just my major,” said Dorstewitz.

Dorstewitz’s accomplishment proves a fine example that hard work and challenging yourself ultimately pays off.