Spider-Man’s journey through the ages: Students reminisce about the past and predict his future 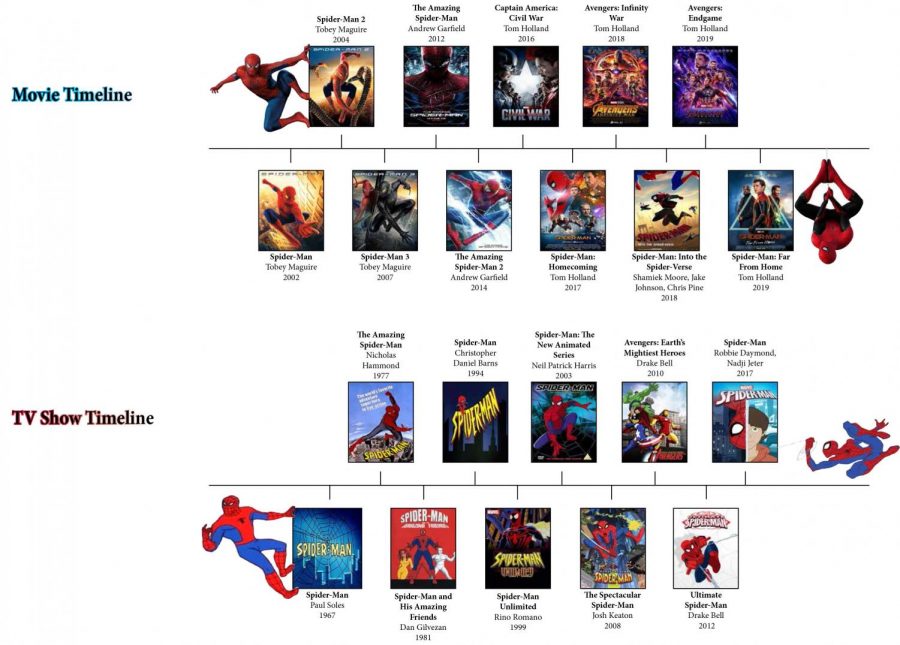 A complete timeline of Spider-Man's journey through television and cinema.

Since 1967, the iconic hero Spider-Man has been swinging from comics to movies and back again. His first cinematic debut in 2002 set the groundwork for many more versions and stories of Peter Parker to come to life, and he has become a beloved character during his journey through the generations.

“It all came from my father; back when he was a kid he used to love Spider-Man,” said Loy Norrix junior Brendon Rice, known for his role as the Kalamazoo Spider-Man. “He had that love of Spider-Man as a child and passed it on to me. The movie in 2002 was my very first movie.”

Besides an interesting story, the spider-themed hero’s wit and one liners made for an entertaining new character for the younger generation of Marvel fans back in his comic debut in 1962.

“I like his personality, and I like how he’s different from other superheroes,” said Loy Norrix junior and fellow Spider-Man fanatic, Jostrau Bangura. “Like he’s younger, but he’s achieved so much. He’s relatable, in a way.”

Tobey Maguire played Peter Parker in “Spider-Man” (2002), and then twice after that in the sequel and third installment (2004 and 2007). There have been many more following in his footsteps, among those being Tom Holland and Andrew Garfield, recreating the classic story in a thousand different ways.

“I would say Tobey Maguire [is my favorite actor], but you’re gonna call me nostalgic. Andrew Garfield’s not the best, in my perspective, but I’d say Tom Holland is the most decent one so far,” said Rice. “I like how he interprets his character, ‘cause at least he’s not like in his 30s, he’s a lot younger. I think when I saw him first in “Civil War,” and that was when he first arrived. That was around the end of my middle school years and I was off my feet, like everyone was talking about it.”

Bangura agrees with him, saying, “I think Tom Holland’s is the best. I’ve enjoyed his the most. It’s just because of him as an actor. I feel like he fits the Peter Parker role the best.”

Tom Holland’s reiteration of Spider-Man will have one more movie released in the “Homecoming” series, set to debut in July of 2021. After the shocking after–credit scene in “Far From Home” that Marvel is famous for, many fans await the conclusion to his trilogy and even have some thoughts on what it may contain.

“I would say since they sorted out the whole Disney and Sony rivalry together, I’d say probably in Spider-Man 3, this time they might have Venom around,” said Rice.

Venom has been a continual appearance in nearly every reinstallment of Spider-Man so far.

“I think what’s probably going to happen is that everybody is most likely not going to believe it,” said Bangura, in reference to Peter Parker’s identity being revealed in the after credit scene. “I feel like if they were going to expose his identity enough for people to believe it, they’d have to physically see him pull off the mask. I don’t think they’ll believe Mysterio at all.”

Whatever direction Marvel chooses to take with Spider-Man, Loy Norrix students eagerly await the arrival of the final installment of his journey in the MCU.