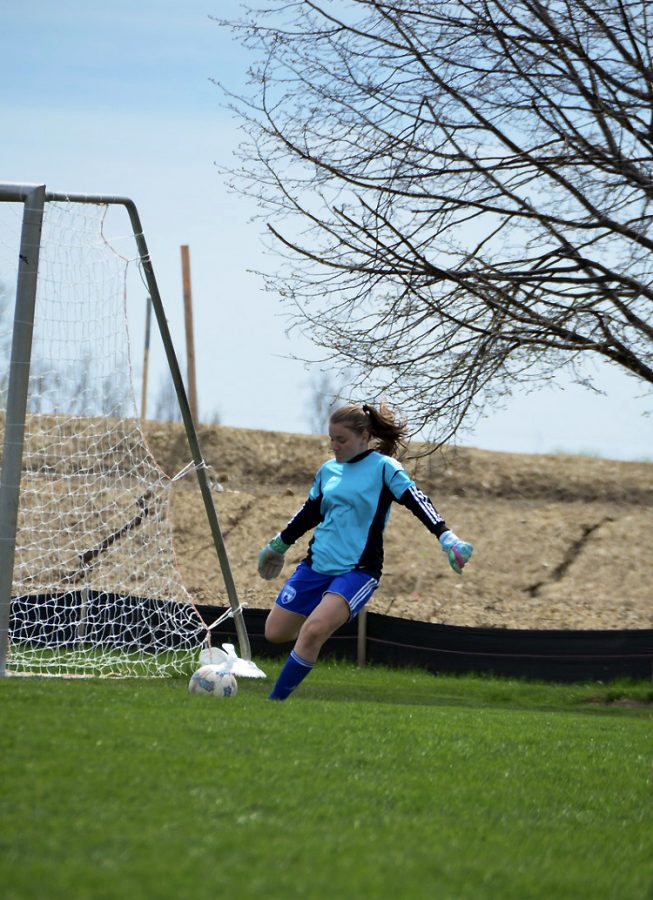 Goalie, Hannah Locke, kicks the soccer ball out from the net. Hannah played a big role during a big away-match.

Sports: a way to socialize and make friends, an outlet for stress teenagers across the country are feeling, and a way to work exercise into your schedule. However, sports aren’t all fun and games, they become more demanding as student athletes face numerous challenges presented by their hobby.

Hannah Locke, a freshman at Loy Norrix, is a student athlete and has first-hand experience with the challenges and triumphs of being an athlete through playing soccer. “Over 3 million of America’s youth ages 10-19 play the sport,” according to Rapids Youth Soccer.

“I started out with AYSO [American Youth Soccer Organization] in the first grade,” Hannah said, “like pretty much every kid in Michigan.”

Now, Locke plays goalie for Midwest United and plans on trying out for the Loy Norrix High School team this March. One of the biggest challenges Locke faces being a goalie is acquiring injuries as a result of the sport.

“I’ve lost a lot of games, but I think it’s injuries that have affected me the most. I had a hip injury two seasons ago and I’ve had two concussions,” Locke explained. She isn’t alone in this struggle.

According to Stanford Children’s Health, “In the U.S., about 30 million children and teens participate in some form of organized sports, and there are more than 3.5 million injuries each year, which causes some loss of time in participation experienced by the players.”

“I rely on soccer to benefit my mood,” Locke said, “and when I can’t play it puts me in a worse mood. I don’t know if this is a good or bad thing but I’m very emotionally reliant on the sport.”

It  takes practice and dedication to become a proper team member. “Depending on how far you want to go it requires a lot of commitment,” Locke explained, “so you have to genuinely like the sport if you want to improve at it.”

According to author Jen Pashley of Skyd Magazine, high school and college athletes typically practice 10-12 hours in a week, but hours can range from 6 all the way to 24.

However, soccer can also be an incredibly beneficial sport for young athletes. One of the most prevailing benefits of playing a sport is the social interaction one gains from being on a team.

Locke’s favorite part of being on a team is the bonds she makes with her teammates.

“I love the connections I make and the social and leadership skills I develop,” Locke continued, “I usually have a lot of social anxiety and talking with people I don’t know can be scary sometimes but having the connection of soccer between me and someone else helps me a lot with that.”

When asked if playing sports has ever changed her opinion on something, Locke said, “I think it has definitely helped me look at people and sports differently, it’s made me more interested in athletics, and I don’t know it’s just changed how I look at things.”