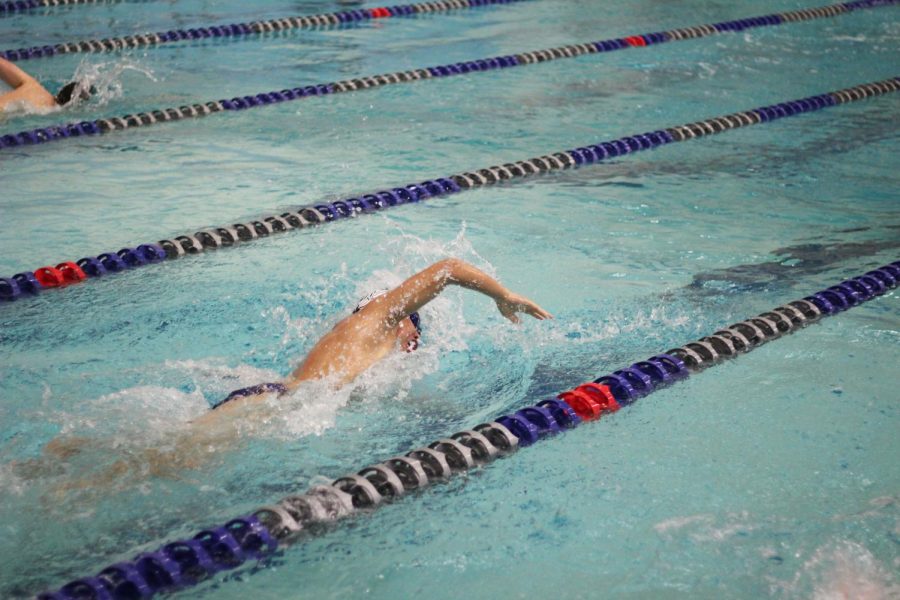 Freshman Keng Wee swims the 500 freestyle in a meet against Coldwater. Wee got 4th place in his heat and overall

The Loy Norrix men’s swim and dive team competed at their home pool on February 6, 2020. The Knight’s defeated Coldwater, 127-55. This meet was special because after the conclusion of diving, head coach Cameron Beauregard gave a speech to appreciate all the parents of the swimmers and divers.

This was the second meet won by the Loy Norrix men’s swimming and diving team this season, making their new record 2-5. As they approach the end of season, with only 2 dual meets left, the team’s goal is to place 5th at the SMAC championship meet.

The meet was won by the boys stepping up individually in order to benefit the whole team. Sophomore Evan Teal won both of his individual events, the 200 freestyle and the 100 breaststroke.

Sophomore Roman Wassink won both of his individual events, the 50 freestyle and the 100 backstroke. Although winning against Coldwater was a great achievement, there is still work to be done before the end of their season. “Knowing that I’m so close to the conference meet tells me I have to start working hard. Peak week is coming up. The week after that is taper, then the week after that I’ll be at my prime and ready for the conference meet,” sophomore Roman Wassink said.

Senior Drew Dougherty won both of his individual events, the 200 Individual medley and the 100 butterfly.  “Winning my events felt good, but it really showed I still have time to drop. Being so close to conference is bittersweet because I’m so ready to be done grinding everyday and in pain, but I don’t want my season to end being my last,” said senior Drew Dougherty.

The Knights went on to compete against Kalamazoo Central at 6:00pm at KC’s pool on February 13th, 2020, and will advance to the SMAC championship meet on February 28th.