Freshman deals with grief in different stages of life 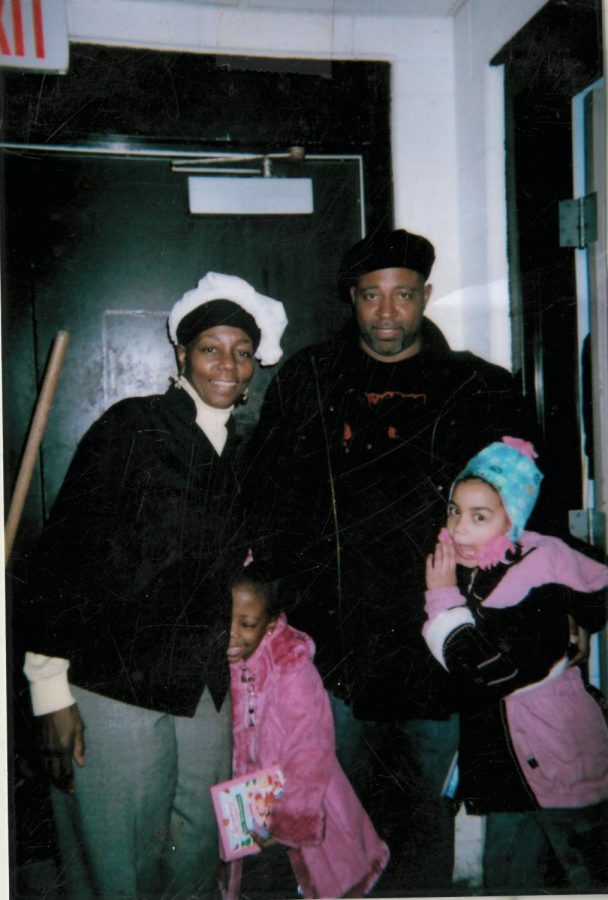 Left to right front row, Yvonne Robinson's grandmother Brenda Hendricks and her father Rodney Robinson. Left to right bottom row, her cousin Issys Robinson, and Yvonne Robinson. Yvonne and her family are pictured before serving hundreds of homeless people at a mission located in Detroit, Michigan. This photo was taken about a month before Yvonne's father, Rodney Robinson passed.

“Not having to go to daddy daughter dances, that was the weird part. All the little girls would ask me, ‘Why aren’t you going?’ Well I don’t have a dad to go with, so I can’t go,” Loy Norrix freshman Yvonne Robinson said.

Yvonne Robinson lost her dad at age 7, and she’s now 14. Yvonne was living in Detroit, Michigan at the time, and she was visiting her grandmother when she heard the news of her father’s passing. Yvonne’s father was 42 when he passed away.

Yvonne had to figure out how to cope after her father’s death since it occured when she was only seven years old.

“It’s not really hard to cope now, but back then I mostly would just read other people’s stories, how they cope. Reading helped me escape, and go to a different world,” Yvonne said.

According to 10 Benefits of Reading: Why You Should Read Everyday, by Catherine Winter, reading can reduce stress and promote tranquility within.

Yvonne remembers going to the park and eating out with her father.

“He was a very lovable person, though most people didn’t see him out to be. He was very funny, like that’s where I get my sense of humor from. He was very kind and willing to help, even though he didn’t have much himself,” Yvonne said.

According to 5 Important Childhood Memories For Your Little Ones, retaining positive memories from childhood can help to develop personality and prepare children for important parts of life such as love, autonomy, and sociablility.

Yvonne felt forced to grow up when her father passed.

“I think everybody had those kiddish mindsets and realizing that death existed changed my childhood mentality. I was forced to grow up at a young age. You have to face the reality of losing a parent,” Yvonne said.

When Yvonne’s father passed, she looked to her faith in God.

“I remember always crying at night and asking God, ‘Why is this happening to me?’ and why couldn’t He spare life,” said Yvonne.

When she was younger, Yvonne remembers feeling hurt when seeing other people with full and happy families. She was left with only her mom, and facing reality was difficult.

“When I first noticed that other people had a happy family and I didn’t, it hurt me. It made me realize that I only had myself and my mom. It wasn’t all butterflies and rainbows, like I had seen it out to be,” Yvonne continued, “and still I don’t think it’s fair.”

Now, Yvonne has gone through the hardest parts of the grieving process; however, she still has moments where she misses him.

“It’s hard, especially seeing my mom on her own and not having the support that my father had. I think that if he was still here, I would be a more happy person,” said Yvonne.

In the future, Yvonne looks forward to telling her potential grandchildren about their grandparents.

Yvonne has an annual day of mourning for her father that also happens to be her mother’s birthday.

“What’s crazy is that my dad passed on my mom’s birthday, so I do celebrate her birthday, but also it’s a day of mourning for me,” said Yvonne. “I usually take time out of my day to sit down and remember him.”