Sonic the Hedgehog speeds onto the big screen 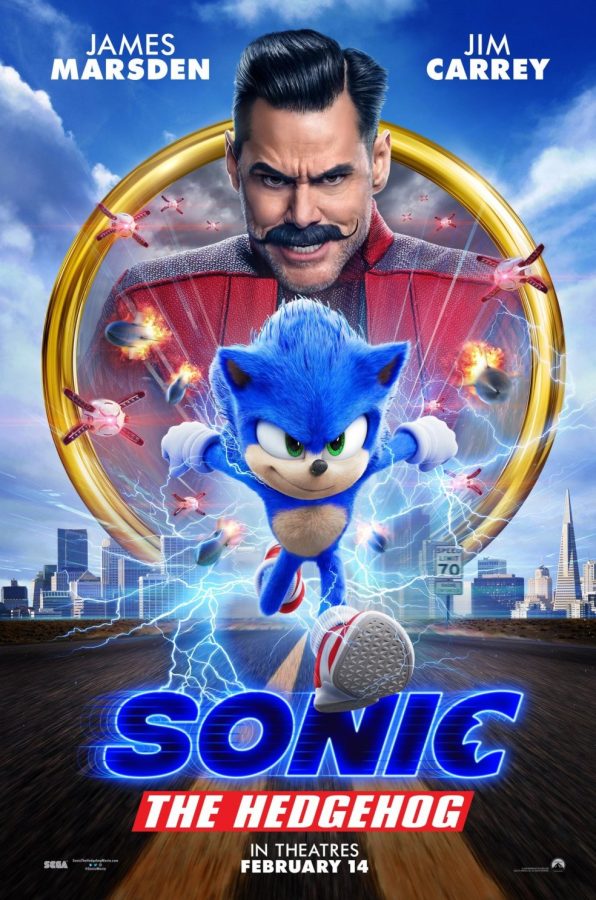 ATTENTION!! THIS ARTICLE CONTAINS MAJOR SPOILERS FOR “SONIC THE HEDGEHOG”!!

“Sonic The Hedgehog” exploded in theaters after it’s release on February 14, already having made over $200 million around the world since the opening weekend.

After the original trailer in April of 2019, the design of Sonic received severe backlash for it’s horrifying appearance. The studio announced on May 4 of the same year that Sonic would be redesigned, and the release of the film was postponed from November 15, 2019 to February 14 of this year.

The movie was immensely enjoyable. After growing up playing the Sonic game on my dad’s Sega Genesis, I had high expectations of how the movie would turn out, and they were tragically shot down when I saw the premiere of Sonic’s movie design in the first trailer. However, once the final trailer was rereleased with Sonic’s new and much improved design, I was over the moon excited to see this movie again.

The film was everything I wanted and more. Sonic was adorable, especially as a baby, and his lines were so in character that it didn’t feel like there was any difference from his energetic attitude in the games to the big screen.

Ben Schwartz, playing Sonic, did a fantastic job in his line delivery and voice acting, and his chemistry with James Marsden, playing Tom Wachowski, made for a fun and dynamic duo.

I was elated when I found out that Jim Carrey would play Dr. Robotnik, and he did not disappoint when I saw him in action. Jim Carrey was another callback to my childhood of watching movies that he starred in, like “The Grinch Who Stole Christmas,” and both of the “Ace Ventura: Pet Detective” films.

Besides the movie being absolutely hilarious, the way the characters were written felt really real. Tom’s reaction to finding a talking blue hedgehog in his shed was truly how an ordinary person would react to that sort of thing, and even through the craziness of having that talking blue hedgehog in his home, his deeper desire to help anyone in need pushed past the insane circumstances and lead him to accept helping Sonic escape Dr. Robotnik.

That was really good writing, and I appreciated Tom’s character choices and background that lead him to go against everything he knew to help this poor alien get home. Tom felt like a real person, and he did exactly what I would do in that situation, which helped immerse me in the story and really root for him throughout the rest of the movie.

I did have a few problems with the film. The movie seemed to be intentionally inconsistent with how fast Sonic could run when it was relevant to the plot. In the beginning scene, he was just too slow to make it to the portal before it closed, even though he could have done it with ease given what was shown earlier if his speed was consistent.

Another time later in the movie, it showed the whole world slowing to a near stop, while Sonic still moved like normal, giving the appearance that Sonic was so fast that time slowed down to him. I really enjoyed that scene actually, but it was watered down by the fact that the slowed time speed seemed only for comedic purposes. If Sonic is able to run faster than light, I would have preferred that his speed was consistent.

My other issue was that Sonic seemed to “die” via an explosion twice in the movie. I enjoy dramatic turning points, but it got predictable after the first explosion. However, the fact that Sonic went supernova from the brink of death after Tom adamantly said he was his friend was a very good scene, and possibly my favorite of the entire movie.

I was really fond of Sonic’s powers going haywire when he got emotional as well, and I loved that it was a consistent theme in the movie. It gave Sonic’s character depth, really showing that he was still a scared little kid that let his feelings get the better of him in certain situations despite his playful attitude.

The special effects of the movie just enhanced the experience of the final showdown against Dr. Robotnik.

Overall, I highly recommend the movie. It was a joy to watch and I would see it five times over and still enjoy it even more than the last time.