A 2,145 mile move: Kayle Trujillo and her family move from Los Angeles, California to Kalamazoo, Michigan 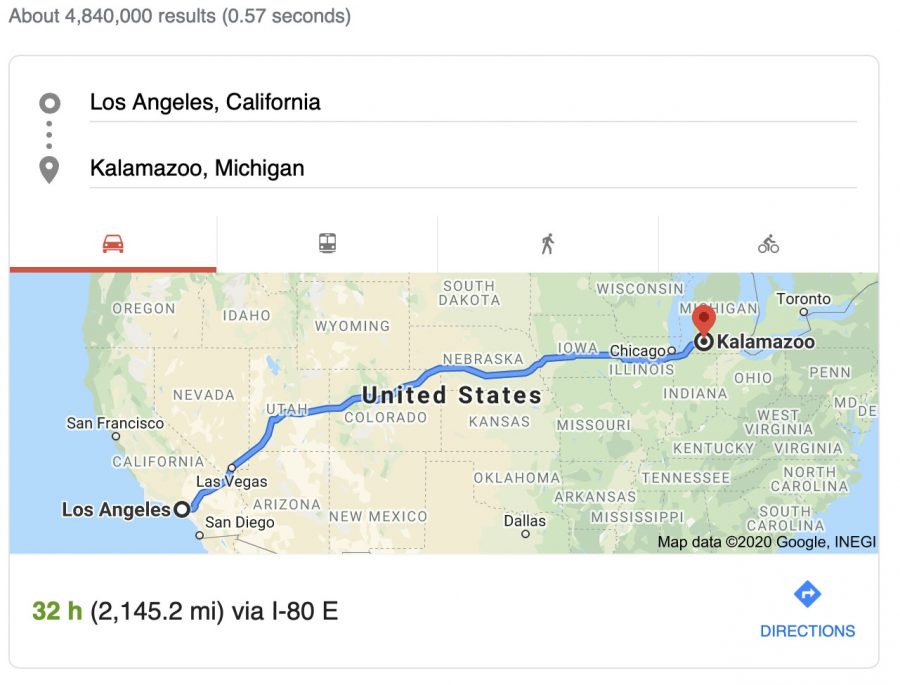 From four million hot, sweaty bodies in a 503 mile radius, down to only 75,807 freezing bodies in a 25.21 mile radius. To people who’ve lived in Kalamazoo most of their lives, 63 degrees is a day for short sleeves and a pair of shorts. To Kayle and her family, 63 degrees seems cold.

Kayle Trujillo lived in Los Angeles, California for 12 years with her family. But on August 11, 2017 they had a scene change. They decided to move to Kalamazoo, Michigan. Trujillo’s sister had a baby and finding work in LA was difficult. In 2015, when Trujillo’s sister’s baby was born, LA’s unemployment rate was about 6.6 and Kalamazoo’s was only 4.7, according to the LA Economy at a Glance, U.S. Bureau of Labor Statistics.

Because of this, Trujillo’s family figured the small city life would be a lot easier.

Kalamazoo is home to the Kalamazoo Promise. They offer free tuition to any college in Michigan, as long as the student attends a Kalamazoo Public School for all years of grade school. KPS also offers partially free tuition if students attend for a certain number of years. Education is very important in Kalamazoo. Also, the cost of living in Kalamazoo was on average, $601 cheaper than LA’s in 2015, according to U.S. Census Bureau Quick Facts: Kalamazoo Mi and LA California. Which made the decision to move to Kalamazoo seem like a good choice for Trujillo’s family.

In total, the move took only two weeks, but adjusting to life in this transition has taken much longer.

Living in California, Trujillo was able to be around her extended family more often. Having to see them less often has not been an easy transition.

“We were all together over there,” Trujillo said about the rest of her family. “I miss celebrating with them often.”

Some of Trujillo’s family members lived in Orange County, which is about a 50 minute drive from LA. She said she misses the tall buildings, mountains and having great places to go hiking. She said LA’s public transportation system made life a lot easier.

Trujillo attended a charter school when living in LA. She felt a lot of judgement there, and she feels she didn’t get that as much here. Her view on people has changed completely.

“I used to think people were very judgemental, but now I think people are more focused on themselves,” said Trujillo. The change from a small charter school to a big public school was a big difference.

She’s a freshman here at Loy Norrix, so high school was also a pretty big change. It’s a lot bigger and more chaotic. The hallways are crowded, people push, and the waft of body odor and Axe is quite overwhelming.

Trujillo doesn’t have the chance to visit LA much because of school. Additionally, communicating with her old friends is a little complicated. Kalamazoo is 3 hours ahead of LA, which can make communication difficult.

“It’s hard because we all grew up and went our own ways. It’s hard to say that I would know who they are now,” Trujillo continued. “I think the move was a good idea because I got to see a different side of school and now we get to meet new people. We get to learn more about different cities.”

Trujillo said she feels like the move was a good fit for her family. She hopes to go back to LA to visit sometime soon, but for right now she’s focusing on high school and seeing the rest of the world.