A life of music and dance: Junior performs on the Loy Norrix EFA dance team 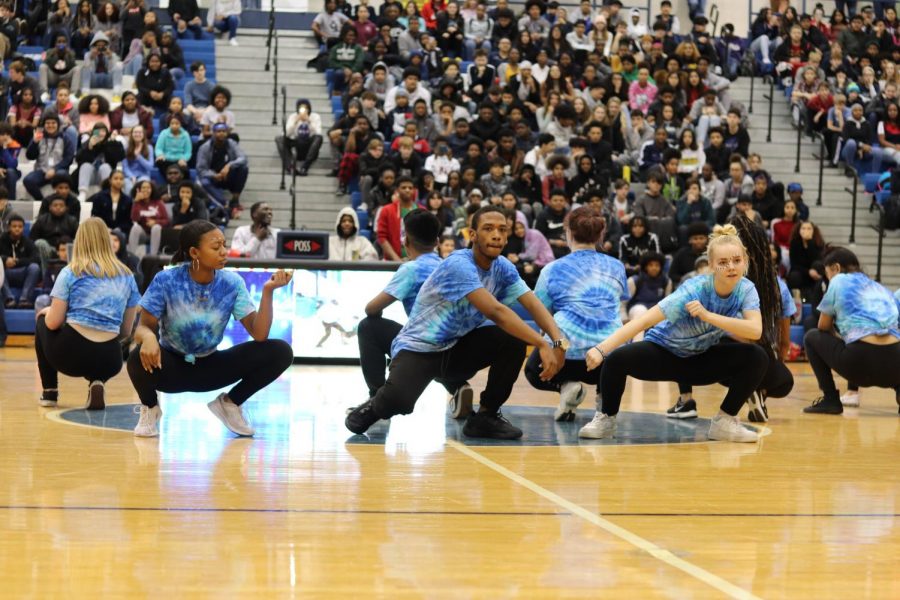 Damarion Johnson dances at the Winterfest Pep Assembly with the EFA dance troupe. The company will have three performances.

Junior Damarion Johnson runs across the Loy Norrix gymnasium at the pep rally on Friday, January 24. He waves his hands up and down and grabs the attention of students sitting in the blue and grey bleachers. The LN dance team is ready to start their song. Johnson stands center stage of the court, ready to perform.

“I don’t even think. I just go out there and perform,” Johnson said.

Damarion Johnson started dancing when he was six years old, and he is now a junior at Loy Norrix and is a member of the Education for the Arts (EFA) dance team offered at Loy Norrix. His focus is mostly on Hip Hop, but he has started dancing other types such as contemporary since he joined the dance EFA. Johnson’s favorite experience while dancing is a performance he gave at Bronson Park on June 15, 2019.

“From the start, from the jump, from the moment I was born, I’ve loved music,” Johnson said.

According to the article, “Hip hop is born at a birthday party in the Bronx,” Hip Hop originated in the Bronx, New York and later spread across the country. Hip Hop has a living culture behind it, that’s why you’ll see the dancers wear other clothes rather than the generic leggings, tights, and leotards that other dancers wear.

Johnson’s mother has had a big part in helping him start dancing. She would always remind  him how much he enjoyed music as a child, that he would always be watching different music videos. His love for music is what brought about his dance craze. He recalls watching and listening to Drake music videos frequently when he was younger, and even now he still enjoys listening and dancing to his art.

“The only thing that you liked doing [was] watching music videos,” Johnson recalls his mother telling him.

The most nerve-wracking thing about dance, in Johnson’s opinion, is constructive criticism. He recognizes himself as a perfectionist when it comes to dance, and it is hard for him to receive criticism. Johnson says it feels like he’s doing a routine correctly. He puts so much effort into making their dances perfect, but people are telling him that he needs to improve. It can be frustrating being told that what you are doing isn’t right, but it’s important to him to present the best dance routine he can.

Now, Johnson hopes to make a career out of dance by dancing in college and hopefully owning a dance studio later. He believes he will be nervous for the auditions to be on a college dance team because people are going to be judging him. It adds pressure to dance, unlike during performances where he is there to show what he can do and have a good time.

“We have at least three dances that we are performing and we put a lot of hard work into all of them, and taking the time to perfect these dances means a lot to me and the rest of the class,”  Johnson said. “When we go out there we put all the hard work in so we can represent the community and our school.”