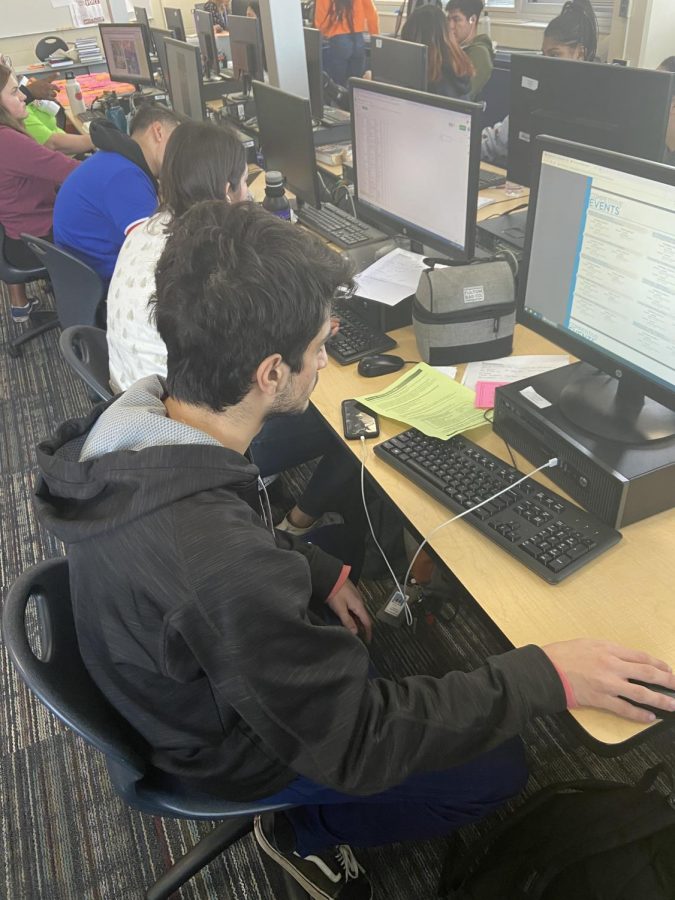 Senior Bakhty Higgins looks over the DECA schedule for his Sports Marketing event prior to the departure for the State Conference.

The Loy Norrix DECA, Distributive Education Clubs of America, team will be attending the State Career Development Conference in Detroit from March 5th-7th. The team will be taking a record 12 students to states this year who will compete in a wide variety of categories in the business field.

Students qualified for DECA based upon their performance in the district tournament in mid-December at KVCC. The state conference will take place over three days, with students participating in their respective event either Thursday or Friday, and then they will learn about future business opportunities that may open up to students in the future. Students who win their respective event will advance to the International Conference in Nashville, Tennessee.

“It’d be really cool to advance to Nationals and go to Nashville, but I’m happy to simply experience the business world and DECA has been an invaluable business experience,” said Higgins.

Higgins is planning on attending business school, and his involvement in DECA has been a confirmation of his potential interest in business.

In the various events, competitors will be scored based on their performance on a state-wide test and then scored on their essay or role play. Students had to take the test prior to the conference. For students involved in role plays, a varying level of preparation has occurred. Senior Breyana Wilson is involved in the Business Law and Ethics event, and her preparation has been different than other students.

“My event is a roleplay, so it’s different than just a test. You can prepare all you want, but at the end of the day it’s just about making sure you’re social and comfortable talking in front of the judges,” said Wilson.

Loy Norrix’s chapter is led by Business teacher Atiba Ward. Ward is proud of the work the chapter has put in to have an increased number of people qualifying for the state conference.. He credits the recruitment of new members as a primary reason for this year’s success.

“We had a lot of new kids this year. Our kids from last year helped bring in their friends and that has helped us be more successful as a club,” said Ward.