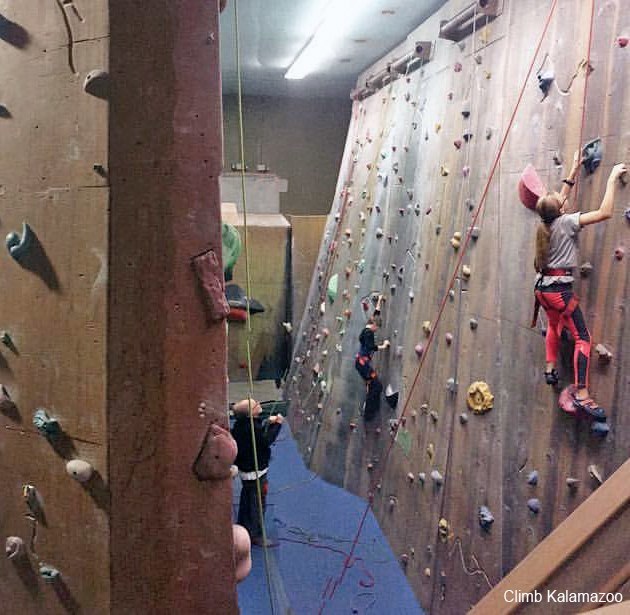 Climbers at Climb Kalamazoo tackle beginner to intermediate level walls. The facility offers a wide range of difficulties for every type of participant.

Here at Loy Norrix, it is widely known that all it takes to start a club is a student, an advisor and an idea. In the case of new Loy Norrix’s rock climbing club, it was health teacher Rich Labadie who got the idea started. As an advocate for physical health and avid rock climber himself, Labadie decided he wanted to create an opportunity for students to get involved with the sport.

The rock climbing club is only available to students during the winter months, when it is harder to stay active. All students are welcome to join the club during “climb nights” which occur every other week at Climb Kalamazoo, located on the mall downtown.

“I started it based on my own interests and comments I had received from multiple students expressing interest. So far, everyone seems to be enjoying it,” said Labadie.

As well as being challenging and fun, rock climbing has astounding physical and mental benefits. According to an article published by Active Weekender, rock climbing is a great way to relieve stress, test physical abilities, increase strength, and simply feel better overall.

Senior Zeke Link is a member of the club who has been rock climbing for three years and can attest to such benefits. “[Climbing] gives you better grip strength, and it’s a good sport to do if you want to get your mind off things,” said Link.

Carly Loken, also a senior, finds that rock climbing is a great way to condition and stay in shape for other sports. “I am a swimmer, so I’ve been rock climbing during the off season between school swim and club swim. Rock climbing works the little muscles that are harder to engage,” Loken said.

As spring approaches, the rock climbing club season is coming to a close, but based on the positive reactions from students, it is more than likely that it will continue at Loy Norrix in the future.