The Divided Methodist Church: The denomination set to split in two 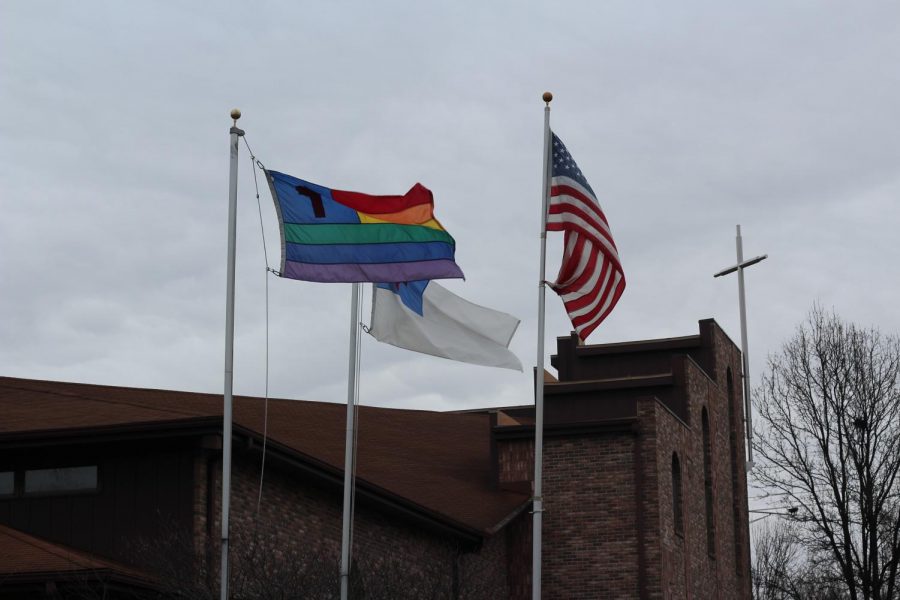 The Portage Chapel Hill United Methodist Church has made statements regarding their open stance on LGBTQ issues. They have chosen to fly a pride flag outside their building.

Following years of conflict over LGBTQ clergy and same-sex marriage, the world’s third largest denomination of Christianity has finally decided to split in two. The United Methodist Church is a worldwide Protestant denomination based in the United States that has been around since the late 1960s.

As stated in the “Book of Discipline of The United Methodist Church,” the church holds that “homosexual persons no less than heterosexual persons are individuals of sacred worth.” In other words, the church recognizes that all individuals, regardless of sexuality, are of worth to God. Nevertheless, it considers the “practice of homosexuality [to be] incompatible with Christian teaching,”

However, the world is changing quickly. Everyday, we are seeing old traditions challenged, ideals questioned and strides made toward acceptance. When it comes to the Methodist Church, only a portion of the congregation is on board.

The controversial decision to divide the church into two sectors, the one continuing to ban same-sex marriage becoming known as “traditionalist Methodist,” has had an impact on the life of Loy Norrix senior Lily Dorstewitz. Dorstewitz is a member of both the LGBTQ community and the United Methodist Church.

“I was pretty young [when the controversy began], so I didn’t think much of it,” Dorstewitz  said.

As she grew older, Dorstewitz began to understand the implications of the Methodist bias against LGBTQ people.

“Last year when it was coming to a peak, and I heard about the general conference, it just made me feel alienated,” Dorstewitz said. “Suddenly my worthiness and belonging was up for debate, not something you want to hear in church.”

Fortunately for Dorstewitz and her family, Portage Chapel Hill United Methodist Church, the parish they have been attending since she was 4, has chosen acceptance and will not be taking the traditional methodist route.

“We have a rainbow flag outside our church and a table at Kalamazoo Pride,” Dorstewitz  said. “We try to be pretty vocal about being supportive and having open minds, hearts and doors. It’s the global community that voted against it, not my church, so I never doubted I have a place in my own church.”

According to  “United Methodist Church Announces Plan to Split Over Same-Sex Marriage” from the New York Times, the decision will be made official based on a vote at the next global conference. The conference will take place in Minneapolis, Minnesota this May.

The split will be a monumental moment in the history of the denomination but one that has been deemed necessary for the survival of the church.