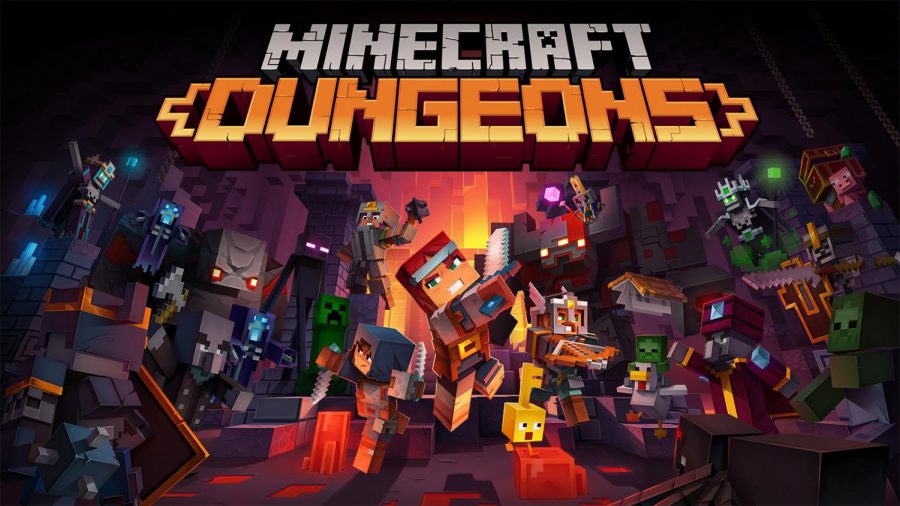 In 2009, a game which would define a generation was born.

Minecraft is a massively successful sandbox game made of blocks where the player can build infinitely complicated creations. Since 2009, Minecraft’s developers, Mojang Studios have sold over 200 million copies of Minecraft. This makes Minecraft the world’s best selling game.

Minecraft Dungeons is a new game from Mojang Studios that was released on May 26th for PC, Nintendo Switch, Xbox One and PS4.

Minecraft Dungeons is a dungeon crawler game where the player fights their way through levels of monsters and some puzzles all while getting better gear to fight the increasingly difficult levels. The game features online and local multiplayer, with up to 4 people adventuring at once.

With COVID-19 keeping much of the world stuck at home, it comes as no surprise that people are playing video games right now more than ever. In recent months, the Nintendo Switch has been continuously sold out wherever it gets restocked as people clamor for entertainment in the form of Nintendo’s flagship console.

Right now more than ever, people need a way to come together while still maintaining social distancing. Minecraft Dungeons is perfect for this.

The game takes elements from other mega-popular dungeons crawlers like Diablo, and majorly simplifies them. For one, it uses Minecraft’s signature blocky and pixelated art style making it much less violent or serious, as well as making it accessible to Minecraft’s huge fan base.

Dungeon crawlers are hard to get into as a more casual player, so using the Minecraft branding, Mojang Studios has been able to open up a whole new type of game for the average player to enjoy. There are also fewer items or complicated mechanics than other games like it.

Someone who has rarely played a video game could pick it up and have an absolute blast. However, I believe it still manages to strike a good balance at appealing to both less experienced and more experienced players. It does this by having two harder difficulty modes you can unlock after beating the game. Increasing the difficulty also allows you to improve and collect  more rare gear, so there is incentive for more hardcore players to challenge themselves.

I played this game whenever I had a chance for the first 3 days after it’s release. I’ve beaten the game three times, once on each difficulty level, and I have a lot of positive as well as negative things to say about Minecraft Dungeons.

To start off, the game has a really endearing story. It’s nothing you would get too into, but it will make you laugh as well as make you wonder what happens next. Also, the game strikes a great balance with its difficulty. Never did I really feel like there would be a spot you could get stuck on because it was too hard, however I also didn’t feel like the game was too easy.

The levels are also extremely atmospheric and beautiful. The design team did a wonderful job of taking the simple Minecraft aesthetic and enhancing it while still keeping it recognizable to old fans. The game is also incredibly satisfying to play and progress in. The sounds and animations are also crisp.

My biggest complaint with the game right now has to be it’s lack of content. Beating the game the first time would probably only take an experienced player about 6 hours. If you’re a completionist like me, it will probably take you just over 20 hours to beat the game at every level of difficulty and collect a good amount of the gear. I wish the game had more levels and also maybe some kind of endless mode or leaderboard challenge to shoot for.

Potentially, the feature could be something like Diablo 3’s Greater Rifts. It’s essentially just a level that is so difficult that it would challenge the best players with the highest level gear, with also a leaderboard to allow you to compare yourself to others. Something like this in Minecraft Dungeons would give the player a reason to continue playing after they’ve beaten all of the game’s main story modes. One light at the end of the tunnel for the fans, however, is that there are two more confirmed downloadable content expansions for the game, so new content is on the way.

Overall, the game is super fun, and it came at a much needed time.  I could see this game being played both by a family who sits down to play the local multiplayer for some Mario Kart style family fun, as well as online with yourself and a couple of friends who also have the game. The game is also incredibly fun just by yourself, so for only 20 dollars, it’s worth picking up.

Mojang Studios really hit the nail on the head with Minecraft Dungeons. I highly recommend the game to anyone who needs a bit of fun to help them escape a bit from the weird state of our current world.