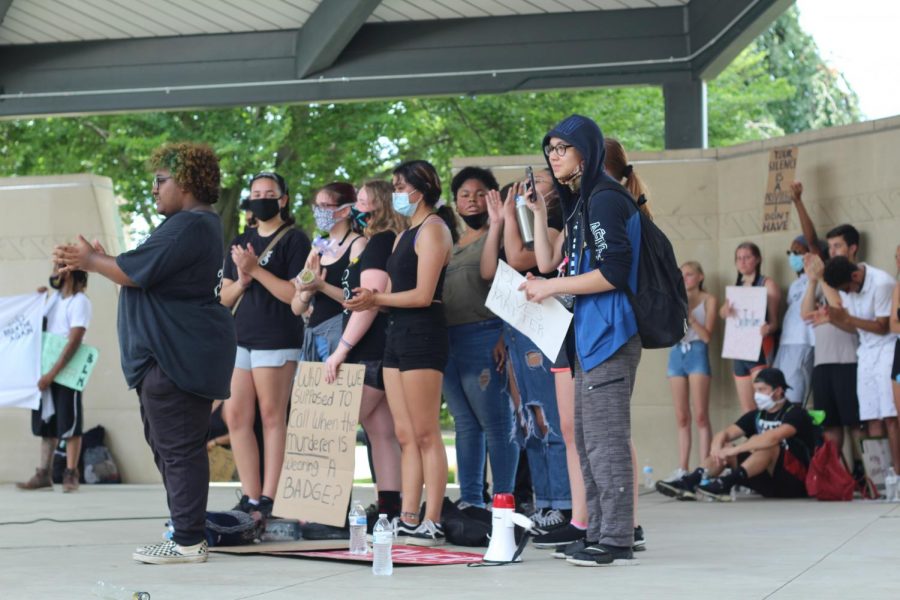 Local students speak to the group of protesters after a downtown Kalamazoo march for Black Lives Matter on June 12. Local students organized this peaceful protest and shared poems and reflections on the topic.

On May 25th 2020, 46 year old George Floyd died after being pinned down by a police officer for nine minutes. While Floyd’s death sadly isn’t the first to happen in this nature, the spread of the video of this event caused a social media uproar and has been the recent spark for protests advocating for the Black Lives Matter movement across the nation.

For members of the Black Community, this has been one of the constant reminders that skin is definitive in their image as a citizen.

“Even though I would consider myself a great student and law abiding citizen, it still feels like I’m at risk of being profiled just because my skin is very dark,” explained Loy Norrix 2020 graduate Henry Parwoth. “It makes me feel uneasy and scared around law enforcement even though I know most of them are there to protect and serve me. It keeps me up at night thinking about how there’s a possibility I could be killed because there’s a clear presence of stigma against black people in America, and there has been since this country was formed.”

The nation is in an uproar. In the midst of peaceful protests where people aim for justice and awareness of racial inequalities, riots have broken out and have skewed the message of the meaning behind these protests.

“Personally I go to these protests to represent myself as a black man,” said Parwoth. “We’re looking for reform in the justice system such as more psychological screenings for police officers, ending no knock warrants, more training as well as encouraging good cops to wean out and hold the not so good cops accountable. Also a way to raise awareness for institutionalized and systemic racism in America. It’s a chance to get people’s attention.”

In response to riots that recently overtook peaceful protests, government officials from  larger cities called upon the National Guard and took other actions in hopes to contain crowds.

Here in Kalamazoo for example, a city wide curfew of 7 p.m. was issued on June 2nd after a night vandalism and destruction of local storefronts such as Terrapin and Gazelle Sports on the downtown mall and other various buildings in the area on June 1st.

Additionally the police force barricaded a large block on the downtown mall in front of the Radisson hotel to enforce the curfew. Kalamazoo is just one example of how city officials took action against rioters.

The issue of the protests has seemed to create an even greater divide on how people feel about the government in the United States.

On the one side, a large portion of the nation seems to agree that these protests are necessary to progress and to ensure justice for those who have lost their lives due to police brutality. Generally, those who riot and those who protest represent two different groups of people.

The goal of the group is not meant to achieve reform or equality through means of violence; however, as violent offenders use the Black Lives Matter hashtag in their routine of destruction, this can lead to a mixed perception amongst the media.

Despite the stigma that has developed from violence in otherwise peaceful protests, Parwoth supports the intentions of the Black Lives Matter Group while protesting. He believes the protests are helping to push awareness of dangerous situations faced by himself and millions of other people due to the color of their skin.

“I don’t want to end up dead because of my skin color or because I’m looked at as a threat, so I’m gonna do what I can to prevent it from happening to me, my friends, or my family.”  Parwoth continued, ”Protesting is one of the ways I feel like I am contributing to a greater cause and I am already seeing the change. Many people have told me they’ve changed their minds about Black Lives Matter and that they now support it because they understand more about it. Those are the wins that no one speaks about and that’s also a step in the right direction for ending racism and police brutality.”

With a large portion of the nation taking action in donating, posting, and attending protests, there is still a long journey to achieving total racial equality in the United States.

Parwoth, like many others, believes that the recent protests are important in order to move forward as a nation.

Parwoth said, “Protesting is a catalyst that gains support for the overall goals of this movement and other movements like it. If the public wants change, change will happen and I believe that 100%. Slowly but surely, doesn’t matter when or how long, or how slow the rate of change is, change is inevitable.”