Lady Knights swimming and diving make history during the pandemic 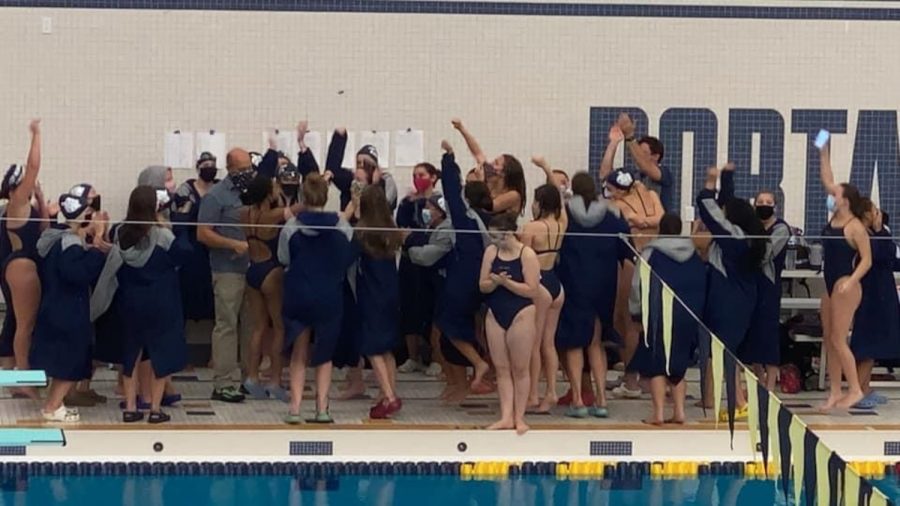 As we are all aware, there is a global pandemic happening right now. School was shut down in March and started virtually this school year. Sports were hugely impacted by the shutdown, with gyms being closed and not opening back up until September 9th.

Student athletes were left to prepare for their seasons by themselves. Many other team members were lucky because they were able to train fairly normally with a lot of the same equipment they usually use. Many swimmers however didn’t have any access to a pool unless they had one in their own  backyard or in Norrix’s case, their coach having one in his backyard.

Head coach, Paul Mahar opened up his backyard pool to as many athletes as he could. There was a very organized and thought out schedule; to accommodate for the COVID rules only two athletes could practice together with an overlap of practices. The athletes would swim for an hour and do dryland exercises for the remaining 30 minutes. So while the previous group was starting their dryland exercises,  the next two athletes would get in the water.

Assistant coach Cameron Beauregard spent his days helping run these practices as well. The coaches’ day started at 7 a.m. and went until 8 p.m. with multiple breaks.

Senior Ellie Lepley who has been swimming for over 10 years said, “The longest I was ever out of the water was probably 2 months, but with the shutdown I was forced to be out of the water for 6 months.”

The girls swim team had to train for the 20-21 season by working out outside. The athletes would do many different workouts including a lot of high intensity interval training (HIIT), workouts which include running and core training.

Senior Emerson Wesselhoff said, “I think it [dry land] was nice because I could feel myself building strength in areas that I don’t normally get too during a normal season, but I missed having meets and almost every other aspect of swim.”

On September 9th, the MHSAA and Governor Whitmer gave all swim teams the okay to get in the water. The athletes had 8 days from when they got back in the water to their first meet, so they worked really hard to be prepared for that meet.

The team swam against 6 teams as of October 15th and so far is undefeated. The lady Knights have never beaten Portage Central or Bridgeman Co-op’s swim teams in Coach Mahar’s 17 years of coaching, but this season, despite the girls not being able to train in the LN pool, they were able to beat both teams. They beat Portage Central 120 to 66 and Bridgeman 109 to 77.

Beauregard said, “It’s exciting because we’ve always been a conference team. Dual meets have never been our strong suit, but this year we’ve swam really strong.”