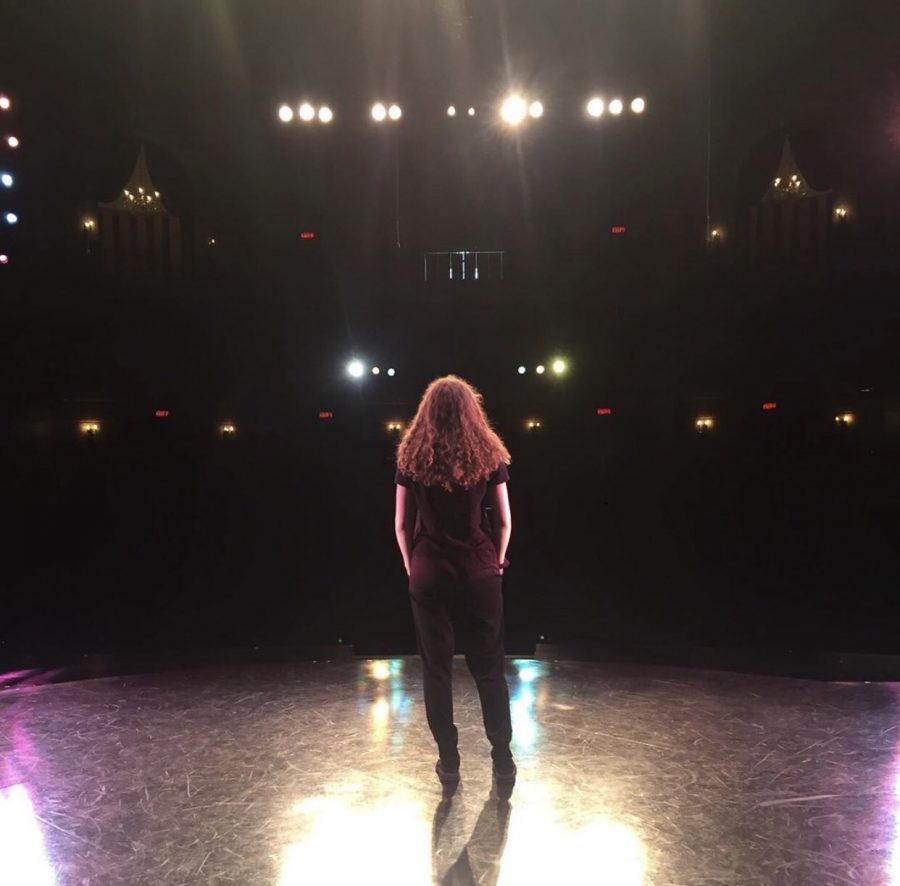 Senior Katie Kutzko stands on an empty stage, looking out at the empty theatre. The lights are still on from the show, but without an audience the theater is silent.

“I’ve met some of my best friends in acting, but those opportunities just don’t exist without theatre the way it was,” Loy Norrix junior Elias Nagel-Bennett said.

On March 12, 2020, Broadway announced that it would be stopping all performances until April 13, 2020. However, due to the risks of public safety involved with over 500 people sitting in close proximity to watch a performance, the date for the reopening has been pushed to May 30, 2021. This has been a catalyst for theaters all over the world to stop performances.

Theatre creates a loving community among actors and crew members, especially at the high school level. It requires comradery and many long hours together, which ultimately brings all the members closer together.

As Nagel-Bennett puts it, “Being in a company, no matter your role or part, was a team effort through and through. Everyone had to learn to work together and grow to enjoy it! In short, you became a well-oiled machine over the course of a production, and you don’t really find that kind of stuff elsewhere at this age.”

However, due to the physical close quarters that theatre requires, actors haven’t been able to perform and form those relationships. This is just one of the many struggles actors are facing during the pandemic. From professional actors wondering where their next meal is coming from, to students feeling anxious to express themselves, this time off the stage has been hard for everyone.

According to the article How Theater Actors Are Surviving During the Pandemic, written by Diep Tran, this struggle has been felt by, “more than 51,000 members of Actors’ Equity Association, the union for stage actors and stage managers, who were all put out of work when theaters shut down nationwide.”

Nagel-Bennett describes his time out of acting as disappointing.

“Acting, for me, has always been about that headspace, that ideal place where you can act and block and do everything else in a seamless way, almost like you’re on auto-pilot for the duration of a show.” Nagel-Bennett continued, “But it’s really something you’ve gotta build over the course of rehearsal, and with all this time away, I’m not sure if I’ve still got it.”

Even though theaters are shut down, this doesn’t mean the work behind the scenes has stopped. Loy Norrix senior Katie Kutzko has been working backstage at The Kalamazoo Civic Theater, even during the pandemic.

“I signed up last school year to do an EFE at the Kalamazoo Civic where I would learn about how the different theatre jobs work. So far I have been coming to the Civic two days a week and learning about different specializations,” Kutzko said.

Kutzko continued to talk about how theatre has changed during the pandemic, causing there to only be two crew members backstage at a time and plenty of space between them and the actors. She is also required to wear a mask and remain socially distanced at all times inside the theater.

“I have not been able to work backstage yet this season, but I hope to for upcoming productions! I wouldn’t be backstage during the show, instead I’d be on the balcony to keep distance from the actors,” Kutzko said

Kutzko added that it’s different working in an empty theater.

“It feels very melancholy, I enjoy being back, but it’s sad seeing it without the busy crew members and actors running to make a quick change,” Kutzko continued, “there’s no stage manager calling cues or an audience to energize.”

Unfortunately, having no audience during shows seems like it will become the new normal for a while. Many major stages are staying closed until it is safe, but smaller theaters are finding ways to adapt.

“So far this year there have been some plays on Zoom and Google Meets, I suspect that will be the majority until covid clears up. There are some places that are doing live plays that are streamed, with the actors wearing clear masks painted a skin tone. I think it’ll go more online and with more tech involved, with less in-person shows due to safety,” Kutzko said.

Nagel-Bennett sees the future of theatre after the pandemic to be different.

“I see no way theatre could stay the same after the pandemic. Sure, society has experienced diseases like this before, but with our deep understanding of it combined with the effect it has had on daily life, there will certainly be hesitance to attend theaters even with safety protocols, and the traveling nature of some performances will be called into question,” Nagel-Bennett said.

But no matter the future, both Kutzko and Nagel-Bennett plan on continuing to participate in theatre in the future. This means that they can use this time they’re not performing in shows to work on the fundamentals and learn more about their art. For Kutzko, this looks like continued volunteering and work at her EFE, and hopefully a future in theatre technology.

Nagel-Bennett, on the other hand, is using this time to work on his monologues and memorization.

“The only real way to feel like I’m retaining this part of my life and not treading water is to do something with what I have,” Nagel Bennett said “Constant self-improvement so when I am in something again, I’ll be better than ever.”