Another election, another reason to dissolve the Electoral College

It’s clearer than ever that the Electoral College needs to go. 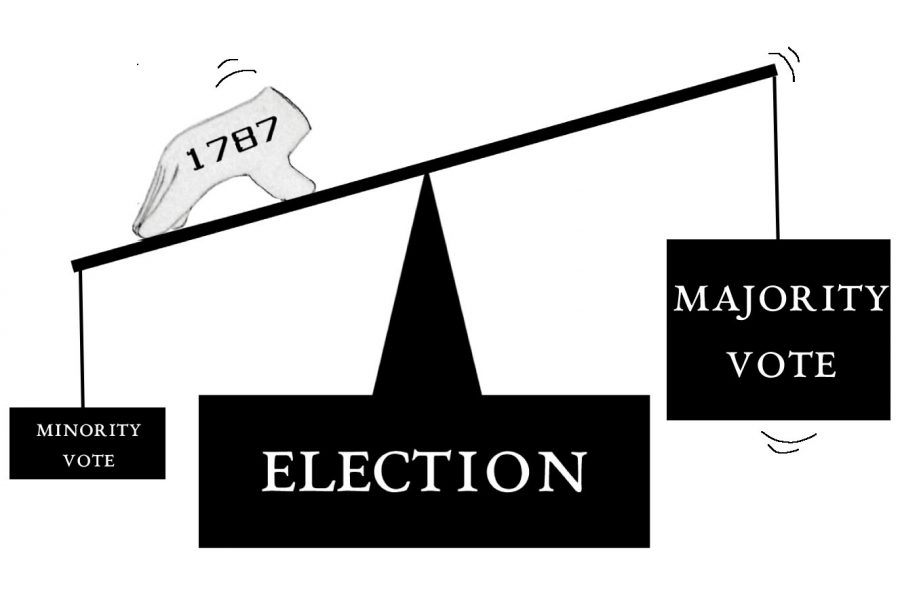 As election season comes and goes, a bitter taste is left in the mouths of many Americans. Aside from the particularly nasty political climate this time around, a lingering issue plagued this election as it had in elections past: the Electoral College.

The Electoral College is an institution of a bygone era; one that no longer fulfills its intended function for a modern population tapped into the happenings of the world. Whether it be reform or outright abolishment, our electoral system needs to be better outfitted for the people of today, not of the late 18th century when it was initially established.

Each state is given an electoral vote for each of its two senators as well as an additional vote for every seat they hold in the House of Representatives. By these standards, states have as many as 55 or as few as three electoral votes. In total, there are 538 electors nationwide, and a presidential candidate needs 270 of their votes to win the nomination.
The issue here lies in the fact that these electoral votes are not always proportional to each state’s actual population. According to data from the 2008 presidential election compiled by FairVote, a single electoral vote from the least populous state, Wyoming, represents about 177,556 people who live in that state. A single electoral vote in the most populous state, California, represents about 668,303 people, more than the entire Wyoming population of 532,668 people.

Under the Electoral College, the vote of an individual living in Wyoming counts for 376% of the vote of an individual living in California. As a staff, we agree that this kind of inequality is not okay. Conceived by the founding fathers way back in 1787, this intermediary institution was created as a compromise between the election of the president by the popular vote of the people and the vote of Congress. This system, though designed to prevent the tyranny of a majority over a helpless minority, achieves the opposite. In some circumstances, it even gives the minority power over the majority if a political candidate plays their cards right.

In the past 20 years, there have now been two instances where the candidate who wins the popular vote by a significant margin still loses the overall election: the elections of 2000 and 2016.

Neither President George W. Bush nor President Donald Trump were the top picks by most Americans, but because they were able to smother the competition in a few crucial swing states, they silenced the still-significant minority vote in those states due to the winner-take-all nature of the system.

There are two states where it’s an entirely different story. In Maine and Nebraska, the electoral votes are split by district rather than the whole lot of votes going to the total victor of the state. This offers a potential avenue to reform the Electoral College in order to better reflect the vote of both the minority and the majority.

On top of ensuring a balance between the minority and majority, the Electoral College is also meant to elect a president with broad regional appeal. This looks great on paper, but after 200 years of politicians doing their best to game the system, they’ve got it down to a science. As previously mentioned, a presidential candidate can secure an election by heavily focusing on swing states, leaving much of the nation unrepresented.

A common concern among supporters of the Electoral College is that without it, a candidate would only be required to campaign in select metro areas, but are we not facing a similar struggle because of the Electoral College? When you compare the options, it’s like picking your poison. We’d pick the poison that reflects the will of the people.
The nail in the coffin for the Electoral College is that it’s based on taking power out of the hands of the people for fear of voters being uneducated. While voter literacy is a very real issue, that’s no reason to deny the citizens of this nation what is supposed to be their inalienable right to choose who will lead them.

More than anything, it’s discouraging to the people of our nation, especially the youth, to see democracy tossed aside so willingly. As a newspaper staff composed entirely of teenagers, it is important to our futures that elections are decided by popular vote and nothing less. Whether it takes complete replacement or radical reform, we need to find a way to approach the electoral mess that we have on our hands.