Local establishments are adapting in order to follow CDC guidelines 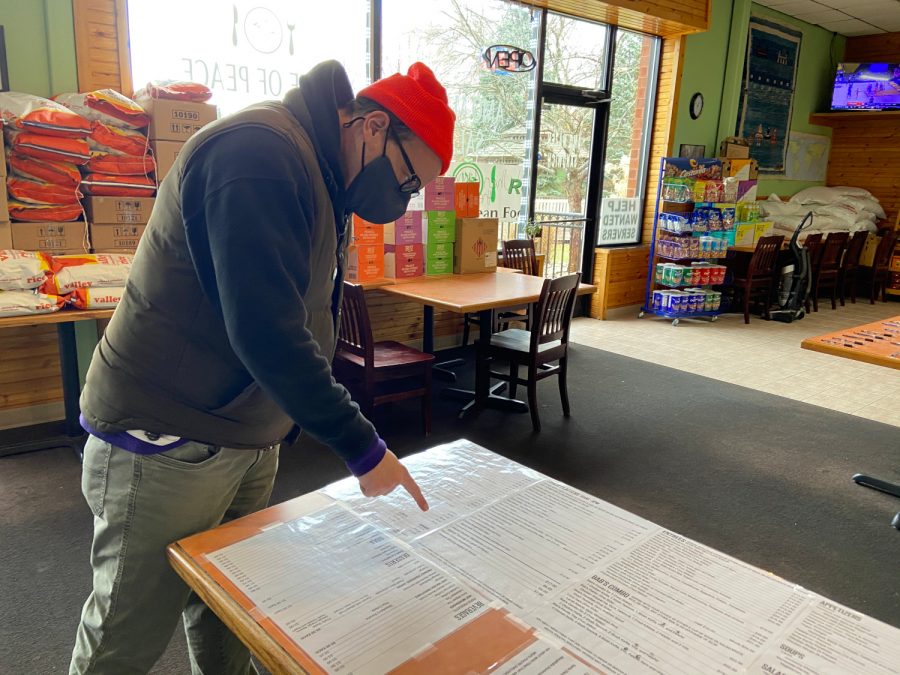 Isaac Turner browses the menu of Bab El Salam. The new method of ordering at the restaurant helps distance the customers from one another.

“I see people happy, and I can see them smile even behind the mask, and they push you to work, to come here and do more work,” said Mazen Ahmed, owner of Bab El Salam, who is implementing a new course of action at the restaurant.

On March 23, 2020, in response to the burgeoning COVID-19 crisis, Governor Gretchen Whitmer signed the “Stay Home, Stay Safe” executive order which required the citizens of Michigan to remain within the confines of their homes, with exceptions for essential workers, shopping for groceries, purchasing gas or medicine and other tasks deemed necessary. This mandate lasted until May 28th.

As of November 18th, Governor Whitmer has released another executive order limiting “non-essential” activities once more, meaning in-person schools, restaurants, and other establishments.

During the initial phase, businesses that were considered “non-essential” took a temporary hiatus, and the drawback as a result was immense.

According to The Washington Post, “more than 100,000 small businesses have shut down permanently since March,” and the city of Kalamazoo was not exempt from this trend. Establishments such as The Union, Moe’s Southwest Grill, Bravo and Finley’s Grill & Smokehouse have all closed permanently since the start of the quarantine phase.

The businesses that have been fortunate enough to remain open have been left with a different obstacle: how to handle the new guidelines set in place by the Centers for Disease Control and conduct business in a safe way.

Tregg Garner, a member of the management team for Sweetwater’s Donut Mill, explained that the new procedures put in place include, “Six foot social distancing stickers on the floor to ensure customer safety, extra sanitizing of touch points, countertops, and other frequently used surfaces and mask requirement for all customers and employees.”

Other establishments have opted for curbside pickup, instead.

The co-owner of Rose Gold Coffee Company, Braden Strayer said, “We’re restricting all public traffic into our physical shop. All orders are delivered curbside to our customers.” Strayer continued to explain that Rose Gold employees are, “required to take their temperature with a contactless thermometer before every shift and must report any illness symptoms they experience through the week.”

Ahmed explained, “We check temperatures. If workers visit somewhere else we have to get papers from their doctor and we check their temperatures with a forehead gun.”

A commonality between business owners currently, is dealing with customers who refuse to adhere to these new precautions.

Strayer said, “We [Rose Gold employees] have had a few interactions with folks that struggle to adhere to guidelines. Typically, it is a good deal of annoyance at us keeping our door closed. Many folks want a cozy place to curl up with their coffee these days, but that’s, unfortunately, one of the most dangerous situations we could put ourselves in.”

Ahmed described an encounter with a stubborn customer who attempted to reject the new rules.

Ahmed said, “I tried to explain to her that the health department is forcing it, not the government, but still she claimed she had a right to not wear a mask. I didn’t want to argue with this lady, so she went outside and she ate, and I gave her my card at the end of the day that said, ‘no mask, no hummus.’”

The overall impact that the virus has had on sales and the foot traffic of businesses has also been a struggle to overcome, as the stigma around food service and food preparation outside of the house has noticeably changed for the worse.

According to CNBC, retail sales dropped by 8.7% during the month of March.

Garner remarked, “The initial quarantine certainly took a hit on our [Sweetwater’s] sales. March was actually better overall than April, which is where we saw the biggest drop-off. Normally we deliver to local gas stations and convenience stores, and those deliveries were suspended at the end of March and did not start again until the end of May.” However, sales did come back strong throughout the rest of May.

Strayer of Rose Gold Coffee Company said, “Since we reopened in June, our business has been reduced to about half of what it previously was and has held steady there.”

On the topic of how the initial quarantine phase felt in regards to the state of Sweetwater’s as an established business, Garner explained, “We definitely felt like we had our backs against the wall. We immediately started trying to cut costs as much as possible. Fortunately, we avoided almost all staff layoffs and business was only down significantly for about eight weeks. I think the recovery through the summer has been strong, and we constantly talk about how fortunate we are that we are able to safely remain open for carry out orders.”

Ahmed said, “I worry every minute because if one guy in the kitchen comes in sick, we have to shut down. Life is getting tough and the world is crumbling, but we hope for the best, and a lot of good people show up in this hard time.”

Despite the drawbacks, so many local business owners show up to work every day and do their part to serve members of the community. Feeling safe in an establishment plays a big role in the customer’s overall experience, and thanks to the dedication to up-to-date procedures, Kalamazoo residents can feel secure.