Sophomore finds fulfillment on and off the page 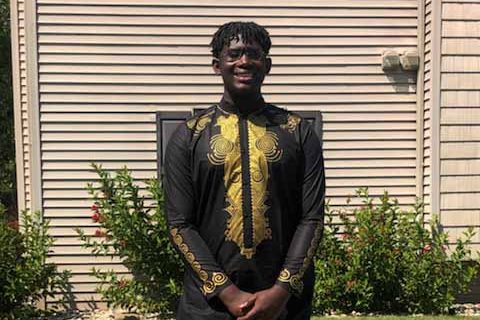 Sophmore Amady Mboup pictured after interview for Original Essay and Short Story submissions in the Short Story and Original Essay. After getting gold star credits in the regional competition , Mboup went on to nationals where he was beaten out for the top three spots.

“When I’m really in the zone, you lose track of time, you type and write faster. The words come to mind. I don’t plan on writing… I don’t spend time going through ideas I don’t like,” said. sophomore Amady Mboup.

Since the 3rd grade, Amady Mboup has been hooked on the process of writing, both in and out of school.

Mboup has always been on the fast track of his education when it comes to English classes. Going to Prairie Ridge Elementary, he would’ve been subject to the ideology of the Language Arts department of KPS elementary levels:  “High and clear expectations, particularly for children, lead to higher achievement and performance,” as is listed at the top of their department home page.

Mboup had been pushed, coming from a household that heavily values intelligence and personal drive, to  make the best of himself with the resources the school provides and the interest he inherently has. Mboup remembers how his conversations with family developed his skills early on:

“[We] like to have discourse around the house, whatever topic comes up. We like to think about it critically and from all the angles,” said Mboup.

His passion for writing was lit early on.

“Around 3rd grade, we would have a little time cut out to write, and one day I decided I wanted to make a creative, fictional story to impress the class,” Mboup continued. “When it finally came out, I came to think this is something I want to do, so it just made sense to go into it deeply.”

Since that point, Mboup has gone into the ATYP program, or the Academically Talented Youth Program, specifically its English branch. This accelerated program is designed to foster those who are accelerated in their understanding of a topic and wish to go into it further, even onto the college level while still in High School.

In fact, Mboup has no mandatory English classes for his entire time at Loy Norrix, due to advancing his work in the 7th and 8th grades.

The ACTSO is a national association that hosts contests for essays, stories, and creative writing. Over 500 kids participated in Michigan’s contest for short stories alone, so the competition is fierce! Mboup wrote two papers, short story and original essay. Both made it to the national level. Mboup also states that his writing bleeds into his mannerisms.

”I think my writing skills affect how I talk, sometimes you just say a word that’s very complex: you expand your vocabulary and make it more… interesting,” Mboup said.

If you talk to him, you can tell. Mboup speaks in a very refined and careful manner, making it clear his words are true.

When asked about his hardest moment in writing, Mboup talked about troubles in ATYP.

“I was having trouble keeping up with the work, I regret not being more prepared, and productive,” Mboup said.

“I’m enjoying my classes this year, it’s definitely different from middle school and even last year, but it just feels good to be back in school. I just need that stimulation for my brain, keeping it moving.”