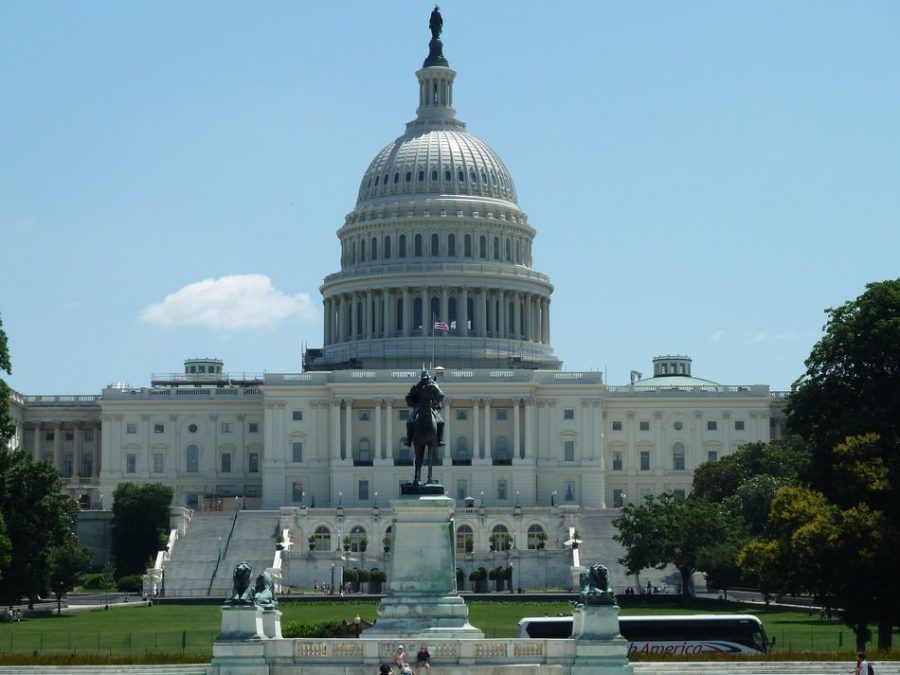 The photo shows the United States Capitol building. In which the House of Representatives and Senate are housed, and decisions are made.

The Kalamazoo Public School administration proposed an idea that would limit the required credits of U.S. Government class, making it only one trimester long instead of two trimesters and removing key topics such as civil rights and civil liberties.
Because of this proposal, the board has faced a lot of backlash from government teachers, parents, students, and community members alike, and has since postponed the meeting to discuss and make a decision, originally set to be on Dec. 3.
The board meeting to make a decision has been further postponed until next school year in an effort to get more information from teachers and community members.
“One of the recommendations was to modify the government credit requirement from one credit to a half (.5) credit. The Michigan Merit Curriculum requires a half (.5) credit of civics or government. The one-credit requirement is a KPS requirement. The recommendation to modify to a .5 credit would have merged Government A & B into one course,” said KPS superintendent Dr. Rita Raichoudhuri in an email to KPS teachers.
This means KPS’ current curriculum requires .5 more government credits than the state of Michigan does. The proposed change to the curriculum would make it so that it will require students to learn fewer objectives.
The school administrators proposing this decision hope this reduction of the government requirement will allow more “options for courses that students may wish to take based on interest and college/career aspirations,” said Dr. Raichoudhuri.
However, some teachers like Niambi McMillon, a Loy Norrix government teacher, are understandably upset about this proposed change.
“In this age of respecting diversity [of all groups], I see this as an indirect statement of believing that civil rights and civil liberties are not important enough to the district to continue to teach,” said McMillion. “I am appalled and disgusted that those diverse groups that are employed with the district would morally and ethically take such a stance to remove them,”
AP government teacher Michael Wright agrees with McMillon.
“I think that the decision is a tone deaf one, made at the worst possible time given recent events domestically and internationally. I understand the need for making the best use of resources and that the State of Michigan only requires one half-credit in government or civics,” continued Wright, “but KPS has the opportunity to stand out and say that we care about the understanding that our students have for how their government functions and the importance of civic engagement by maintaining the courses as they are.”
Being informed about the U.S. government is extremely important. Especially in the current state of the world, as well as historically.
“Historically, people being ignorant of how their government functions, its activities and intentions always leads to hardship and suffering,” said Wright. “Only a handful of students will use what they learned in calculus, but the actions of our government will affect all of us throughout our lives. Knowing how to control that and take ownership of it are more critical than any other subject that we are exposed to as Americans.”
Knowing how the government works will always be important for students. Students will have to use the knowledge they acquired in government class. When someone is under-educated about the way the country is run, it will cause problems for not only current generations but all generations afterwards. Being ill-informed can cause a large spread of misinformation, which is not good for our democracy.
An example of this harmful spread of misinformation can be seen from President Trump and his supporters, believing that the absentee ballots were not legally cast votes. This has been proven to be incorrect based upon multiple lawsuits. As can be seen in a lawsuit against Michigan, AP News detailed their article “EXPLAINER: Trump’s challenges fail to prove election fraud,” “There is no evidence anyone miscounted votes out of political motivation.”
As the Trump team attempted to prove voter fraud, they could show no proof that any fraud happened.
To vote in the United States, you must be a United States citizen, be 18 years or older, meet your states residency requirements and most importantly you need to be alive. This is a very important piece of information learned in government class, if the number of credits needed from a government class is cut, time for learning valuable information such as this will be lost.
We reached out to the director of secondary education for KPS, Johnny Edwards, for more information on the topic. Edwards responded saying “Unfortunately, there is no information to share related to the topic you wanted to discuss.”