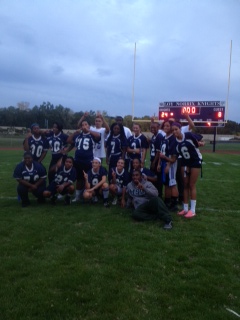 Seniors win 24 to eight. They stand proud with their coaches in front of the score board. Photo by Kiosha Miller

Excitement and anxiety filled the football stands. It was time for the annual girls’ flag football game. This year the game kicked off the week on Monday, October 1st by lighting the fuse to the homecoming bomb.

It was juniors against seniors.  There were 31 junior players who wore blue decorated T-shirts and 14 seniors who wore Loy Norrix football jerseys.

Taber also said, ” Being a coach was a good experience. It was difficult at times trying to teach girls to play football.” Terrehl Kelley, Joe Boggan and  Jaxson Schrock coached the juniors.

At the beginning of the game the seniors quickly took the lead leaving the juniors in the dust.  The juniors had no chance of winning. At the end the seniors won a game well played. The final score was seniors with 24 and juniors with eight.

Junior Kalia Blackeagle said, “It was a lot of fun. I loved getting support from the other students, also our student coaches were great.”

“I felt like I was a real football player,” said senior Zinziey Ndlou.