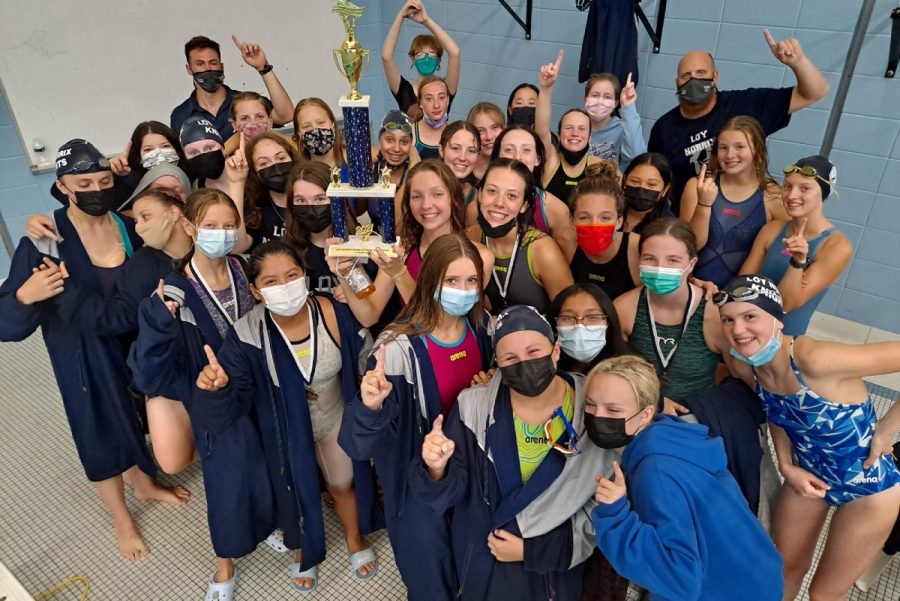 Loy Norrix swimming team holds up the number "1" after winning their meet against PN.

You can hear the water splashing as well as the student section cheering during the Loy Norrix women’s varsity swim meet against the Portage Northern High School Huskies.

On October 12, the meet took place at Portage Northern and the Knights did not come to play. The team started the season strong and alongside head coach Paul Mahar, they took the win with a final score of 101-84.

The Knights will be competing against Portage Northern again this November, and the 2021 M.I.S.C.A. diving meet this October as well the SMAC Conference in November.

With the season coming to an end in November, the strong team of swimmers is giving their all. These next two months will be loaded with practices and meets to ensure that they keep their winning streak as well to ensure they do their absolute best at the SMAC conference, where a series of divisions of schools all around South Michigan engage in competitive events to see which school wins.

“How I feel about the SMAC conference is both excitement and nervousness, but mostly excitement,” freshman Audra Tate said. “I’m only a freshman and it will be my first time swimming at the conference, that is where the nervousness comes in. The best part is that I will be there for my teammates and support each other throughout the whole meet.”

When working as a team, the main focus can’t be an individual problem because you’re only as strong as your weakest link. When you work with your team and build up together, success rates rise.

“Now that we’ve beat everybody, the conference sounds more exciting,”  said freshman Elosie Dunfee. “The best part about the team is the culture. Over the last month, we’ve done several team bonding activities and gotten to know all of our teammates. The swim deck is a safe place for everyone on the team and we hope it continues to be so.”

With less than 9 weeks left, the team is becoming more responsive and is ready to finish the season off strong.

Senior Gina Bello who has been on the team for all four years of her high school experience reminisced saying, “I am trying to cherish and engrave the moments that I still have left with my girls for the next month and to make memories so that I won’t forget them and that they don’t forget me.”