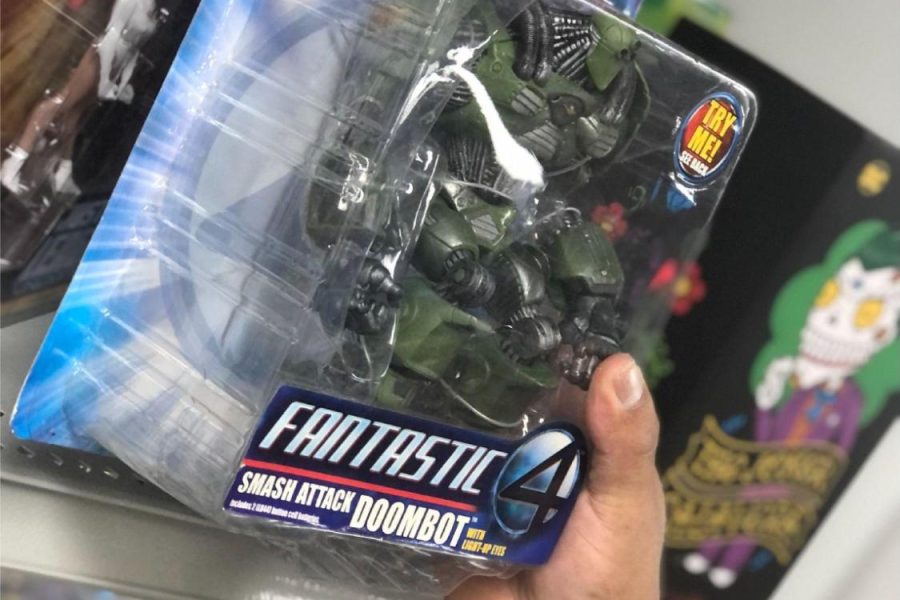 At Rocket Comics, Jonathan Aguilar slowly reaches his hand out to grab the Doombot appearing in The Fantastic Four comics books. It is one of the many collectibles and comic book characters at Rocket Comics.

The soft crinkling and rustling of old comic books is heard throughout the store as the bright sunlight pours through the big rectangular windows, lighting up the entire business with a bright radiant white light, giving a sense of warmth.

Rocket Comics is a small business here in Kalamazoo located at 4235 Portage Street. They sell vintage toys, comic books and sports cards. Like many small businesses around the world, Edgar Aguilar, the owner, had to close his store due to the pandemic in March of 2020.

Many people around the world had to work from home. Rocket Comics employees were among this group of people working from home when the store was closed for 6 long, lonely months.

“It was hard running something that was supposed to be in-person and around people,” said Aguilar.

“The pandemic really helped us learn how to do more things online,” Aguilar said, “We’ve been able to sell and post our products on Twitter, Facebook, Instagram, and Reddit. I never really planned on using things online as much as I have, and it has really become a tool that we now use at Rocket Comics.”

The store has gone through many hardships, making it much harder to achieve goals. Recently, Rocket Comics has also expanded the store, bringing in more room for shoppers and collectibles.

“The store has not drawn in new people because we are still working on it, but I really hope it will soon,” said Aguilar.

Aguilar has been posting more updates about the new side of the store, hoping more people will come see it. Aguilar also anticipates that older customers will stop in the store and spread the word to other people.

The pandemic helped Aguilar with obtaining the new side of the store, the business right next door was a karate class, Valor Martial Arts, went out of business and Aguilar was able to quickly snatch it up.

Along with the new expansion, Rocket Comics has been doing everything they can to keep their customers and staff healthy. All staff at Rocket Comics are vaccinated, and people are required to wear masks if they are not vaccinated. The staff cleans and disinfects all surfaces, as well.

In the meantime the store will continue to be open and provide a helping hand to the people who love comic books and the world of fantasy.