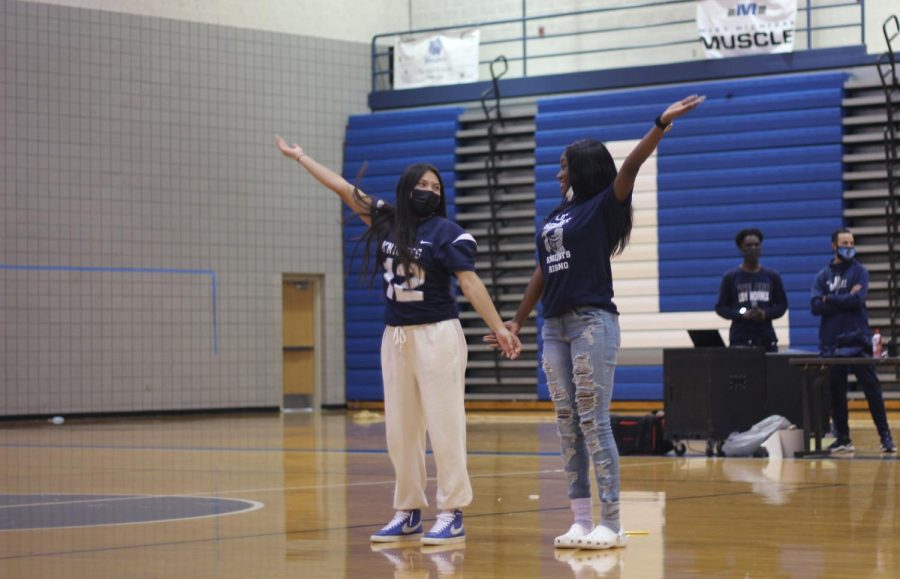 Senior Integrity nominees: Destiny Clark and Neida Jaimes dance together after their names were called during the pep assembly.

The week of October 11, 2021 was the beginning of Loy Norrix’s spirit week during where student Knights showed off their school spirit.

“I think pajama day was great because it gave us students a chance to be more comfortable while learning, and it was cool to see other people’s fun pajamas,” said junior Nadia Abbott.

Tuesday was twin day and there was double everything with multiple different pairs walking down the hallways.

“My twin was Mackenzie. We wore jeans and blue flannel with a black shirt. We may not have looked exactly like twins, but twins at heart,” said senior Tanner Klute.

Wednesday was a formal day and Knights showed up wearing all types of classy.

“I enjoyed it. I wore a dress that was from the ’50s that I got for a good buy and felt really good,” said senior Eluebeth Helms.

Thursday was decades day and students dressed from the early 2000’s all the way back to the early 18th century to show their school pride.

“The energy was good that day. It was dope like the ’80s,” said senior Destiny Clark.

Friday was the end of the spirit week celebration, the day of the homecoming game and pep assembly. Students showed their spirit and were decked out in their blue and white.

“I saw the whole school wearing blue and white. Iit was really good to see the school together,” said junior Tierra Carson.

During the Friday school day around 1:20 pm, the annual homecoming pep assembly was held and students were not disappointed during the activities that took place.

“It was pretty fun, good to enjoy homecoming in person this year,” said senior Issac Rojo.

Students enjoyed athletic director Andrew Laboe lip syncing  and dean of students Erin Anderson keeping us hip with one of the most popular TikTok dances.  There was also an entertaining dance routine by both new assistant principals, AJ Muysenburg and Alex Hill.

“They did pretty well. I enjoyed the teachers dancing as well,” said sophomore Riley Ketchum.

After the pep assembly students left campus, but some returned again in the evening at 6 p.m. for the Homecoming parade and at 7 p.m. for one of the biggest home football games of the 2021 fall season homecoming game.

Starting promptly at 6:15 p.m. at Milwood elementary, the marching band led the cheerleaders as well as the homecoming court down Lovers Lane and ended at Griffith Field, where football players played a difficult game against Gull Lake High School.

During halftime, the homecoming court was announced for the freshman, sophomore, junior, and senior classes. Winners were for homecoming were:

“It was really fun to dress up and be included during senior year. It was a really fun night, and I enjoyed myself,” said senior nominee for the Honesty Award, Emma Atkinson.

Andrew Laboe and his athletic team worked hard to produce homecoming with the coordination of the parade, finding students to participate in the different pep assembly events, and decorating the football stadium to make sure that homecoming wasn’t your typical Friday night football game.

“Being even more special this year coming off of virtual schooling that was in-person.It was great to see how much the students got involved,” Laboe said.