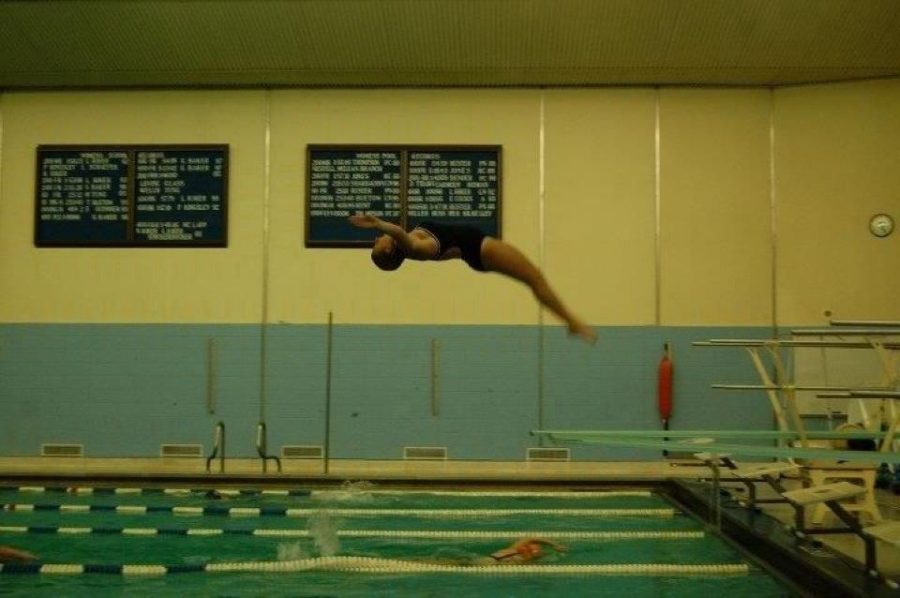 Diver Jena Burkey practices every day at Loy Norrix. The team hopes to be more united than ever before this year.

She stands at the tip of the board. Her mind at a level of focus that not many can understand.

She jumps, a micro second in the air and splash. Her head bops up automatically searching the board for

school. Gymnastics serves as a good background when beginning to dive, because you already know

aerodynamics of the dives. The way they dive makes diving seem effortless and beautiful, but to achieve

what they do takes years of practice and muscle control. Disciplining your limbs to do as their told while

look then mimicking it to the best of her ability. Divers are literally judged from the moment they step onto

the board to how their bodies meet the water.

There is also a dangerous element to diving. A small miscalculation could result in injury. The

most common type of diving injury is called “smacking”. Smacking is basically belly-flopping onto the

water, landing parallel to the water “smacking” your body onto the water. This usually only results in mild

Each of the girls has felt the sting of smacking the water but just accepts it as part of the sport.

The other risk of diving is hitting the board. Over the course of a diver’s career it is common that

the diver will hit their hands or feet on the board. Usually this is minor and only causes some scrapes and

bruises. Cox worst experience with hitting the board was while she was at camp and she was attempting

a dive that tore her hands up. She says it was painful, but she recovered.

All the girls have different opinions on diving and how they feel about it, but all of them can agree

that their favorite part about diving is being on the team itself. And by the team they mean the Loy Norrix

Women’s Swimming and Diving team. When Burkey took a break from diving her sophomore year to go

back to gymnastics she truly felt the absence of her team.

At one point there had been a struggle with a divide between the swimmers and the divers. The

prepare. The divers would often miss these because they were still in practice.

This year things have changed in order to unite the team as a whole. Pasta parties aren’t allowed

to start until 6:00 PM which is when the divers get out of practice, and the swim team just makes an all

around better effort to support the divers. The swimmers sit on the sidelines while they dive and create

“I feel really lucky to have the swimmers. At yesterday’s meet [Harper Creek Invitational Oct.

and support the divers,” said Muscara.

Even though there are many challenges in diving, the team works together to overcome

each struggle. The divers are supportive within each other because they’re the only ones who really

understand what their sister is going through.

“Diving is a very difficult sport both physically and mentally, so I really have to push myself. I

always feel great though when I know I’ve improved and achieved my goals,” said Cox.