Off campus lunch: a potential chance to get away from the craze 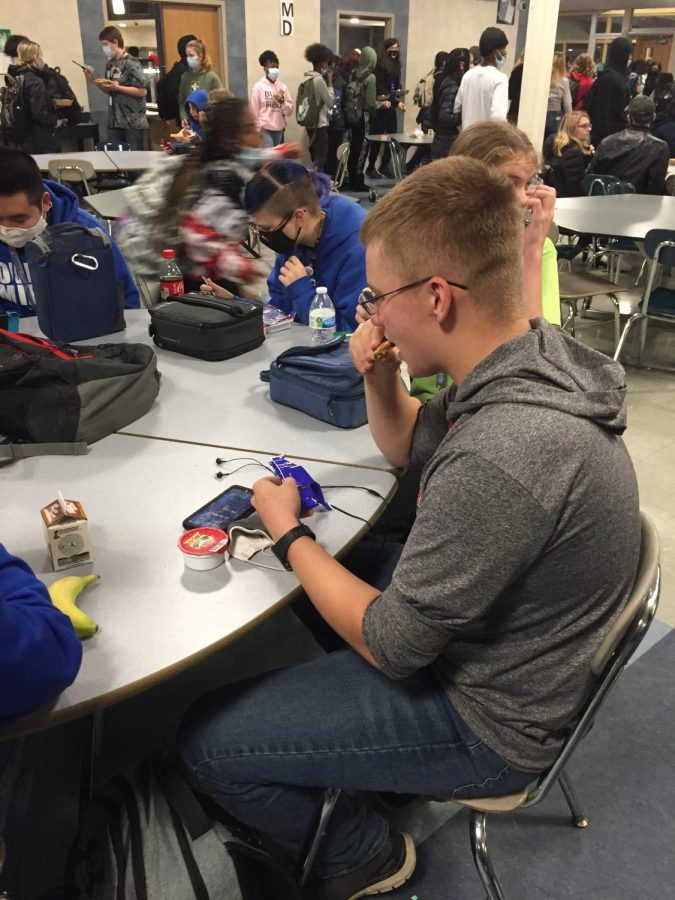 Junior Curtis Chapman eats his lunch in the Loy Norrix cafeteria. Many students like Chapman wish to go off campus to get something to eat.

You see it in the cafeteria every day, three times a day; hundreds of students crowding the room, all close to each other, most not wearing masks to eat their lunch. The sight and thought of this is cause for worry among many students around Loy Norrix and some people want an alternative.

Off-campus lunch is an option that’s been considered by many students across the school and across the country. The idea of going away from school to get your own lunch appeals to many. Some students want to reduce the risk of spreading COVID-19 around the school at lunch and others just want some peace and quiet.

“I think seniors should have it because we are responsible enough to go and come back for the 30 minutes we get,” said senior Luis Sanchez.

Former students outside of Loy Norrix also agree that kids should have the choice to go somewhere else for lunch as long as they come back. According to a report by AP News, students at Bethesda-Chevy Chase high school outside of Washington D.C. are able to freely leave the school for lunch. With a population of 2,600, if bigger schools can make it work, then so could Loy Norrix.

“For me, it was really great because I don’t like to be cooped up inside,” said Rachel Kirkpatrick, a former student of that school, in the interview with AP News. “It gave me a little mental break.”

Off-campus lunch would also be beneficial for the school itself, due to the lower costs of providing food to kids who still stay on campus. This money could be used to pay for things such as more teachers and more books, computers, and other supplies for students.

There may be some drawbacks to having off-campus lunch, however. Some students would take it as an opportunity to leave school for the rest of the day and go off to do something else. There may also be some complaints from parents about their children being able to wander off and not being monitored enough.

While some kids may leave for the rest of the day, the school would have the authority to punish those kids by giving them detention or taking away their lunch rights for a short time. If they continue to do it, the ban would be longer for those students.

“I feel like if you come 5 minutes late, then it should be a verbal warning”, said Sanchez, “but if you are 3 hours late, then you should lose that privilege”.

Overall, students should have the right to go off campus for lunch to get away from the risk of disease, gain some peace and quiet, or be alone with friends. Most juniors and seniors, especially ones with a driver’s license, are responsible enough to come back at the end of the period. Those who do not could be easily punished. This  policy could work for Loy Norrix and should soon be implemented for juniors and seniors.