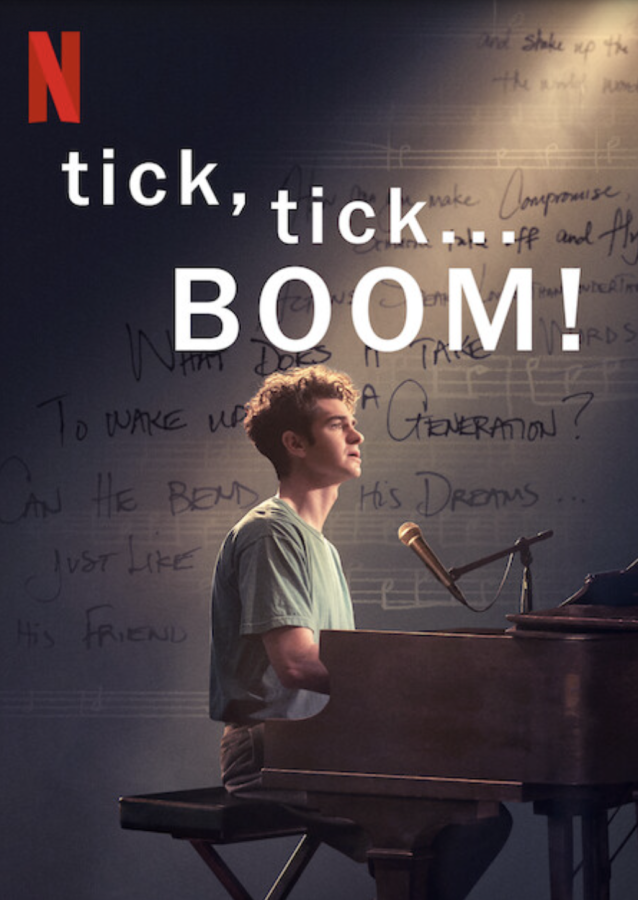 “Tick, Tick… Boom” is the story of writer and musician Jonathan Larson, who is best known for writing the musical “Rent.” The musical/drama tells the story of Larson while he is stuck in a slump trying to write the final song for his first musical “Superbia” with the musical’s workshop date looming increasingly closer. The movie is shot in a workshop format using a melodramatic-cabaret style that was popular in the 90’s to tell the story of his second musical, a rock autobiography: “Tick, Tick… Boom.”

The movie was released on Netflix on November 12 this year and features actors like Andrew Garfield, Alexandra Shipp and Vanessa Hudgens.

The movie begins with a simple introduction: an old video clip of Jonathan Larson (Andrew Garfield) walking onto stage in a brick building in front of a band. The crowd applauds for him as he stands in front of a microphone before quieting and the first lines of dialogue are spoken: “Hi. I’m Jon.”

After this Larson proceeds with a monologue discussing how he’s been hearing “this strange ticking noise” and at the end of the final sentence, it cuts to the title screen: “Tick, Tick… Boom” written in script font.

This seemingly old video clip is from a performance of Larson’s second musical, for which the movie is named.  The video intersperses the performance with scenes that correspond to what’s happening in the musical at the time. For example, when Larson is singing about how his friend has contracted HIV, it shows the memory of that happening as a scene in the movie. This creates an interesting effect of cut-up scenes that cause the story to make both more and less sense at the same time. The song relates to the scene playing at the time, but it also makes less sense because it makes it easy to lose track of what is happening.

The soundtrack to the movie is phenomenal, including a complete revamp of the order the soundtrack is played in from the original musical.  An example of this is the song “Boho Days.” In the new Netflix adaptation, “Boho Days,” is the second song we hear, which is a more appropriate place to put the song. The scene feels more lighthearted and fun which matches the feeling “Boho Days” generates.

Also, the songs sound very different with the two different singers. Raúl Esparza´s portrayal of Larson in the original musical sounds breathier, and the songs don’t sound as intense when performed by Andrew Garfeild.

The female singers also sound different: Alexandra Shipp and Vanessa Hudgens in the Netflix film sing in more of a belt and also drag out the notes, making the songs more emotional. Conversely, the original singer, Amy Spanger, sings all the notes very short which makes the soundtrack feel more blunt.

Vanessa Hudgens is a good choice for Karessa Johnson because of her previous experience singing in the “High School Musical” trilogy. This  is proven further in the song, “Come to Your Senses,” a duet between her and Shipp.

It was also very nice not to hear autotune, a voice modifying program generally used for singing, in the songs as some actors use it when singing in movies, such as Emma Watson in the recent “Beauty in the Beast” remake.

Andrew Garfield was not someone pictured in mind for the role of Larson, but is a pleasant surprise. Garfield is known more for his roles in movies such as the “The Amazing Spider-Man” series: more action-based roles, rather than musical roles. Any doubts about his performance are immediately cleared after just the first song. His voice is rich and deep when it needs to be and can also sound very emotional when the scene calls for it, making the soundtrack amplify the emotions in the scene.

Furthermore, the sets are all very well-designed and feel very realistic. The apartment where Larson lives looks like a struggling artist’s apartment. Just the small clips where Larson walks along the streets that are covered with flyers, posters and graffiti add another layer of realism. And the diner set, Moondance Diner, where Larson works, embodies the actual environment of a diner with the rushed pace of the busiest hours of the day, the pushy customers and the cooks working double-time.

The story is also very emotional, from the surprise of Larson hearing a message from his idol, Stephen Sondhiem, on his messaging machine, to the shocked sadness of finding out his friend is HIV positive. All of the feelings the movie is trying to convey, are conveyed and done so supremely well. It is a trip of laughter and sadness.

The movie-musical adaptation is also very different from just the musical version. The little changes such as the reason why Susan breaks up with Larson being different to Larson not even being employed in the original version, makes a world of difference when it comes to plot line.

Lin Manuel Miranda also did a great job directing the adaptation of the musical, striking a healthy mix of dialogue and singing. Where in other works he’s created such as “Hamilton” there is only one line of dialogue, and the rest of the story is told in song which feels unbalanced. In “Tick, Tick… Boom” the spacing between the songs played helps the film move along at a smooth pace.